The Pharaoh Hound is a very ancient breed, with a striking resemblance to the hounds depicted in the Egyptian temples from before 4,000 B.C. and to the dog god, Anubis. Though a Sighthound, they are unusual in that they are able to use both scent and sight for hunting. Due to the relative isolation of the island of Malta, they have bred true to form there since about 1,000 B.C.

The Pharaoh Hound was recognized by the United Kennel Club in 1983.

The Pharaoh Hound's appearance is one of grace, power and speed. They are a medium-sized dog with clean-cut lines. They have a noble bearing, and are graceful and well balanced, and have an alert expression. They move free and easy and are very fast. Any deviation from the breed standard is to be penalized to the extent of the deviation.

The Pharaoh Hound is intelligent, friendly, affectionate and playful. They are alert, active and very fast, with a marked keenness for hunting, both by sight and scent.

The head resembles a blunt wedge when viewed either from the top or from the side. The planes of the skull and foreface are parallel, and the muzzle is slightly longer than the skull.

The skull is long, lean and well chiseled. There is a slight stop.

The muzzle is long and powerful, tapering slightly from stop to tip.

The moderately deep-set eyes are oval in shape. They are amber colored, blending with the coat; and have a keen, intelligent expression.

Flesh colored, which blends with the coat, is the only acceptable nose color.

The large, fine ears are medium high set and carried erect when the dog is alert. They are broad at the base and very mobile.

The long, clean neck is lean and muscular. There is a slight arch, allowing the head to be carried high.

The long, sloping shoulders are well laid back. They are strong without being loaded.

The forelegs are straight and parallel. The elbows are well tucked in. The pasterns are strong. Dewclaws may be removed.

The body is lithe. The length of the body, measured from the breast bone to the haunch bone, is slightly longer than the height, measured from the withers to the ground. The topline is almost straight; there is a slight slope from the croup to the root of the tail. The brisket is deep, reaching down almost to the point of the elbow. The ribs are well sprung. There is a moderate tuck-up.

There is a moderate sweep to the stifle. The second thigh is well developed. When viewed from behind, the legs are parallel. Dewclaws may be removed.

Strong well knuckled and firm with deep pads, the feet turn neither in nor out. Dewclaws may be removed.

The tail is medium set and fairly thick at the base. It tapers like a whip, reaching below the point of the hock when in repose. When the dog is in action, the tail is carried high and curved. It should not be tucked between the legs.

The short, glossy coat ranges from being fine and close to slightly harsh. There is no feathering. Any blemishes or scars are not to be considered as faults.

Tan or rich tan, with white markings allowed as follows:
a white tip on the tail is strongly desired;
white on the chest, referred to as "the star";
white on the toes;
a slim white snip on the center line of the face.
Flecking or any other white is undesirable.

Movement is free and flowing, the dog covering the ground well without any apparent effort. The head is held fairly high. The legs and feet move in line with the body.

Faults: Hackney action. Any tendency to throw the feet sideways. 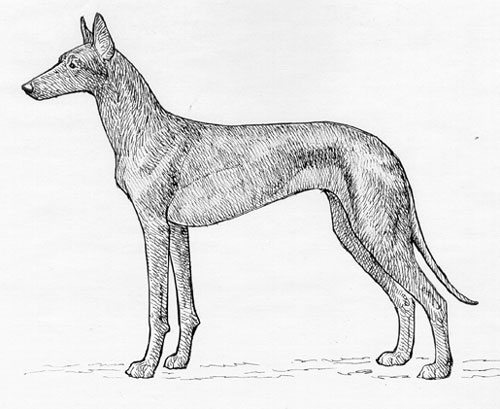