After bull-baiting was banned by the English Parliament in 1835, the English Bulldog eventually developed into a shorter-legged, thicker, companion version of its working predecessors.
Bulldogs that are made to be massive, with excessive nose wrinkle, and muzzles of insufficient length, are unfit for an active, healthy lifestyle. For this reason, English Bulldogs of moderation are preferred.

The English Bulldog of today would not be recognized by fanciers of the earliest dogs of the breed. Those early dogs had a specific use, that of bull holding, which was a legitimate part of the butcher's business. Unfortunately, this also developed into the grisly sport of bull baiting, and they were also pitted against other animals, as well as their own kind. When these “sports” were outlawed in Britain, the breed's function essentially ceased. The Bulldog eventually developed into a shorter, squattier version of its progenitors, as that is what was preferred in the show ring. Regardless, the Bulldog has endeared itself to many because of its loving, gentle temperament.
The English Bulldog was recognized by the United Kennel Club in 1935.

The ideal English Bulldog is a medium size, short coated dog with a thick body that is wide and heavy in the shoulders and lighter in the hindquarters. When viewed from above, outline should be a pear shape.
He is powerful and compact, with a head that is fairly large, short and broad in proportion to the size of the dog. General appearance, coupled with attitude, suggests great stability, vigor and strength. The dog appears fit and capable of great athleticism.
When comparing both sexes, due consideration is to be given to females as they do not bear the breed characteristics to the same degree as the males.
All points of the standard are well distributed and bear good relation one to the other. No feature is so prominent or so lacking that it makes the animal appear deformed or out of proportion, nor should excess, in any part, negatively interfere with the breed’s natural gait.

The English Bulldog has an equable and kind disposition; and is resolute and courageous. The characteristic demeanor is one of peace and dignity. These attributes are evident in the expression and behavior of the breed.

When viewed from the front, the head is broad and square. In profile, the head appears high and moderately short from the occiput to the point of the nose. The forehead is flat, never rounded or domed; and never too prominent nor overhanging the face.
The well-defined temples (frontal bones) are broad, square and high, causing a deep furrow that extends from the stop to the middle of the skull. The stop is a deep, wide indentation between the eyes. The well-rounded cheeks protrude sideways and outward beyond the eyes.

The skull is relatively large in circumference, and appears high from the corner of the lower jaw to the apex of the skull.

The relatively short face is measured from the front of the cheekbone to the tip of the nose. The muzzle is turned slightly upward and is very deep from the corner of the eye to the corner of the mouth.
The distance from the bottom of the stop (between the eyes) to the tip of the nose should not be less than the distance measured from the tip of the nose to the edge of the under lip.
The jaws are broad and very square. Jaws should not be wry.
The thick, broad, pendant flews, referred to as the "chops", are very deep. They completely overhang the lower jaw at each side. In front, they join the under lip, covering the teeth, which are not noticeable when the mouth is closed.

A full complement of large, strong, white teeth meet in an undershot bite. The canines are wide apart; and the incisors are in an even, level row.

Eliminating Faults: Teeth or tongue showing when the mouth is closed.

The very dark eyes are quite round and moderate in size; never being sunken nor bulging. When the dog is looking directly forward, the lids cover the white of the eyeball. There is no haw showing.
Viewed from the front, the eyes are situated low down in the skull well away from the ears. They are set in the front of the head and are wide apart but with their outer corners within the outline of the cheek, when viewed from the front. The eyes and the stop are set in the same straight line. Eyes are free from entropinism, cherry eye, and excessive amounts of loose skin. No white is showing while the dog is looking straight ahead.

The nose is large, broad and black in color. Its tip is set back deeply between the eyes. The wide, large nostrils are open. Nose roll does not protrude over the nostrils, constricting breathing.

Very Serious Fault: Any nose color other than black in adult dogs.

Eliminating Faults: Pinched nostrils. Over-nose roll, even if broken, that covers any part of the nose.

The small, thin, "rose" ears are set high on the head. The front inner edge of each ear joins the outline of the skull at the top back corner of the skull, placing them wide apart and well away from the eyes.

The short, thick neck is deep, strong, and well-arched. The skin is moderately loose, thick and wrinkled, forming a dewlap on each side from the lower jaw to the chest.

The shoulders are very broad and muscular. They are widespread providing stability and great power.

The fairly short, stout forelegs are straight and muscular. They are set wide apart. The legs themselves are not curved or bandy. The low elbows allow free movement of front assembly. Pasterns are short, straight and strong.

The body is moderately short and well knit, with stout limbs, well-muscled, and in hard condition, with no tendency toward obesity. The brisket and body are very capacious, and the chest is very deep and well let down between the front legs. Forechest is prominent. The body is well ribbed up behind the forelegs, and the ribs are well rounded. The back is short and strong, wide behind the shoulders and comparatively narrower at the loin. The topline is a distinguishing characteristic of this breed. There is a slight fall off behind the shoulders to the beginning of the back, which is the lowest part of the entire topline. It then rises to the loin, which is higher than the shoulders. The croup then curves downward to the set on of the tail, creating the arch that is distinctive to the breed. The belly is tucked up. When viewed from above, the English Bulldog’s outline should resemble a pear shape.

The rear legs are strong and large, and they are slightly longer than the forelegs, which elevates the loin above the shoulders.

The compact, thick feet are moderate in size. The toes are well split up and have high knuckles. The front and rear feet may point straight ahead or slightly outward. Flat feet or splayed toes should be penalized.

The short tail is set low, and has a thick root, a decided downward carriage and a fine tip. It may be straight or "screwed," but never curved or curly. A straight tail is cylindrical and is tapered uniformly. A screw tail has well-defined bends or kinks that may be abrupt or even knotty, but no portion of the tail may be elevated above the base or root. Absent, inverted or extremely tight tails should be heavily penalized.

The skin is soft and fairly loose, especially at the head, neck and shoulders.
WRINKLES & DEWLAP - The head and face may display some wrinkles. There should be two folds forming the dewlap at the throat, from the lower jaw to the chest.

The short, straight coat lies flat and close, and is smooth, glossy and of a fine texture. There are no fringes, feathers or curls.

Coat color is uniform, pure, and brilliant. The various breed typical colors are to be preferred in the following order:
1) Red brindle;
2) All other brindles;
(Note: to be considered perfect, brindles are to have a fine, even, and equal distribution of the composite colors.)
3) Solid white;
4) Solid red, fawn, or yellow;
5) Piebald;
6) Inferior specimens of all the foregoing. (Note: a perfect piebald is preferable to a muddy brindle or a defective solid color. Solid black and black and tan are very undesirable, but black is not so objectionable if occurring, to a moderate degree, in piebald patches.)
Note: A small white patch on the chest is acceptable in brindles and solid-colored dogs. Color patches on piebalds are expected to be well-defined, of pure color, and symmetrically distributed.

Movement and carriage are distinctive to the breed. There is a characteristic roll to the gait, which allows effortless movement without the pounding of the front assembly on the floor, or having the rear assembly so turned in or out as to cause cow-hocked or spread-hocked rear movement. Movement is somewhat constrained, moving with short, quick steps on the tips of the toes. The rear feet appear to skim the ground; they should not be lifted high. They always appear sound and efficient while in motion.

(A dog with an Eliminating Fault is not to be considered for placement in a conformation event, nor are they to be reported to UKC.)
Teeth or tongue showing when the mouth is closed.
Pinched nostrils.
Over-nose wrinkle, even if broken, that covers any part of the nose. 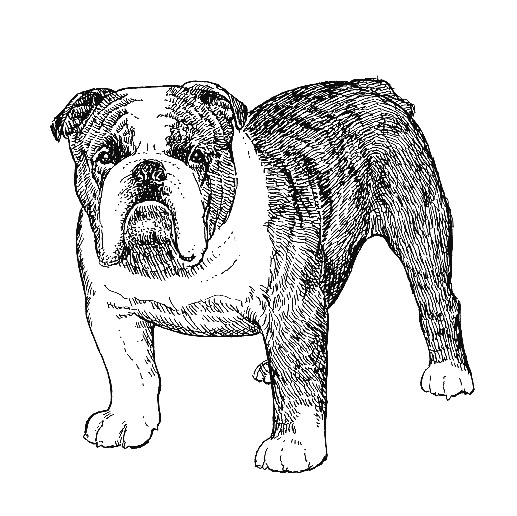