The Yorkshire Terrier, with his long flowing coat and graceful gait, is probably the most glamorous of the smaller (Toy-type) terrier breeds. In the 19th century, however, he weighed about fifteen pounds and had been originally developed to perform the less-than-glamorous but necessary job of controlling the rats in the coal mines and cotton mills of Yorkshire, England.

The exact development of the Yorkshire Terrier is obscure but most of the various breeds that went into its make-up are known. One, the so-called “Broken-Haired Scotch Terrier,” was brought to Yorkshire by Scottish weavers who had migrated from Scotland in the mid-19th century. Another was a small, 6- to 20-pound (usually averaging about ten pounds), longish-coated and bluish-gray in color dog called the Waterside Terrier, which was common in Yorkshire and was bred for hunting and killing rats. This Waterside Terrier was crossed with the Old English Black and Tan Terrier, the rough-coated English Terrier, the Paisley Terrier and the Clydesdale Terrier to produce the current day Yorkshire Terrier. Additional influences probably included the Maltese and the Skye Terrier. Because of the great improvement in the dog that had been done in Yorkshire, around 1870 it was decided that the breed should be called the Yorkshire Terrier rather than Scottish Terrier. In 1886, it was officially given the breed name of “Yorkshire Terrier.” By the late 1870s, sizes averaged from three to seven pounds, where they remain today.

The Yorkshire Terrier was recognized by the United Kennel Club in 1956.

The Yorkshire Terrier’s appearance is that of a well-balanced, long coated, small (Toy-type) terrier, readily identified by its steel blue and tan, straight-flowing coat. The hair is parted on the muzzle and from the base of the skull to the end of the tail. The body is square and evenly proportioned. The dog’s high head carriage and confident manner gives the appearance of vigor and self-importance.

Although small, the Yorkshire Terrier is spirited, reflecting its terrier strains, and very healthy and strong. Yorkshire Terriers are very intelligent and lovable and make excellent companions.

The skull is rather small and flat.

The muzzle is in proportion to the skull, while also being broad and deep enough to support healthy dentition.

A full complement of strong white teeth meet in a level or scissors bite.

The eyes are medium in size and placed to look directly forward. They are dark in color and sparkle with a sharp, intelligent expression. The eye rims are dark.

The ears are small and V-shaped and carried erect. They are set high on the head, with the hair trimmed short on the tips.

The neck is of good length and is set to allow for high head carriage.

The forelegs are straight. Dewclaws may be removed.

The body is compact, with a level topline and moderate spring of rib.

The hindquarters are sturdy and well muscled.

Straight when viewed from behind, with moderate angulation at the stifle. Removal of rear dewclaws is preferred but not mandatory.

The feet are round with black toenails.

The tail is customarily docked to a medium length. The tail set is level with the topline, with the tail carried slightly higher than the level of the back. If undocked, the tail is as straight as possible, well covered with hair, and carried a little above the level of the topline. The coat at the base of the tail is a lighter blue than on the rest of the body, and the color darkens towards the tip on both docked and undocked tails.

All tan hairs are darker at the roots than in the middle, shading to a still lighter tan at the tips.

On the body, the dark steel blue extends over the body, from the back of the head to the root of the tail. The headfall is a rich golden tan, deeper in color at the sides of the head, at the ear roots and on the muzzle, with the ears being a deep rich tan. The tan color should not extend down the back of the neck.

The hair on the chest and legs is, a bright, rich tan, not extending above the elbow on the forelegs or above the stifle on the hind legs.

Faults: In adult dogs, fawn or bronze hairs mingling with silver-blue color. Sooty or black hair intermingled with the tan.
Disqualifications: Any solid color, or any combination of colors (such as, but not limited to, chocolate and tan or tri-color) other than those specifically described. Any white marking other than a small spot on the chest, no more than one inch in diameter. Any change in coat color by artificial means. Albinism.

The Yorkshire Terrier weighs no more than seven pounds.

The dogs exhibit a smooth and flowing movement, in straight line, with good reach and strong drive and straight action front and rear. The topline remains level while gaiting.

(A dog with a Disqualification must not be considered for placement in a conformation event, and must be reported to UKC.)
Unilateral or bilateral cryptorchid.
Viciousness or extreme shyness.
Albinism.
Any solid color, or any combination of colors (such as, but not limited to, chocolate and tan or tri-color) other than those specifically described.
Any white marking other than a small spot on the chest, no more than one inch in diameter.
Any change in coat color by artificial means. 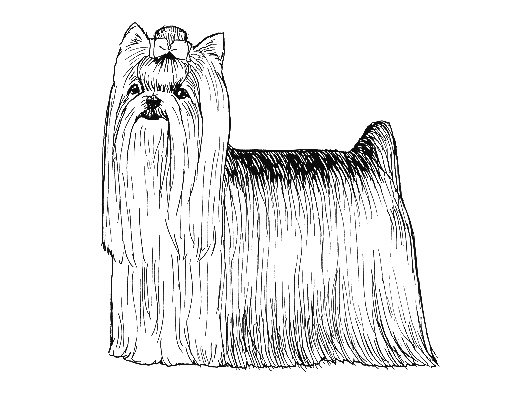