This highly regarded sporting dog was perfected in Germany by a Dutchman, Edward Korthals, between 1865 and 1885. It was first known as the Korthals Griffon for this reason.

The Wirehaired Pointing Griffon was recognized by the United Kennel Club in 1936.

Everything about the Wirehaired Pointing Griffon indicates strength and vigor. He is a medium-sized dog, somewhat longer than tall in proportion. He has a very intelligent air. His characteristic outer coat is harsh like the bristles of a wild boar. His unkempt appearance is due to his thick, soft undercoat.

This breed has a biddable, affectionate nature, which makes it suitable as a family pet and guardian as well as its original purpose of a versatile hunting dog.

The long head is furnished with a harsh coat, forming a mustache and eyebrows which surmount, but do not cover, the eyes.

Long and not too wide. Stop is moderate.

Long and square, the same length as the skull. Toplines of skull and muzzle lie in parallel planes.

Large and somewhat rounded. Dark yellow or brown in color, with an intelligent expression.

The nose is always brown.

Medium size, flat, set on a line from the corner of the eye and well covered with both long and short hair.

The neck is moderately long and free of dewlap.

The shoulders are long and sloping.

The very straight, muscular forelegs are well-furnished with thick hair. Dewclaws may be removed.

Chest is rather deep, but not too wide. Ribs are moderately sprung. Back is straight and strong, and the topline slopes very gently from withers to tail. Loin and croup are strong and not too short.

Well muscled with angulation that balances with the forequarter.

Round and tight, with well arched toes.

The tail is generally docked by a third. It is carried horizontally or with the tip slightly raised, and is furnished with a hard coat, but is without plume.
Coat

Double. The outer coat is hard, dry and stiff. The undercoat is thick and downy.

(An Eliminating Fault is a Fault serious enough that it eliminates the dog from obtaining any awards in a conformation event.)
Curly or wooly outer coat.

(A dog with a Disqualification must not be considered for placement in a conformation event, and must be reported to UKC.)
Unilateral or bilateral cryptorchid.
Viciousness or extreme shyness.
Black coat or nose color.
Albinism. 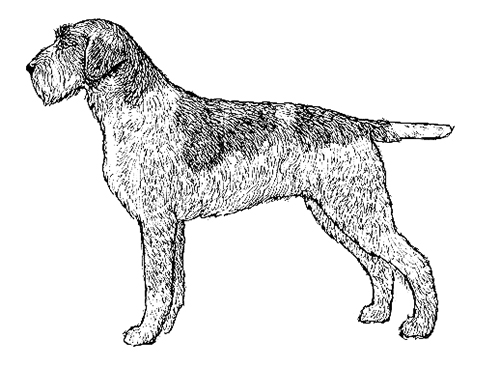