When fox hunting became popular in England in the late 17th century, hunters found the need for a dog that could go to ground and bolt the quarry. Terriers, game and eager, were ideal for such a purpose but most of the early terriers were dark in color and too low on leg to run with a pack of foxhounds. Hunters began to develop a longer-legged terrier, predominantly white in color so as not to be mistaken for a fox. Early fox terriers were primarily smooth-coated, but the wire coat persisted. By the end of the 19th century, smooth and wire-coated Fox Terriers were in great demand, both as companions and show dogs. Although considered one breed for many years, interbreeding of Smooth Fox Terriers and Wire Fox Terriers ceased in the early 1900s. Except for coat, however, the two breeds are essentially identical.

The Fox Terrier was recognized by United Kennel Club in 1912. The two breeds were separated effective January 1, 1999.

The Wire Fox Terrier is a muscular but agile, active, small-to-medium size hunting terrier, with sufficient length of leg to run with the foxhounds in a hunt, and built to go to ground after fox. The body is square and covered with a dense, wire coat. The head is moderately narrow, with a flat skull, a barely perceptible stop, and a powerful muzzle that is equal in length to the skull. Ears are set high and are V-shaped, dropping forward, and carried close to the skull. The tail is straight, set high, and normally docked, but not close to the body. The coat is predominantly white in color. The Wire Fox Terrier is modeled on the symmetry and power of the Fox Hound. When standing, the distance between the front and rear feet is long in comparison to the relative shortness of the dog’s back.

The head is long and moderately narrow. When viewed from the side, the skull and muzzle are equal in length, parallel to one another, and joined by a barely perceptible stop.

The skull is flat and moderately narrow, tapering slightly toward the muzzle. Cheeks are flat and clean.

The muzzle is strong and tapers slightly from stop to nose. Jaws are strong and muscular. There is a minimum of falling away under the eye, giving a moderately chiseled look. Lips are tight and darkly pigmented.

The Wire Fox Terrier has a complete set of comparatively large, evenly spaced, white teeth with a scissors bite.

The Wire Fox Terrier has small, V-shaped, button ears of moderate thickness. The ears are set high and the tips are carried close to the cheek. The topline of the folded ear is well above the level of the skull.

The neck is clean, muscular, dry, and of moderate length. The neck gradually widens from the nape and blends smoothly into the shoulders.

Shoulders are long, sloping, well laid back, fine at the point of shoulder, and well defined at the withers. The upper arm is shorter than the shoulder blade. The angle formed by the scapula and upper arm is approximately 90 degrees.

Faults: Bowed legs; bent pasterns; knuckling over or any other misalignment of joints; out at elbow; toeing in or toeing out.

The Wire Fox Terrier body is square, measured from point of shoulder to point of buttocks and from withers to the ground. The back is short and level, blending into a short, muscular, slightly arched loin. The chest is deep but not broad. The ribs extend well back, with the front ribs moderately arched and the back ribs well sprung and deep. The brisket extends to the elbow. The forechest is well filled but does not extend beyond the point of shoulder. The croup is nearly flat.

Faults: Barrel ribs; chest too deep or too broad.

The hindquarters are strong and muscular. The thighs are long and powerful, stifles are well bent, and the hocks are well let down. When the dog is standing, the short, strong rear pasterns are perpendicular to the ground and, viewed from the rear, parallel to one another.

Feet are round, compact, and not too large. Toes are moderately arched. Pads are hard, tough, and well-cushioned. Dewclaws may be removed.

The tail is set on high and customarily docked to a length that is proportionate to the body and provides a good handhold. The tail is straight and carried erect, but never curled or laying over the back.

The Wire Fox Terrier is a double-coated dog with a hard, wiry outer coat and a soft, dense undercoat. The outer coat may be slightly waved but a curly coat is very objectionable. The coat is trimmed by stripping and blended into the leg and face furnishings to give a distinct Wire Fox Terrier outline. The longer coat on the muzzle, legs and lower body should be dense and crisp in texture.

The dog should be presented with sufficient length of coat so that the texture and density may be determined. The Wire Fox Terrier coat must be sufficiently well-groomed to enable a judge to properly evaluate the dog, but the artfulness of the trimming is not a factor to consider in judging this breed unless all other aspects of the dogs being judged are equal.

White is the predominant color.

Desirable height for a mature male Wire Fox Terrier should not exceed 15½ inches at the withers. A balanced dog of that height should have a back length from withers to root of tail of no more than 12 inches, and a head length of nor more than 7¼ inches or less than 7 inches. A balanced dog of these proportions should weigh about 18 pounds. Bitches are normally slightly lower in height and lighter in weight, but with the same proportions.

A Wire Fox Terrier moves with a brisk stride of moderate length. Coming and going, the forelegs and hind legs swing parallel to one another and perpendicular to the ground, like the pendulum of a clock. When moved on a loose lead at a moderate speed, the hocks and elbows are the same distance apart as the feet. Viewed from the side, the front legs extend well forward, but with very little height between foot and ground. The rear leg swinging forward contacts the ground at approximately mid-length of the body. As the leg moves beyond the rump, the foot is quickly lifted, creating a distinctive “snatch” of the hock. When moving, the back remains level.

(A dog with a Disqualification must not be considered for placement in a conformation event, and must be reported to UKC.)
Unilateral or bilateral cryptorchid.
Viciousness or extreme shyness.
¼ inch or more overshot or undershot.
Dudley nose.
Butterfly nose.
Prick, tulip, or rose ears.
Albinism. 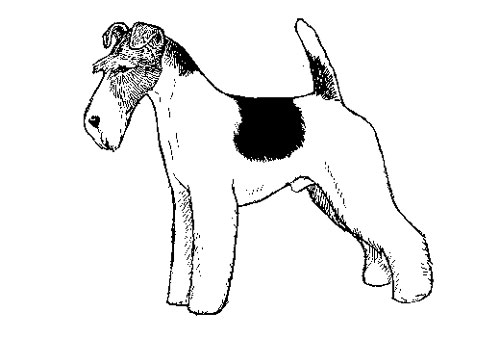