The White Shepherd is a direct descendant of the German Shepherd Dog. In the first half of the twentieth century, German cavalry officer Max von Stephanitz, created the German Shepherd Dog using a variety of German sheepdogs as his foundation stock. Initially, color was not considered as long as the dog demonstrated working ability. During the late 30s, however, the white color fell into disfavor.

There were, however, always breeders who appreciated the beauty of the white dogs and who continued to breed them. Because of their exclusion from most German Shepherd Dog breeding programs, the whites rather quickly evolved into a distinct type, and eventually into a separate breed.

The White Shepherd was recognized by the United Kennel Club on April 14, 1999.

The White Shepherd is a medium-sized, well-balanced, muscular dog, slightly longer than tall, with a medium length, pure white coat, erect ears, and a low-set natural tail that normally reaches to the hock and is carried in a slight curve like a saber. The outline of the White Shepherd is made up of smooth curves rather than angles. Gender differences are readily apparent.

The White Shepherd should be evaluated as an all-around working dog, and exaggerations or faults should be penalized in proportion to how much they deviate from breed type; and how much they interfere with the dogs ability to work. Working dogs are not to be penalized under any conditions for scars or blemishes that are due to occupational injuries.

With strangers, he is observant and may be somewhat aloof but not apprehensive. Timidity in a mature dog or aggressive behavior is not typical of this breed and should be severely penalized.

The head is proportional to the size of the dog. Males appear masculine without coarseness, and females feminine without being overly fine. The skull and muzzle are of equal length, parallel to one another, and joined at a moderate stop. There is little or no median furrow.

Fault: Round or domed skull.

The muzzle is strong and dry with well-developed jaws. Viewed from above, the muzzle is wider at the stop than at the tip. Lips are tight and darkly pigmented.

The White Shepherd has a complete set (20 upper and 22 lower) of evenly spaced, white teeth meeting in a scissors bite. Broken teeth shall not be penalized.

The nose is always black. A snow nose is acceptable but not preferred.

The eyes are brown, of medium size, almond-shaped and set slightly obliquely. Darker colored eyes are preferred. Eye rims are dark. Expression is keen and intelligent, yet composed.

Ears are erect, moderately pointed, of medium size, broad at the base, and set high. Ear leather is firm. When the dog is alert, the center lines of the ears, viewed from the front, are perpendicular to the ground and parallel to each other.

Length is proportional to the size of the head. The neck is strong, muscular, and dry. Except when at attention or excited, the typical carriage of the head is forward rather than up, particularly when the dog is in motion.

The shoulder blades are long, well laid back (about 35 degrees from the vertical), and laid flat to the body with the upper tips fairly close together. Shoulders and upper arms are well muscled but never loaded. The upper arm appears to be equal in length to the shoulder blade and joins it at an angle of about 102 degrees. Elbows are close to the body. From the pasterns to the elbows, the forelegs are straight and strong with oval-shaped bones that are substantial, but not excessive. A straight line drawn from the withers to the ground should pass through the point of the elbow. Pasterns are strong, sloping at no more than 25 degrees. The length of the forelegs is equal to or just slightly greater than half the height of the dog, measured at the withers.

The White Shepherd is solid without bulkiness and should be shown in lean, hard physical condition. A properly proportioned White Shepherd is longer (measured from prosternum to point of buttocks) than tall (measured from the withers to the ground) in a ratio of 10 to 8. The length is derived from proper construction of forequarters and hindquarters and not from length of back. The withers are higher than and slightly sloping into the short, straight, strongly developed back. Loin is broad, strong, and relatively short. Croup is long and gradually sloping at an angle of approximately 23 degrees from the horizontal, flowing smoothly into a low set tail. The forechest is well filled and the prosternum is prominent. The chest is deep with the brisket reaching to the elbows. The distance from the withers to the lowest point of the chest equals approximately 48-50 percent of the dogs height. Ribs are long, well sprung, and are carried well back. The abdomen is firmly held and never paunchy. Tuck-up in flank is moderate.

Faults: Dip behind the withers; sag or roach in topline; shelly chest; ribs too wide or round so as to interfere with action of elbows and forelegs; flat ribs; extreme greyhound-like tuck-up; croup too steep or too flat.

The hindquarters are broad and muscular and in balance with the forequarters. The pelvis lies tilted backward at an approximate angle of 35 degrees from the horizontal. The femur drops almost vertically from the hip socket, forming an approximate 125-degree angle with the pelvis. The upper and lower thighs are roughly the same length. The stifles are well bent and the rear pasterns are short, clean, and perpendicular to the ground. When standing or moving, there must be no tendency for the hocks to turn in or out. Viewed from the rear, the hind legs drop straight and parallel to each other and the feet point straight ahead.

Feet are round and compact, with toes well arched. Pads are thick, hard, and darkly pigmented. Nails are strong. Front dewclaws may be removed but are normally left intact. Removal of rear dewclaws is preferred but not mandatory.

The tail is set on low in a natural extension of the sloping croup. The tail extends at least to the hock joint and usually below. When the dog is relaxed, the tail hangs in a slight curve, like a saber. When the dog is excited or moving, the tail may be raised and the curve accentuated. The ideal tail carriage is at or slightly below a vertical line extending from its base. A slightly higher tail carriage is acceptable but not preferred. The coat on the tail stands outward, giving the tail a bushy appearance.

Dogs with docked or altered tails resulting from working injuries are not to be penalized.
Serious Faults: Tail too short; ankylosis.

The White Shepherd has a weather-resistant double coat. The outer coat is dense, straight, harsh, and close lying. The undercoat is short, thick, and fine in texture. At the neck, the coat may be slightly longer and heavier, particularly in males. The hair on the back of the legs is slightly longer than on the front. The coat on the rump and underside of the tail is longer and thicker than the body coat. The head and ears are covered with a smooth, somewhat softer hair while the hair covering the legs and paws has a harsher texture.

Ideal coat color is a pure white. Colors ranging from a very light cream to a light biscuit tan are acceptable but not preferred. Skin color is pink to gray, with gray preferred. Nose, lips, eye rims, and pads are fully pigmented and black in color. In judging the White Shepherd, temperament, overall quality and movement are considered more important than coat color alone.

Faults: Faded or spotty pigmentation.
Disqualifications: Any color other than those listed above; albinism.

Ideal height and weight at maturity is 25 inches, and 75-85 pounds for males; and 23 inches and about 60-70 pounds for females. Acceptable range of height is one inch of height in either direction of the ideal.

Serious Fault: More than 2 inches of height in either direction of the ideal.

It is essential that a White Shepherd be sound and capable of quick, sudden movement. When trotting, the White Shepherd moves with a long, efficient stride that is driven by a powerful forward thrust from the hindquarters. The rear leg, moving forward, swings under the foreleg and touches down in the place where the forefoot left an imprint. As the rear leg moves backward, the body is propelled forward. The front and rear feet remain close to the ground throughout. When trotting, the back remains firm and level. As the speed of the trot increases, there is a tendency to single track. Correct movement must be evaluated from front and rear as well as the side.

Serious Faults: Correct movement is essential to this breed so structural faults shall be penalized in proportion to how they diminish the dogs ability to move with efficiency and agility.

(A dog with a Disqualification must not be considered for placement in a conformation event, and must be reported to UKC.)
Unilateral or bilateral cryptorchid.
Viciousness or extreme shyness.
Albinism.
Undershot.
Wry mouth.
Blue or pink eyes.
Cropped ears.
Drop or tipped ears.
Total lack of pigment on the nose, eye rims, lips, or pads.
Any color other than those listed above. 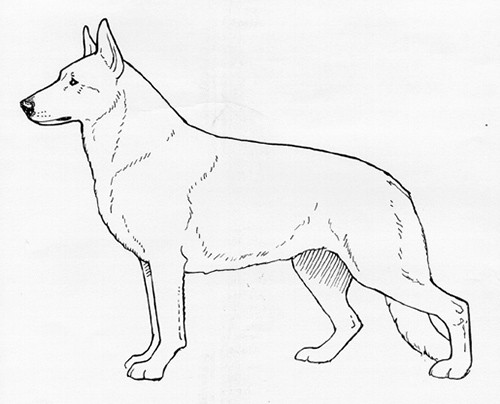 For more information on this breed, please visit the United White Shepherd Club