Developed in Great Britain as the "poor man's race horse,” the Whippet is believed to include such breeds as the early working Terriers, the Greyhound and the Italian Greyhound. Regardless of origin, the breed was used by the working class for sprint racing, a sport that was imported to the United States.

The Whippet was recognized by the United Kennel Club in 1935.

The Whippet is a sighthound of medium size that gives an overall balanced impression of elegance, muscular power and grace of outline. The breed is built for speed and work.

Serious Fault: Any form of exaggeration that would be detrimental to speed and work.

The Whippet is amiable, friendly, gentle and extremely adaptable at home or in the field. He makes an ideal companion.

The long, lean skull is flat on top and fairly broad, tapering in width from ear to eye. The stop is scarcely perceptible.

The muzzle is long and powerful, but not coarse. There is a strong underjaw.

The large, dark eyes must be of the same color. Fully pigmented eyelids are desirable. The expression is alert and intelligent.

The nose is entirely black.

The rose ears are characteristic of the breed. They are small and fine in texture. In repose, they are thrown back and folded along the neck.

The long, clean, muscular neck is well arched, with no suggestion of throatiness. It widens gracefully into the top of the shoulders.

The straight forelegs give the appearance of strength and substance of bone. The points of the elbows point straight back, and are neither in nor out. The strong, flexible pasterns are slightly bent. Dewclaws may be removed.

The length, measured from the forechest to the buttocks, is equal to or slightly greater than the height, measured at the highest point of the withers. The broad, firm back is well muscled. The chest is very deep, with plenty of heart room. The space between the forelegs is filled in so there is no appearance of a hollow between them. The ribs are well sprung. The topline runs smoothly from the withers. A graceful, natural, but not too accentuated, arch begins over the loin and carries through over the croup. It is continuous without flatness. There is a definite tuck-up.

Faults: A dip behind the shoulder blades. Wheelback. Flat back. Steep or flat croup.

The hindquarters are long and strong, giving the dog the impression of standing over a lot of ground.

The thighs are broad and muscular. The stifles are well bent. The long, flat muscles carry well down toward the hock. The hocks are well let down and close to the ground. Dewclaws may be removed.

The well-formed feet have hard, thick pads. Both hare and cat feet are acceptable, but the former are preferred. The long, close toes are well arched. The strong nails are naturally short or of moderate length.

The long, tapering tail reaches to the hip bone when drawn through between the hind legs. When the dog is in motion, the tail is carried low, with only a gentle, upward curve. The tail is not carried higher than the top of the back.

The short, close, smooth coat is firm in texture. Scars and injuries, which may be the result of work or accident, are not to be penalized.

Disqualification: Any coat other than described above.

The height range, measured at the highest point of the withers is as follows: dogs, 19 to 22 inches; bitches, 18 to 21 inches.

Movement is low, free moving and smooth. There is reach in the forequarters; the forelegs move forward close to the ground, providing a long, low reach. There is a strong drive in the hindquarters, with the hind legs having strong propelling power. When viewed from the side, there is a great freedom of action, and the topline is maintained. When viewed from the front or rear while gaiting, the legs turn neither in nor out, nor do the feet cross over or interfere with each other.

(An Eliminating Fault is a Fault serious enough that it eliminates the dog from obtaining any awards in a conformation event.)
More than one-half inch above or below the stated size limits.

(A dog with a Disqualification must not be considered for placement in a conformation event, and must be reported to UKC.)
Unilateral or bilateral cryptorchid.
Viciousness or extreme shyness.
Blue or wall eyes.
Undershot bite.
Overshot bite one-quarter inch or more.
Any coat other than described. 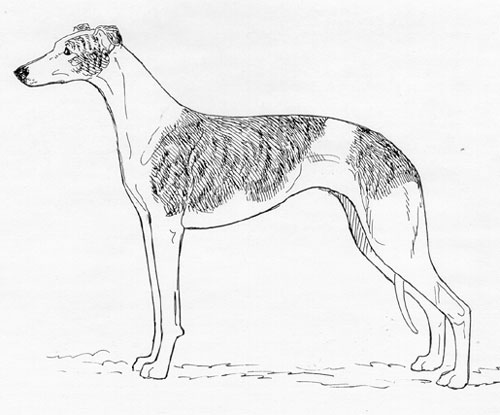