The Westphalian Dachsbracke is a small scenthound that originated in Germany.

The Westphalian Dachsbracke was recognized by the United Kennel Club in 2006.

The Westphalian Dachsbracke is the short-legged variety of the German Hound. It is moderately long, and sturdily built.

The head is long and narrow.

The occiput protrudes only slightly. The stop is minimal.

The muzzle is long, with a slightly arched bridge. The lips are moderately overlapping.

The Westphalian Dachsbracke has a complete set of evenly spaced, white teeth meeting in a level or scissors bite.

The nose has fairly dark pigment, but there is a lighter, almost flesh colored strip in the center.

The eyes are dark and clear, with a friendly expression.

Moderately long and fairly thick, with some loose skin but no dewlap.

The legs are straight, with close fitting elbows.

The chest is not as developed as in the Dachshund. It is strongly supported by the forelegs, and should not be let down too much between them. The ribcage is long. The back is slightly arched and has a slight dip behind the shoulders. The loin is broad and strongly developed. The croup is sloping. There is a slight tuck up.

The hindquarters are straighter than in most other breeds.

The hind legs are strongly developed, and have pronounced muscles.

The feet are sturdy, with tight, short toes.

The tail is set on relatively high, and is very thick at the root. It is carried in saber fashion, and has a bristly brush on the underside.

The entire body is covered with a dense, coarse coat. It is short on the head, ears and lower legs, longer on the back, neck and underside of the tail. 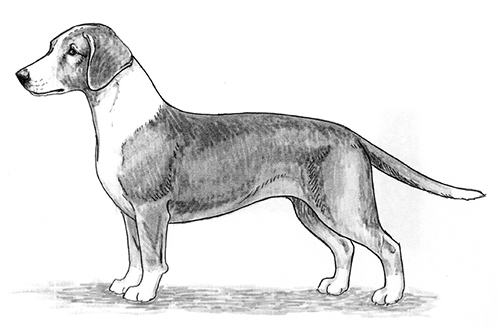