The West Siberian Laika originally comes from the North Ural and West Siberia. The current breed was developed from two different types. The breed is lighter in build and narrower in head than the East Siberian Laika. It is an all around hunting dog, used on birds and small game and also occasionally on large game.

The West Siberian Laika was recognized by the United Kennel Club on January 1, 1996.

A medium sized, strong, well built northern breed, with a general wolf-like appearance. The breed is never coarse or massive. Due to the arctic conditions in the country of origin, the coat is very important. It must be double, dense, very hard and not too long.

Intelligent, willing to learn and easily trainable. Affectionate and loyal to his family, and friendly to strangers. The breed has a strongly developed hunting instinct and a keen sense of direction. When he finds game, he alerts the hunter by barking.

The West Siberian Laika has a complete set of evenly spaced, white teeth meeting in a scissors bite.

Oval, slanting and dark in color.

Prick, set on high and pointed.

Legs are long and muscular with short, flexible pasterns.

The chest is well developed, and the withers are very pronounced. The back is strong and straight, and the loin is short and supple. The croup is broad, muscular and slightly sloping. There is a slight tuck-up.

Muscular and strong, with good angulation.

Strongly curled and carried over the back or buttocks.

Double, with a hard, straight outer coat and a well developed undercoat. Due to the abundance of undercoat, the outer coat stands off the body slightly. On the head, ears and front of the legs, the hair is short. On the withers, neck, shoulders and back of the legs, it is longer. It forms a beard on the cheekbones, a collar on the neck, and slight breeches on the back of the thighs.

Typical movement is a short trot. 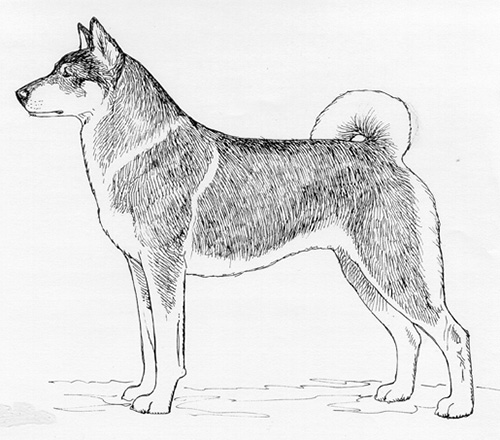