The early vermin-catching dogs indigenous to Scotland, collectively known as the “Terriers of Scotland,” developed from common root stock and eventually separated into defined breeds. These include the Dandie Dinmont, Scottish, Skye and Cairn Terriers. This, too, is the origin of the West Highland White Terrier, which is thought to have originally been part of the Cairn breed.

The West Highland White Terrier was recognized by the United Kennel Club in 1919.

The West Highland White is alert, gay, courageous and self-reliant while remaining friendly. Its expression is piercing, inquisitive and alert.

The Westie head is thickly coated with hair and is carried upright, never extended forward. The distance from occiput to stop is slightly greater than the distance from the stop to the end of the nose. There is a distinct stop, created by a prominent brow, and a slight furrow between the eyes.

Broad, domed and free of wrinkle. Slightly wider between the ears than at the eyes.

Broad and strong enough to produce a varminty expression, the muzzle is well filled below the eyes and tapers in width towards the nose. The nasal bone is straight, never dished or down faced.

A full complement of large (for the size of the breed), strong, white teeth meet in a close scissors bite, with the upper incisors slightly overlapping the lower incisors.

Medium in size and set wide apart under well-developed brows. Dark in color, with a sharp, intelligent, piercing expression.

Faults: Eyes too full or round. Light-colored eyes.

The small ears terminate in a sharp point, but must never be cropped. They are carried tightly erect and are set wide apart on the top outer edge of the skull. The hair on the ears is short, smooth and velvety, and is free of fringe at the tips.

A muscular neck gradually thickens toward its base and is well set on sloping shoulders. The length is in proportion to the whole of the dog.

Faults: Neck too long or too short.

The sloping shoulder blades are broad and and set smoothly into the body. They join a moderately long upper arm that angles enough to set the legs back under the body.

Faults: Too short or too straight upper arm. Out at the elbows. Fiddle front. Light bone.

The body is compact and of good substance. Whether standing or moving, the topline is flat and level. The very deep chest extends to the elbows, with the breadth being in proportion to the size of the dog. The deep ribs are well arched in the upper half, extending at least to the elbows and presenting a flattish side appearance. The back ribs are of considerable depth. The distance from the last rib to the hindquarters is as short as is compatible to allow free movement of the body. The back is straight. The short, broad loins are strong.

Faults: High rear. Weak back. Back too long or too short. Barrel ribs. Ribs too short, above the elbows.

The hindquarters are well-angulated, strong and very muscular, broad at the top when viewed from behind.

Relatively short, with muscular thighs. Legs are not wide apart at thigh or hock. Well bent at hock.

Round and thickly padded, with the front feet somewhat larger than the hind feet. Pads and nails preferably black.

The tail is relatively short, five to six inches in length, but is never docked. When standing erect, the tip is approximately level with the top of the skull, thus maintaining a balanced appearance. It is covered with hard, straight hair, but no feathers. The tail is carried gaily, but not curled over the back. It is set on high enough so that the spine does not slope down to it.

Faults: Tail set too low. Tail too long. Thin. Carried at half-mast or over the back.

The ideal coat is an integral detail of the breed. A double coat is a necessity. The outer coat consists of straight, hard, white hair about two inches long and free from any curl. The abundant undercoat is short, soft and close, resembling fur in texture. The outer coat is shorter on the neck and shoulders blending into the longer furnishings on the stomach and legs. The furnishings may be somewhat softer and longer, but must never appear fluffy.

The head may be shaped (by plucking) to present a round appearance and act as a frame for the typical Westie expression, but it is not a necessity. The legs are covered with short, hard hair. The hair on the ears is short, smooth and velvety, and is free of fringe at the tips.

As defined by the name of the breed, the only acceptable color is white.

The ideal height is approximately 11 inches, with some slight deviation acceptable.

The preferred gait is free, straight and easy all around, powerful, with reach and drive. The forelegs are freely extended forward by the shoulder. The hind legs move fairly close. The hocks are freely flexed and drawn close under the body so that when moving off the foot, the body is propelled forward with some force. 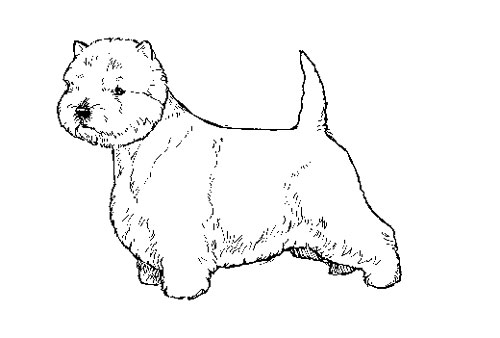