Opinions differ on the length of time that the Welsh Springer Spaniel has been designated as a pure breed. Some theories trace the breed back to the Celts and their settling of Wales and other parts of the British Isles. Others state the breed is a mixture of the British Spaniel breeds and did not become standardized until the late 1800s, at approximately the same time the other Spaniel breeds were being categorized in Great Britain.

The Welsh Springer Spaniel was recognized by the United Kennel Club in 1956.

The Welsh Springer Spaniel is an appealing and manageable size. Its structure indicates that it is built for hard work and endurance, exhibiting substance while never appearing coarse. It is compact and not leggy, indicating endurance and the ability to work hard.

The Welsh Springer Spaniel is a distinct variety from other spaniels. Its name is derived from its hunting style. Its coat is thick enough to protect it from adverse hunting conditions, but never excessive enough to hinder his work.

The breed is active, with a loyal and affectionate temperament, making it an ideal part of the family as well as an excellent hunting companion. They may be reserved with strangers, but never to the point of being excessively shy or vicious.

The Welsh Springer Spaniel head is unique among spaniels. Overall balance is of primary importance. It is in proportion to the body.

The slightly-domed, medium-length skull has a clearly defined stop. It is well chiseled below the eyes. The top plane of the skull is slightly divergent from the plane of the muzzle, but the muzzle does not appear down faced.

The straight, fairly square muzzle is approximately equal in length to, but never longer than, the length of the skull. It is free from excessive flews.

The medium-sized, oval-shaped eyes have a soft expression. They are dark to medium brown in color, the preference being for a darker eye. Dark pigmentation is preferred on the tight eye rims.

The well-developed nostrils may be black or any shade of brown.

The lightly-feathered ears are set on at about eye level and hang close to the cheek. They are comparatively small, not reaching to the nose. Shaped somewhat like a vine leaf, they narrow gradually toward the tip.

The upper arm is placed so that it joins the shoulder blade at a sufficient angle to place the elbow close to the body and directly below the highest point of the shoulder blade. The straight, medium-length forearms are feathered. The well-boned legs never appear coarse. The short pasterns slope slightly.

The well-developed, muscular chest has a prominent forechest. The brisket reaches to the elbows. The ribs are well-sprung. The topline is level. The slightly arched, muscular loin is close coupled. The croup is very slightly rounded.

The round, tight, well-arched feet have thick pads.

The tail is an extension of the topline, the carriage being nearly horizontal or slightly elevated when the dog is excited, with a lively action. It is generally docked, but a natural tail is not a fault.

The naturally straight, flat coat is soft to the touch but dense enough to be waterproof, thorn proof and weatherproof. There is moderate feathering on the back of the forelegs, above the hocks, and on the chest and underside of the body. There is light feathering on the ears and tail. Excessive coat, which would be a hindrance in the field, is discouraged. Sculpting and obvious scissoring are not allowed. Show ring presentation should always be natural and unaltered.

The only acceptable colors are rich red and white. Any color pattern is permitted. Red ticking in any of the white areas is acceptable.

Ideal heights, measured at the withers, are: dogs, 18 to 19 inches; bitches, 17 to 18 inches. Individuals are to be penalized in proportion to the degree of deviation from the ideal heights.

Weight is in proportion to the height and overall balance of the individual.

Characteristic gait is a smooth, powerful, ground-covering action, with a noticeable drive from the rear. A strong forward stride, with an energy-conserving reach is evident when viewed from the side. From the front, the legs appear to move forward effortlessly, with no tendency to cross over or interfere. From the rear, the hocks follow on a line with the forelegs, being neither too wide nor close. As speed increases, the dog single tracks. 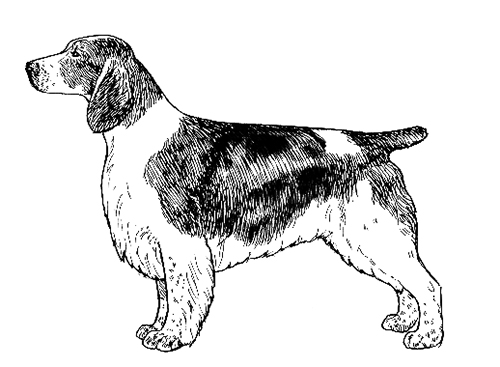