The Weimaraner originated in the early 19th century in Germany, where it was conscientiously developed and bred to maintain its physical and mental characteristics, and jealously guarded. The ideal dog was one that possessed courage, speed, intelligence and a well-developed scenting ability. The breed was originally used for big game, but was later adapted to use as a bird dog; and was found to be a good pointer and retriever.

The Weimaraner was recognized by the United Kennel Club in 1955.

The Weimaraner is a medium-sized gray dog with fine, aristocratic features. The breed presents an overall picture of grace, speed, stamina, alertness and balance. In proportion, he is just slightly longer than tall. The dog's conformation, structure and musculature must always indicate the ability to work with great speed and endurance.

The breed has a friendly, fearless, alert and obedient temperament.

The moderately long, aristocratic head has a slight median line extending back over the forehead. The stop is moderate.

Broader in males than in females, but always in proportion to the overall length of the head. The occiput is rather prominent. The trumpets (temples) are well set back; beginning behind the eye sockets.

Measured from nose to stop, the muzzle is slightly longer than the skull. It is strong and powerful, especially in the male. The flews are straight; delicate at the nostrils. The skin is drawn tightly. Pigment on the lips and gums is in pinkish flesh shades.

A full complement of well set, strong, even, white teeth meet in a scissors bite.

Acceptable eye colors include shades of light amber, gray or blue-gray. They may appear almost black when dilated under excitement. The eyes are set well enough apart to indicate intelligence and a good disposition. Expression is kind, keen and intelligent.

Very Serious Fault: Any eye color other than those indicated as acceptable.
Eliminating Faults: Entropionism or ectropionism.

The nose is gray.

The long, lobular, slightly folded ears are set high. When drawn snugly alongside the jaw, the ear ends approximately 2 inches from the point of the nose.

The moderately long neck is clean, arched and carried in a manner that gives the dog a noble appearance.

Shoulder blades and upper arms are long, sloping and well angulated. The withers are well defined.

Serious Faults: Elbows in or out.

The deep chest is well-developed, with the brisket extending to the elbow. Forechest is well developed. In profile, excessive tissue does not protrude from the forechest to the point of exaggeration.

The moderately long topline is straight and strong, sloping slightly from the withers. Ribs are long and well sprung but not barrel shaped. Tuck up is moderate.

Serious Faults: Back too long or too short. Roached or sway back.

Long and sinewy with well defined muscles and clearly visible tendons. Well angulated at the stifle. Removal of rear dewclaws is customary but not mandatory.

The webbed feet are firm and compact. The toes are well arched. The pads are closed and thick. The short nails are gray or amber in color.

Docked tail: At maturity, the docked tail measures approximately 6 inches. It has a tendency to be light rather than heavy. It is carried in a manner expressing confidence and sound temperament.
Natural tail: Strong and well coated, set-on slightly lower than with other similar breeds. Good plume on long-haired dogs. At rest the tail hangs down. When working or alert the tail is carried level or higher.

The coat is short, very dense, smooth and sleek. With or without a very sparse undercoat.

Soft, long topcoat, with or without undercoat. May be smooth or slightly wavy. The hair is long and flowing at the ear set-on. Velvety hair is permissible on the tips of the ears. Coat length on the flanks is approximately 1 to 2 inches; and is generally longer of the lower side of the neck, the forechest, the belly, and the tail. Slight feathering on legs, chest and underside is allowed.

Solid colors in shades ranging mouse-gray to silver-gray; usually blending to lighter shades on the head and ears. A small white marking on the chest and on the toes are acceptable. As the Weimaraner is a working dog, any white spots denoting scars or as a result of injury are not to be penalized.

Eliminating Faults: Any white other than a spot on the chest and toes. Coat color other than gray. Widespread brown markings. Distinctly blue-colored coat.

Height range, measured at the withers, for males is from 23 to 27 inches, with the ideal being from 24 to 26 inches.

(A dog with a Disqualification must not be considered for placement in a conformation event, and must be reported to UKC.)
Unilateral or bilateral cryptorchid.
Viciousness or extreme shyness.
Albinism.
Distinctly black-colored coat. 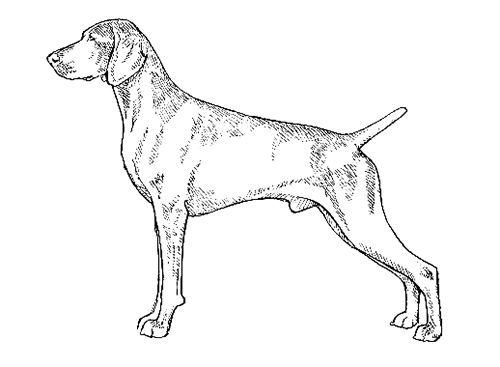 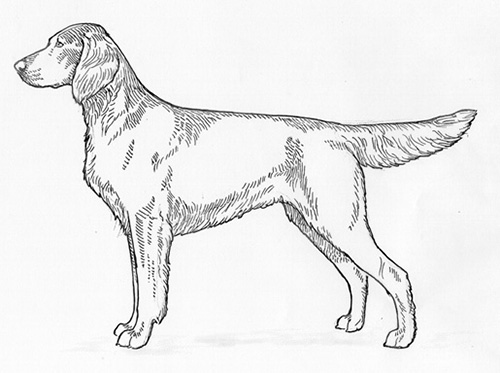