Descended from the ancient European Spitz, the Italian Volpino has been bred in Italy for many years. He was idolized in the palaces of the noblemen and also in the hovels of the common people, where he was appreciated for his guarding instinct.

The Italian Volpino was recognized by the United Kennel Club in 2006.

A small size spitz, very compact and square, with a long, stand off coat.

Lively, gay and playful. Very attached to his home and family.

Slightly egg shaped, and wider than it is long. There is a slight frontal furrow and a slight occipital protuberance. The top lines of the skull and muzzle are slightly convergent. The stop is rather accentuated.

Slightly shorter in length than the skull, and pointed. The nasal bridge is straight. The lips are short and tight and black in color.

The Italian Volpino has a complete set of evenly spaced, white teeth meeting in a scissors or even bite.

Set on the same line as the topline of the muzzle, and does not protrude beyond the front line of the lips. Always black in color.

Well opened and roundish in shape, with tight fitting, black eye rims. The iris is dark ochre in color.

Approximately the same length as the head, carried upright. No dewlap.

The shoulder blade and upper arm are long and meet at an angle of approximately 120 degrees.

Straight and fine in bone. The length of the forelegs is slightly more than half the height at the withers. The pasterns are slightly sloping.

Squarely built. The chest is deep to the elbow, and the ribs are well sprung. The withers are slightly high. The topline is straight to the loin, where it is slightly convex. The croup is very slightly sloping. There is a slight tuck up and moderate hollowing at the flanks.

The hind legs are straight and parallel to one another from buttocks to foot. They are fine in bone. The upper thigh is slightly longer than the lower thigh. There is moderate angulation at the stifle. The rear pasterns are straight and vertical.

The feet are oval shaped, with close knit toes and black nails and pads.

Set directly off the line of the croup and carried permanently curled over the back.

Disqualifications: Lack of tail or very short tail, whether natural or docked.

The coat is dense, very straight and long, and stands off the body. The coat is harsh and stiff and must be upstanding even when the dog is out of coat. The body gives the impression of being wrapped in a muff, particularly on the neck where the coat forms an abundant collar. The coat is short and smooth on the muzzle and on the ears. The tail is covered with very long hair. There are fringes on the back of the thighs.

Solid white and solid red. Champagne is accepted, but not desired. Pale orange shading on the ears is tolerated but is a fault.

Ideal height at the withers is 10.5 to 12 inches for males; 9.5 to 11 inches for females.
Eliminating Fault: One inch or more over the allowed size.

(An Eliminating Fault is a Fault serious enough that it eliminates the dog from obtaining any awards in a conformation event.)
Nose color other than black.
Wall eyes.
One inch or more over the allowed size.

(A dog with a Disqualification must not be considered for placement in a conformation event, and must be reported to UKC.)
Unilateral or bilateral cryptorchid.
Viciousness or extreme shyness.
Albinism.
Overshot bite.
Complete lack of nose pigment.
Complete lack of pigment of eye rims.
Drop ears.
Lack of tail or very short tail, whether natural or docked.
Any color other than stated.
Red markings on a white dog.
Black or white markings on a red dog. 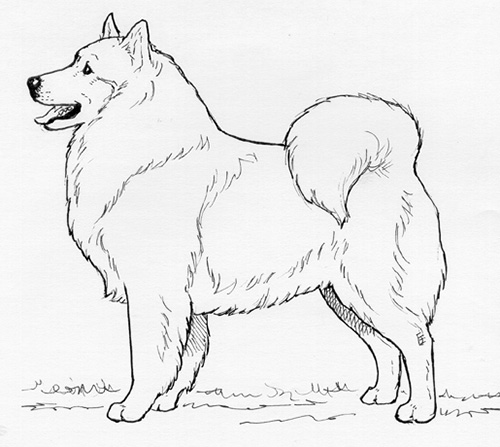