The Vizsla was developed in Hungary. Written descriptions and drawings that depict dogs similar in type to the Vizsla can be found in documents dating as far back as the 14th Century. Dogs of this type became extremely useful as hunting dogs and by the end of the 19th Century they were successfully competing in organized competitions for pointing dogs in Hungary.

The Vizsla was recognized by the United Kennel Club in 1984.

The Vizsla is a medium-sized, short-coated hunting dog, with a distinguished appearance and bearing, and a docked tail. They are rather lightly built, but robust. The coat is an attractive golden rust. This is a dog of power and drive in the field, yet is a tractable and affectionate companion in the home. Field-conditioned coats, as well as a brawny or sinewy muscular condition, and honorable scars, indicating a working hunting dog, are never to be penalized. The qualities that make a “dual dog” are always to be appreciated, not depreciated.

The Vizsla is a natural hunter endowed with a good nose and an above average trainability. Although they are lively, gentle mannered, demonstrably affectionate and sensitive, they are also fearless and possessed of a well-developed protective instinct.

The head is lean and muscular, with a moderate, but not deep, stop.

The skull is moderately wide between the ears. There is a median line down the forehead.

The square, deep muzzle tapers gradually from the stop to the tip of the nose. In profile, the muzzle (foreface) is of equal length to, or slightly shorter than, the skull. Whiskers serve a useful purpose; and their removal is not permitted. The jaws are strong. The lips completely cover the jaws, and are never loose or pendulous.

The eyes are medium in size, and medium in depth of setting. The surrounding tissue covers the whites of the eyes. Eye color blends with coat color. The lower lids are neither entropic nor ectropic, as these conditions are not conducive to the best interests of a hunting dog.

The nose is brown, with any other color considered faulty (with the exception of black, which is a disqualification). The nostrils are slightly open.

The thin, silky, proportionately long ears have rounded leather ends. They are set fairly low and hang close to the cheeks.

The moderately long, strong, smooth, clean, muscular neck is arched and broadens nicely into moderately laid-back shoulders. This type of neck and set of shoulders balances the moderately-angulated hindquarters.

The long shoulder blades are moderately laid back and are fairly close at the top.

The muscular forelegs are straight. The elbows are close. Dewclaws are to be removed from the forelegs.

The strong body is well-proportioned, slightly longer than tall when measured from breastbone to buttocks and withers to ground. The moderately broad, deep chest reaches to the elbows. The withers are high. The back is short and straight. The topline is slightly rounded over the loin and the set-on of the tail. The ribs are well-sprung. There is a slight tuck-up beneath the loin.

The Vizsla is not excessively wide when viewed from the rear. Too wide a rear is as faulty as one that is too narrow.

The cat-like feet are round and compact. The close toes have short, brown nails. The pads are thick and rough.

The tail is docked, with about one-third being taken off. The tail is set on just below the level of the croup and is carried at or near the horizontal. It is thicker at the root, reaching to the back of the stifle joint.

The short, smooth coat is dense and close-lying; without a woolly undercoat.

Solid golden rust in different shadings is the acceptable color. The solid coat actually ranges in shadings from lighter on the chest and turning darker in a saddle marking down the back over the withers, on the base of the skull, the ears and to the nose. Small white spots on the chest and occasional white hairs on the toes are acceptable. White that is due to aging is not faulted.

Height is measured at the highest point of the shoulder blades. Ideal height ranges are: Males, 22 to 24 inches; Bitches, 21 to 23 inches.

Proper movement is one of the most important factors to be considered in the Vizsla. The smooth, graceful gait is far reaching and light-footed. As speed increases, the dog single tracks.

(A dog with a Disqualification must not be considered for placement in a conformation event, and must be reported to UKC.)
Unilateral or bilateral cryptorchid. Viciousness or extreme shyness. Black nose. Massive areas of white on the chest or anywhere else on the body. Solid white extending above the toes. Albinism. 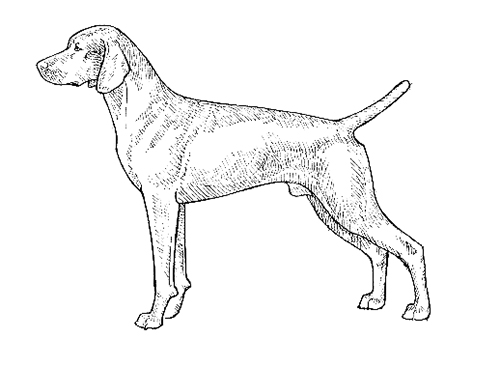