The Tyrolean Hound descends from the ancient Celtic hounds. Pure breeding from the old Bracke hounds began in Tyrol around 1860 and in 1896 a standard was drawn up. The Tyrolean Hound is an excellent hunting dog for the woods and mountains, used to hunt hare and fox and for tracking all sorts of wounded game.

The Tyrolean Hound was recognized by the United Kennel Club in 2006.

Medium sized, strong, muscular and sinewy hound with a dense, double coat and a flowing outline.

The skull is broad, clean and slightly arched.

The muzzle is moderately deep and straight.

The Tyrolean Hound has a complete set of evenly spaced, white teeth meeting in a scissors bite. The absence of up to two premolars is permitted.

Disqualifications: Overshot or undershot bite. The absence of any teeth other than two premolars.

The dark brown eyes are large and round, not deeply set. The third eyelid is pigmented and the eyerims are close fitting.

Broad, set on high and rounded at the ends, the ears reach nearly to the end of the nose when pulled forward.

The shoulder blades and upper arms are sloping and form a near right angle.

The legs are straight with medium bone.

The body is rectangular in shape. The chest is very deep and moderately broad, with a rounded forechest. The withers are pronounced and the back is firm and straight. The croup slopes gently. There is moderate tuck-up.

All joints in the hindquarter are well angulated.

The thighs are broad and muscular.

The tail is set on high and reaches at least to the hock joint. It is carried high when the dog is excited, a saber curve is permitted. A thick coated, brush like tail is preferred.

The coat is thick and double, with the undercoat being coarse rather than fine. The belly and buttocks and tail are well feathered.

(A dog with a Disqualification must not be considered for placement in a conformation event, and must be reported to UKC.)
Unilateral or bilateral cryptorchid.
Viciousness or extreme shyness.
Albinism.
Overshot or undershot bite.
The absence of any teeth other than two premolars.
Brown nose.
Distinctly pied coloring.
Liver. 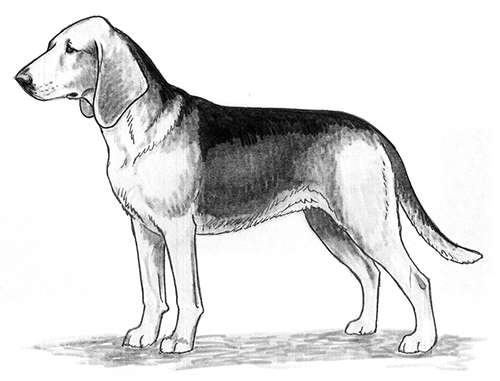