The Treeing Walker was developed from certain strains of English Walker Foxhounds. The credit for the development of the Walker Foxhound goes to two men - George Washington Maupin and John W. Walker. Both men were from Kentucky.

At least one major outcross was made in the 19th century that was to forever influence the breed. Strangely, the out-cross was with a stolen dog from Tennessee of unknown origin, known as Tennessee Lead.

Lead didn’t look like the Virginia strain of English Fox-hounds of that dog, but he had an exceptional amount of game sense, plenty of drive and speed, and a clear, short mouth.

Walkers were first registered with UKC as part of the English Coonhound breed. Then in 1945, at the request of Walker breeders, UKC began registering them as a separate breed - first as Walkers (Treeing) and then later as Treeing Walkers.

The Treeing Walker is a well-balanced, symmetrical, graceful hound well known for his ability to run and tree a variety of game on varying kinds of terrain.

Energetic, intelligent, active, courteous, composed, confident, fearless and kind. This breed has a super abundance of sense and is capable of great endurance. Excellent trailing, hunting and treeing instinct and ability. Voice is preferably a clear, ringing bugle or a steady, clear chop. Noticeable change in voice at tree.

Head is in pleasing proportion to the body. Skull is broad and full, slightly rounded, with a prominent occiput. Muzzle is rather long, tapering slightly to end, medium square, with flews sufficient to give a rather squared off appearance. Nasal bone is straight. Stop is medium, defined but not abrupt.

Rather large and prominent, with black pigment preferred. White or pink spots inside the nostril or on the outside of the nose are acceptable. A slightly sloping nostril is not objectionable.

Medium length and set moderately low, the ears hang gracefully, with a tendency to roll when the head is raised. Slightly round or oval at the tip, and soft and velvety to the touch.

Neck is medium in length, strong yet graceful, rising freely from the shoulders to carry the head well up. Throat is clean and free from folds of skin; however, a slight wrinkle below the angle of the jaw is allowable.

Forelegs are straight, with a fair amount of bone and a short, straight, slightly sloping pastern. Length of leg from elbow to ground is approximately one-half the height at the withers. Shoulders are sloping and cleanly muscled without a heavy or loaded appearance.

Chest is deep rather than broad, giving lung space. Ribcage is well-sprung and long, extending well back. Back is moderately long, muscular, level and strong. Loins short, broad and slightly arched. Tuck-up moderate. Overall proportion (measured from point of shoulder to point of buttocks and withers to ground) is square or slightly longer than tall.

Hips and thighs are strong and well muscled, for an abundance of propelling power. Stifle and hock joints are strong and firm, with moderate angulation. Legs are straight from hip to foot when viewed from behind. Dewclaws removed.

Solid, compact and well padded, with a cat-like appearance. Toes are well arched with strong nails.

Strong at root, moderately long and tapering, without flag. Set rather high and carried free, well up and saber like with a graceful forward curve.

Any other color combination is to be penalized in the show ring.

Height at withers for adult males, 22 to 27 inches. For adult females, 20 to 25 inches. Weight should be in proportion to size and working condition.

(A dog with an Eliminating Fault is not to be considered for placement in a bench show/conformation event, nor are they to be reported to UKC.)
Males under 22 inches or over 27 inches. Females under 20 inches or over 25 inches. (Entries in Puppy Class are not to be eliminated for being undersize.)

(A dog with a Disqualification must not be considered for placement in a bench show/conformation event, and must be reported to UKC.)
Undershot or overshot.
Unilateral or bilateral cryptorchid.
Viciousness or extreme shyness.
Albinism.
Any color or combination of colors other than described.
Deaf.
Blind. 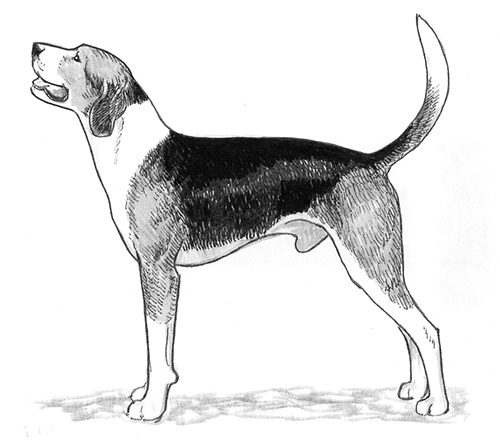