The immediate ancestor of the Toy Fox Terrier is the larger Smooth Fox Terrier. The original Fox Terrier breed standard was written in England in 1876. The size of the breed at that time was 18 to 20 pounds. Owners of these brave little dogs found that the smallest, which they called "runts", were the scrappiest of the bunch. These little dogs were prized for their temperament. Smaller dogs were developed and eventually were found in the seven pound range.

The Toy Fox Terrier is small in size, with a body that is square when viewed from the side. The length of the head, neck and legs are in proportion to the length and depth of the body. The body is compact, with the short tail carried upright. With a short, glossy coat that is predominantly white, the appearance is elegant, balanced and aristocratic. Highly intelligent, alert, loyal, fearless and having much endurance, this small dog, above all, has the conformation, characteristics and personality of a terrier.

The Toy Fox Terrier is self-possessed, spirited and determined. They are energetic, lively and strong for their size. They are not easily intimidated by other pets. Most are comical, entertaining and playful all of their life, which is generally long in comparison to many other breeds. They are friendly and loyal to their master or owners, yet protective. As a rule they are easily trained and adapt to showing in conformation and obedience, Any individuals lacking good terrier attitude and personality are to be faulted.

A typical head unmistakably stamps the dog as being of this breed. The head is in proportion to the rest of the body. It resembles a blunt wedge when viewed from both the front and in profile. When viewed from the front, the head widens gradually from the black nose to the base of the ears in practically an unbroken line. The distance from the nose to the stop is equal to the distance from the stop to the occiput.

The skull is moderate in width and slightly rounded. The skull and muzzle are both in proportion to the length and overall size of the head. The muzzle tapers gradually from the base of the ears to the nose. Medium stop; somewhat sloping.

The cheeks are flat and muscular, with the area below the eyes well-filled-in. Close-lying lips.

A full complement of strong, white teeth meeting in a scissors bite is preferred. An even bite is permissible. Loss of teeth should not be faulted for a dog of any age as long as the bite can be determined as correct.

Faults: Overshot over 1/16 inch. Puppy teeth retained after one year of age.

Dark in color; as dark as possible being preferred. Clear and bright, with a soft, intelligent expression. Globular, round, and somewhat prominent, yet not bulging. They are set well apart and fit well into the sockets.

Faults: Light color. Too large or too small. Protruding. Squinty. Dull. Set too wide apart. Set too close together. Lack of expression.

The nose is black in color. Puppies are usually born with pink colored noses, which generally turn dark before or by weaning time.

Pointed, inverted, V-shaped: placed well up on the sides of the head. Close together, but never touching. The inner base is on a level with the top of the skull. Always erect when alert; carried erect in motion. The size is in proportion to the size of the head and the overall size of the dog.

The length of the neck is approximately the same as that of the head and is in proportion to the body and size of the dog. The neck widens gradually, blending smoothly into the shoulders. The neck is clean and is slightly arched in a graceful curve.

The shoulders are sloping and well laid back (approximately at a 45 degree angle); blending smoothly from neck to back.

Faults: Straight shoulders. Loaded shoulders. Steep shoulders. Down in withers. Too far apart at withers. Out at elbows. Tied in elbows. Down in pasterns. Bowed front.

The body is balanced and tapers slightly from the ribs to the flank, with an evident, moderate tuck up.

The back is short and strong. The topline is strong, straight and firm, blending smoothly from the neck and shoulder to the tail.

The chest is deep, with an oval-shaped, well-sprung rib cage. The brisket extends to or just above the elbows. The chest is in proportion and in balance with the rest of the body.

Serious Faults: Sway back. Roach back. Sloping croup. Taller at hips than at withers. Taller at withers than at hips. Short-bodied. Long-bodied. Too much or too little tuckup. Lack of muscling. Muscle bound. Barrel-chested. Narrow chest. Brisket too shallow or too deep. Pointed brisket (when viewed from front.)

Strong and muscular; free of droop or crouch. The rump is well-filled-in on each side of the tail. The hipbones are on a level with or just below the back. Good width and depth at pelvis. Good muscling over hips, blending smoothly down over the upper to the lower thighs.

Any male six months of age, or older, should have two normal size testicles clearly visible and well-seated in the scrotum.

The hind legs appear strong and straight down to the feet. The upper and lower thighs are strong, well-muscled and of good length. The stifles are clearly-defined and well-angulated. The hocks are well bent. When viewed from the rear, the stifles, hocks and feet are straight and parallel to each other. Bone size is in proportion to the size of the dog. If present, dewclaws are removed.
Serious Faults: Sloping, breaking off in rump. Narrow and/or shallow pelvis.

The feet are oval in shape and compact, with arched toes and hard, tough and well-cushioned pads.

Faults: Round feet. Splayed. Flat. Feet turned in or out.

Set on high and on a level with the back. Carried gaily, above the horizontal line of the back when the dog is in motion or at attention; may be dropped when the dog is at ease. Docked with approximately 2/5th of the full tail remaining; equivalent length if a bobtail. Minimum length about one inch, maximum length about three inches, for dogs six months of age or older.

Serious Faults: Tail curled. Tail carried straight over the back. Set too low.
Faults: Too short. Too long. Not carried gaily when in motion.

A distinguishing feature of the breed, the coat is short, satiny and shiny; fine in texture and smooth to the touch. It is slightly longer at the ruff (back of neck and shoulder); uniformly covering the body. The underline, inside of front legs, and lower part of back legs are covered with at least a thin coat of hair. The skin is firm but pliable.

White and black with tan trim.

Black predominates on the head. The ears are black on the back with a very narrow, black rim on the inner edge. The tan trim is found on the cheeks and/or chops and as eye dots. Face with or without a white blaze. A blaze may extend onto either or both sides of the lower muzzle. White frost or tiny white spots on the lower muzzle are acceptable. White is the predominating body color, with or without black spots. Ticking is permitted to some degree provided the white predominates and general good looks are maintained. It is preferred that the black markings be free of any tan or brown shadings or very small tan or brown spots, but not faulted.

Everything in regard to color and markings are the same as above, except there is no tan trim.

Tan predominates on the head. The ears are tan on the back with a very narrow tan rim on the inner edge. Trim is a lighter or darker shade of tan on the cheeks and/or chops and eye dots, if visible. Face with or without a white blaze. The blaze may extend onto either or both sides of the lower muzzle. White frost or tiny white spots on the lower muzzle are acceptable. The body is predominantly white, with or without tan spots. Ticking is permitted to some degree provided the white predominates and general good looks are maintained. It is preferred that the tan markings be free of any black or brown shadings or very small black or brown spots, but not faulted.

Faults: A wide blaze that extends up to the eyes. Black or tan coloring, other than speckling (ticking) on the legs below the wrist joint of the forelegs or the hock joint of the hind legs. Any variation from that which is stated for the color and markings in any color combination is a fault. In a White and Tan tan markings that are too red, chocolate-shaded or brindled.

Dogs six months of age or older must weigh from three-and-one-half up to, and including, seven pounds.

Movement is smooth and flowing, with the legs moving straight, parallel and in a line at a walk or slow trot, with the back straight and the head and tail up. There is balance and coordination with good reach in the front and good drive from the rear. Movement is used to evaluate gait and to evaluate the parts involved in gait, therefore the points allotted to movement are included when considering all the dog's structural parts involved.

In gaiting, the stifles, hocks and feet should turn neither in nor out, and the hind legs should move in line with the front legs.

(A dog with a Disqualification must not be considered for placement in a conformation event, and must be reported to UKC.)
Unilateral or bilateral cryptorchid.
Extreme viciousness or shyness.
Undershot bite.
Overshot bite of more than 1/8 inch.
Wry mouth.
Liver-colored nose.
Dudley nose.
No tail.
Dogs of any age over seven pounds. Any dog six months of age or older weighing less than three-and-one-half pounds.
Ears not erect on any dog over six months of age.
Any solid-colored dog. Maltese (Blue/Grey) or chocolate markings.
Any color combination in which white is not the predominant body color.
Any color combination other than stated combinations. In any color combination, any dog whose head is more than half white. Any dog whose head and/or ear color and body spots are of different colors. 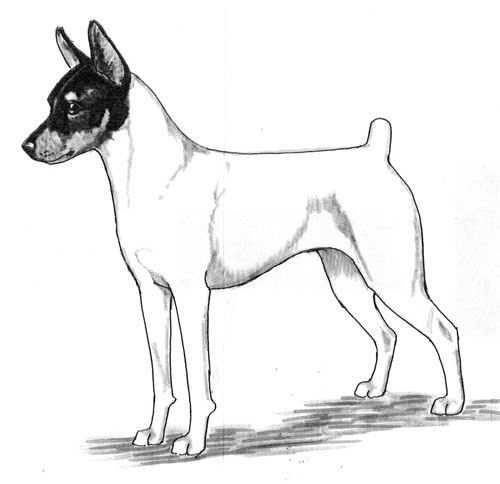