The Tosa Ken is a relatively new breed. Shortly after Commodore Perry’s arrival in Japan in 1854, Japanese dog fanciers began acquiring “foreign” dogs to cross with their native stock. According to the Japanese Kennel Club, the breeds that went in to the development of the Tosa Ken include, among other breeds, the indigenous Shikoku, Bulldogs, Mastiffs, German pointers and Great Danes.

In Japan, Tosas are the canine equivalent of Sumo wrestlers and are treated with great honor and ceremony. In the United States, the Tosa Ken serves as a companion dog and guardian of the home.

The Tosa Ken was recognized by the United Kennel Club on January 1, 1998.

The Tosa Ken is a large, short-coated dog, with a stately manner and a robust, powerful, and agile body. The body is slightly longer than tall. The head is large and broad with a boxy muzzle, pendulous flews, and clearly observable dewlap. There is wrinkling on the head, particularly when the dog is alert. Ears are of medium size, drop, and set high. The tail is uncut, very thick at the base, and tapering to the tip. The Tosa Ken may be solid colored, brindle, black with markings, or pied. The overall appearance should be that of a massive but dynamic and flexible athlete, a true canine samurai.

The Tosa Ken is normally a tranquil, quiet, and obedient dog with a calm but vigilant demeanor. The Tosa is quietly affectionate with its own family but may be somewhat aloof with strangers. This breed is also by nature watchful of other dogs and may react aggressively to dogs it considers intruders. Overtly aggressive behavior toward humans is uncharacteristic of the breed and highly undesirable. The Tosa responds best to positive-enforced training methods because of an inherent desire to please its owner. This breed matures slowly and individual dogs may not reach their prime until as late as four years of age.

The head is large and blocky when viewed from any angle. When viewed from the side, the skull and muzzle are roughly parallel to one another. The stop is moderately deep and fairly abrupt, forming an angle of about 130 degrees between the line of the muzzle and the line of the forehead. The skin on the skull and foreface is wrinkled, and the wrinkles may extend down the cheeks into the dewlap. The wrinkles become more prominent when the dog is alert. Excessive wrinkling is neither favored nor penalized. Gender difference in head is slight but apparent in that the female’s head is slightly less massive and is somewhat more feminine in appearance. White markings on the head are acceptable but not preferred.

Fault: Absence of wrinkle when alert.

The skull is large, slightly arched from side to side, and broad between the ears. Viewed from the top, the skull is 10 to 20 percent wider than it is long. There is a deep median furrow that diminishes in depth from the stop to the occiput. The muscles above and below the zygomatic arch are well developed and powerful. The supraorbital arches over the eyes are moderately well defined.

The muzzle is broad, blunt, and deep with a very slight taper from the stop to the nose. The length of the muzzle is equal to approximately 45 percent of the length of the head. Jaws are very powerful. The nasal bridge is straight. Lips are thick and tight in front, with dark pigment. Beginning just behind the canines, the lower lips become visible and increasingly pendulous as they reach the corner of the mouth.

The Tosa Ken has a complete set of large, evenly spaced, white teeth meeting in a scissors bite. The pigment inside the mouth is black, with a dark roof being desirable. The tongue may be pink, or pink with bluish-black spotting. Judges should not penalize missing incisors provided that there is sufficient space for a full complement of incisors.

The nose is always solid black. In profile, the tip of the nose extends just slightly beyond the end of the muzzle. The nostrils are large and well opened.

Serious Fault: Nose any color other than solid black.

Eyes are small to medium in size, round to slightly almond-shaped, set well apart, and rimmed with solid black pigment. Eye color is brown with preference given to the darker color. A bluish eye color in a Tosa under the age of 12 months is acceptable. Eyelids are tight, although some visible sclera or very slight haw is allowed.

Ears are of medium size, drop, and V-shaped, with slightly rounded tips. Ear leather is thin in comparison to the overall thick skin of the body. The ears are set high, level with the upper line of the skull, and hang close to the cheeks. Ears are covered with short, fine hair. The ears may be the same color as the background color of the dog’s coat, or somewhat darker in color. When pulled toward the eye, the ear should extend to the inside corner of the eye.

The neck is moderately long, thick, and slightly arched at the crest, particularly when the dog is alert. It is very powerful and muscular with a clearly observable dewlap. The skin is thick and elastic.

The shoulders are moderately laid back, moderately angulated, and well muscled, but not loaded. The upper arm is roughly equal in length to the scapula.

The forelegs are straight and muscled, with sturdy bone, very strong and set well apart. The elbows are set on a plane parallel to the body, and move freely, neither close to the body nor turned out. The pasterns are short, powerful, and slightly sloping when viewed in profile. Viewed from the front, straight pasterns are preferred, although a slight toeing out is acceptable.

Faults: Toeing out; straight shoulders; loose or loaded shoulders.
Serious Faults: Fine bone; lack of muscle; fiddle front; out at elbows; down at pasterns; knuckled over.

A properly proportioned Tosa Ken is slightly longer (measured from prosternum to point of buttocks) than tall (measured from the withers to the ground), and length of the front leg (measured from point of elbow to the ground) should be roughly equal to one-half of the dog’s height. The Tosa’s body is covered with thick, loose skin, especially around the throat. The chest is broad and deep, with ribs extended well back and moderately sprung. The topline inclines very slightly downward from the withers to a broad, muscular, level back. The loin is short, broad, muscular, and slightly arched, blending into a moderately sloping croup. The belly is moderately to well tucked up and firm.

Faults: Obesity; noticeably higher or lower at the croup than the withers; shallow or narrow chest; pronounced roach back, camel back, or sway back.

The feet are large, round, and tight. Pads are thick and elastic. Toes are well knuckled and nicely arched. Rear feet are slightly smaller than front. Nails are hard and preferably dark in color. Both front and rear feet should point straight forward.

Faults: Splayed, flat, or thin feet; toeing out. The seriousness of any of these faults is based on the degree of the defect.

The tail is set on as a natural extension of the topline, and is thick and muscular at the base, tapering to the tip. A “pump handle” tail is acceptable. A tail of the correct length extends to the hock. Correct tail carriage ranges from hanging naturally between the hocks when the dog is relaxed, to upright with a slight forward curve at the top of the tail when the dog is moving or excited. The tail should never curl over the back.

The coat is short, straight, dense, and tight to the body.

The preferred color is a deep, solid, rich red. The following colors, color combinations, and color patterns are all acceptable: All other shades of red, including fawn; any combination of red and black brindling; dull black; brown; black with red markings; and pied, which is the least desirable. Black masks are allowed without preference. Black tipped hairs are allowed without penalty. White markings are allowed but penalized in proportion to the amount of white on the dog. White other than on the chest or above the feet is to be discouraged.

Serious Fault: Any color, color combination, or color pattern other than listed above.

The minimum height for a mature male is 23½ inches, and 21¾ inches for mature females. As long as the minimum height requirement is met, no preference is given to greater or smaller size. Weight should be sufficient so that the dog presents a harmonious blending of sturdiness and substance with agility and athleticism. Males are typically larger with heavier bone and more muscle than females.

When trotting, the gait is effortless, smooth, powerful and well coordinated, showing good reach in front and drive behind. When moving, the topline remains level with only a slight flexing to indicate suppleness. Viewed from any position, legs turn neither in nor out, nor do feet cross or interfere with each other. As speed increases, feet tend to converge toward center line of balance.

(A dog with a Disqualification must not be considered for placement in a conformation event, and must be reported to UKC.)
Unilateral or bilateral cryptorchid.
Viciousness or extreme shyness.
More than four missing teeth.
Bluish eye color in a dog 12 months or older.
Functional abnormality of eyelids or eyelashes.
Cropped ears. Docked tail.
Albinism.

Although some level of dog aggression is characteristic of this breed, handlers will be expected to comply with UKC policy regarding dog temperament at UKC events. 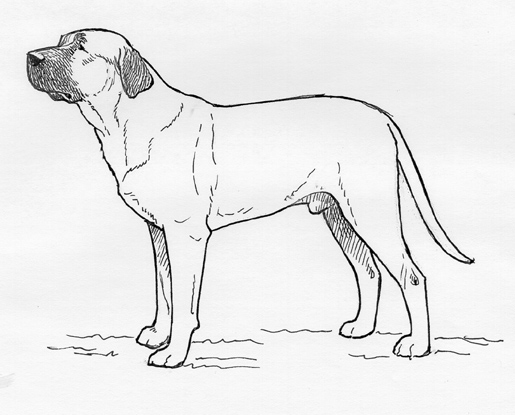