The origin of the Thai Ridgeback is unknown, but the breed developed in eastern Thailand, where the breed was kept pure by isolation. Descriptions of the breed can be found in written references dating back to the 17th century. The breed’s name comes from a ridge of hair that runs along the dog’s back, a trait found in only three breeds of purebred dogs. The Thai Ridgeback was used for hunting, and as a guard dog. Today the breed is still very rare outside of Thailand.

The Thai Ridgeback was recognized by the United Kennel Club on January 20, 1996.

The Thai Ridgeback is a medium-sized pariah-type dog, with a wedge-shaped head, prick ears, and a short, smooth coat. The length of body from point of buttocks to point of sternum is about 10 percent longer than the height measured at the withers. The depth of chest is equal to the length of the foreleg. The tail is carried vertically or curved like a sickle.

This breed is characterized by a ridge of hair growing in the opposite direction to the rest of the coat. This ridge starts at the withers and extends down the spine to the top of the pelvis bones. This breed is very active and agile, with excellent jumping and climbing abilities. They are devoted to family members but are inclined to be wary of strangers.

The head is proportional to the size of the body. Viewed from the front, the Thai Ridgeback head forms a vertically elongated octagon. The octagonal shape is formed by a flat line between the ears; a line sloping downward and outward from the inside corner of the ear to the outside corner of the ear; a straight line downward from the outside corner of the ear to the point of the jawbone; a line slanting downward and inward from the point of the jawbone to the lower outside corner of the muzzle; a short, horizontal line across the bottom of the muzzle; and three corresponding lines around the other side of the face. Viewed from above and from the side, the head is wedge-shaped. The top lines of the skull and muzzle are roughly parallel to one another when viewed from the side, and joined by a well-defined, but not abrupt, stop. The ratio of muzzle length to skull length is 2:3. Supraorbital arches over the eyes are well defined but not pronounced. The forehead is wrinkled when the dog is attentive.

Black marking on the tongue is preferable.

The skull is flat and moderately broad. The skull tapers slightly from the widest point to the base of the muzzle. The cheeks are flat.

Viewed from above and from the side, the muzzle tapers toward the nose, forming a blunt wedge. The nasal bridge is straight. Lips are tight, with good pigmentation.

The Thai Ridgeback has a complete set of evenly spaced, white teeth meeting in a scissors bite.

Black. In bluish dogs, the nose is bluish.

The eyes are medium-sized and almond-shaped. Eye color is dark brown, except in blue dogs, where amber eyes are permitted.

The ears are strongly erect, medium size, triangular in shape, and set at the outer edges of the skull. Viewed from the side, the back line of the ear inclines slightly forward from the base to the tip in line with the back of the neck. Ears are never cropped.

The neck is moderately long and slightly arched, but strong and well muscled, blending into sloping shoulders. The skin on the throat may form slight, smooth, non-pendant folds.

The shoulders are well laid back and muscular. The scapula and the upper arm form an angle of about 110 degrees. When standing, a line dropped from the highest point of the withers would pass just behind the forelegs.

The muscles of the upper leg are firm and well developed. The forelegs are straight, with strong, moderately short, very slightly sloping pasterns, and moderate bone. The shoulder blade and the upper arm are roughly equal in length. The upper arm lies close to the ribs but is still very mobile, with the elbow moving close to the body.

The Thai Ridgeback is slightly longer, measured from prosternum to point of buttocks, than tall, measured from the withers to the ground. The ribs are moderately sprung out from the spine, forming a strong back. The back is level and well muscled with a broad, muscular, slightly arched loin. The chest is moderately wide and the brisket extends to the elbow. The forechest should extend in a shallow oval shape in front of the forelegs, but the sternum should not be excessively pointed. The belly is well tucked up. The croup is broad and moderately sloping.

The thighs are well muscled. The rear legs are well angulated at stifle and hock joints. The hocks are well let down. Viewed from the rear, the rear pasterns should be parallel to each other; from the side, they should be perpendicular to the ground.

The feet are oval in shape, with toes well arched and tight. Pads are well developed.

The tail is set on as a natural extension of the topline, and tapers from its thick base to a point. The tail extends approximately to the hock but is normally carried erect and slightly curved.

Skin is soft, fine and tight.

The coat is short and smooth, with a clearly-defined ridge of hair growing in the opposite direction of the rest of the coat extending down the spine from the withers to the pelvis bones. There are various shapes and lengths of the ridges, but they must be symmetrical on either side of the backbone, and be within the width of the back. Crowns and whirls at the head of the ridge are acceptable.

The ideal height for a mature Thai Ridgeback male is 22-24 inches; and 20-22 inches for a female. Weight should be in proportion to the height.

Fault: More than one inch over or under the height range.

Correct movement is essential in this breed. The Thai Ridgeback moves with strides of moderate length in a quick, agile trot. The forelegs and hind legs are carried straight forward, with neither elbows nor stifles turned in or out. While the dog is gaiting, the topline remains firm and appears level.

(A dog with a Disqualification must not be considered for placement in a conformation event, and must be reported to UKC.)
Unilateral or bilateral cryptorchid.
Viciousness or extreme shyness.
Absence of ridge.
Long coat.
Albinism. 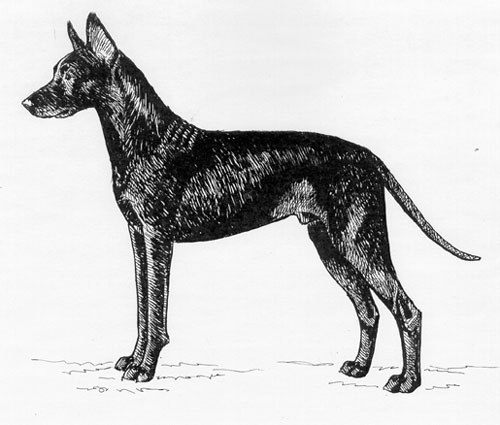