The Teddy Roosevelt Terrier is an American breed descended from the terriers brought over by English miners and other working class immigrants. These versatile terriers probably included crosses between the Smooth Fox Terrier, the Manchester Terrier, the Bull Terrier, the Beagle, the Whippet, the Italian Greyhound, and the now extinct white English Terrier. These dogs were used as ratters, and soon became known as “Rat Terriers.” Two types of Rat Terriers evolved, distinguished primarily by leg length. The short-legged Rat Terriers developed a devoted following and were named in honor of President Teddy Roosevelt, who was once thought to have owned these ratters.

The Teddy Roosevelt Terrier was recognized by the United Kennel Club on January 1, 1999.

The Teddy Roosevelt Terrier is a low-set, muscular, active, small-to-medium size hunting terrier. The preferred ratio of length of body (prosternum to point of buttocks) to height (withers to ground) is between 10:7 and 10:8. The head is broad, slightly domed, wedge-shaped, and proportionate to the size of the body. Ears are V-shaped, set at the outside edges of the skull, and may be erect or button. A docked tail is preferred, but a natural bob tail or a natural tail carried in an upward curve are also acceptable. The Teddy Roosevelt Terrier comes in solid white, other solid colors with markings, and white with a variety of colored patches. The Teddy Roosevelt Terrier should be evaluated as a working terrier, and exaggerations or faults should be penalized in proportion to how much they interfere with the dog’s ability to work. Honorable scars resulting from field work are not to be penalized.

Disqualification: A longer-legged, square-bodied dog whose proportions vary significantly from the desired ratio lacks breed type and must be disqualified.

The Teddy Roosevelt Terrier is an energetic, alert dog whose curiosity and intelligence make him very easy to train. He thrives on human companionship and will enthusiastically share any activity with his owner. The Teddy Roosevelt Terrier is a lively, friendly, affectionate dog with his family but can be somewhat of a one-person dog. With his strong protective nature and well-developed pack instincts, the Teddy Roosevelt Terrier gets along well with children (when raised with them), cats, and other dogs. He is a bold, tenacious hunter with seemingly unlimited energy whose size and endurance makes him an excellent hunter of squirrels and vermin. Teddy Roosevelt Terriers should not be sparred during conformation judging. This is a long-lived breed and it is not uncommon for one to live to 15 or 16 years of age.

The skull is broad and slightly domed. It tapers slightly toward the muzzle. The jaws are powerful with well-muscled cheeks.

The muzzle is well filled-out under the eyes, well-chiseled, and tapers slightly from the stop to the nose. Jaws are powerful and hinged well back allowing the dog to open his mouth wide enough to catch rats and other rodents. Lips are dry and tight with no flews. Lip pigment matches nose pigment.

The Teddy Roosevelt Terrier has a complete set of good-sized, evenly spaced, white teeth. A scissors bite is preferred but a level bite is acceptable.

The nose is black or self-colored.

Eyes may be round to almond shaped and are small, somewhat prominent, and set obliquely. Eye rims match nose pigment. Eye color ranges from dark brown to amber and corresponds with coat color. Hazel eyes are acceptable in dogs with lighter coat color. Blue or amber eyes are permitted in blue-colored dogs only, but a dark gray eye with gray eye rims is preferred.

Faults: Bulgy eyes; deep-set eyes; light-colored eyes in a dog with black coat color or black pigment; both eyes not of matching colors; eye with iris containing more than one color; wall or china eye.

The neck is clean, moderately long, slightly arched, and tapers slightly from the shoulders to the head. The neck blends smoothly into well laid-back shoulders.

Shoulders are smoothly muscled. The shoulder blades are well laid back with the upper tips separated by about three fingers’ width at the withers. The upper arm appears to be equal in length to the shoulder blade and joins it at an apparent right angle. The elbows are close to the body. Viewed from the front, the forearm turns slightly inward so that the distance between the wrists is slightly less than the distance between the elbows, and the pasterns are straight, although a slight bend in the pastern is acceptable. Viewed from the side, pasterns are strong, short, and nearly vertical.

A properly proportioned Teddy Roosevelt Terrier is longer (measured from prosternum to point of buttocks) than tall (measured from the withers to the ground) with a ratio of between 10:8 to 10:7. The length of the front leg (measured from point of elbow to the ground) should approximately equal one-third of the dog’s height. Whether the dog is standing or moving, the line of the back is strong and level. The loin is moderately short, slightly arched, and muscular, with moderate tuck-up. The croup is slightly sloping. The ribs extend well back and are well sprung out from the spine, forming a broad, strong back, then curving down and inward to form a deep body. The brisket extends to or just below the elbow. Viewed from the front, the chest between the forelegs is well filled in on either side of the prominent breast bone and of moderate width. Viewed from the side, the forechest extends in an oval shape well in front of the forelegs.

The hindquarters are strong and flexible, and smoothly muscled, with the length of the upper thigh somewhat longer than the lower thigh. The angulation of the hindquarters is in balance with the angulation of the forequarters. The stifles are well-bent, and the hocks are well let down. When the dog is standing, the short, strong rear pasterns are perpendicular to the ground and, viewed from the rear, parallel to one another.

The feet are compact and slightly oval in shape, with the two middle toes slightly longer than the other toes. Cat feet are acceptable and toes may be well split up but not flat or splayed. Front dewclaws may be removed. Rear dewclaws must be removed.

The tail is set on at the end of the croup. A docked or natural bob tail is preferred, but a natural tail is not a fault. Docking should be between the second and third joint of the tail. The natural tail is thick at the base and tapers toward the tip. When the dog is alert, the tail is carried in an upward curve. When relaxed, the tail may be carried straight out behind the dog.

The coat is short, dense, and medium-hard to smooth, with a sheen. Whiskers are not removed.

Disqualifications: Merle; absence of white; any solid color other than white.

Weight will vary depending on the size of the individual dog.

Faults: Height under 8 inches or over 15 inches; obesity.

Rear quarters have strong driving power, with hocks fully extending. Viewed from any position, legs turn neither in nor out, nor do feet cross or interfere with each other. As speed increases, feet tend to converge toward center line of balance.

(A dog with a Disqualification must not be considered for placement in a conformation event, and must be reported to UKC.)
Unilateral or bilateral cryptorchid.
Viciousness or extreme shyness.
Unilateral or bilateral deafness.
A long-legged, square dog whose proportions vary significantly from the desired ratio.
Hanging ears.
Wire or broken coat.
Long coat.
Merle.
Bi-color where neither color is white.
Absence of white.
Any solid color other than white.
Albinism. 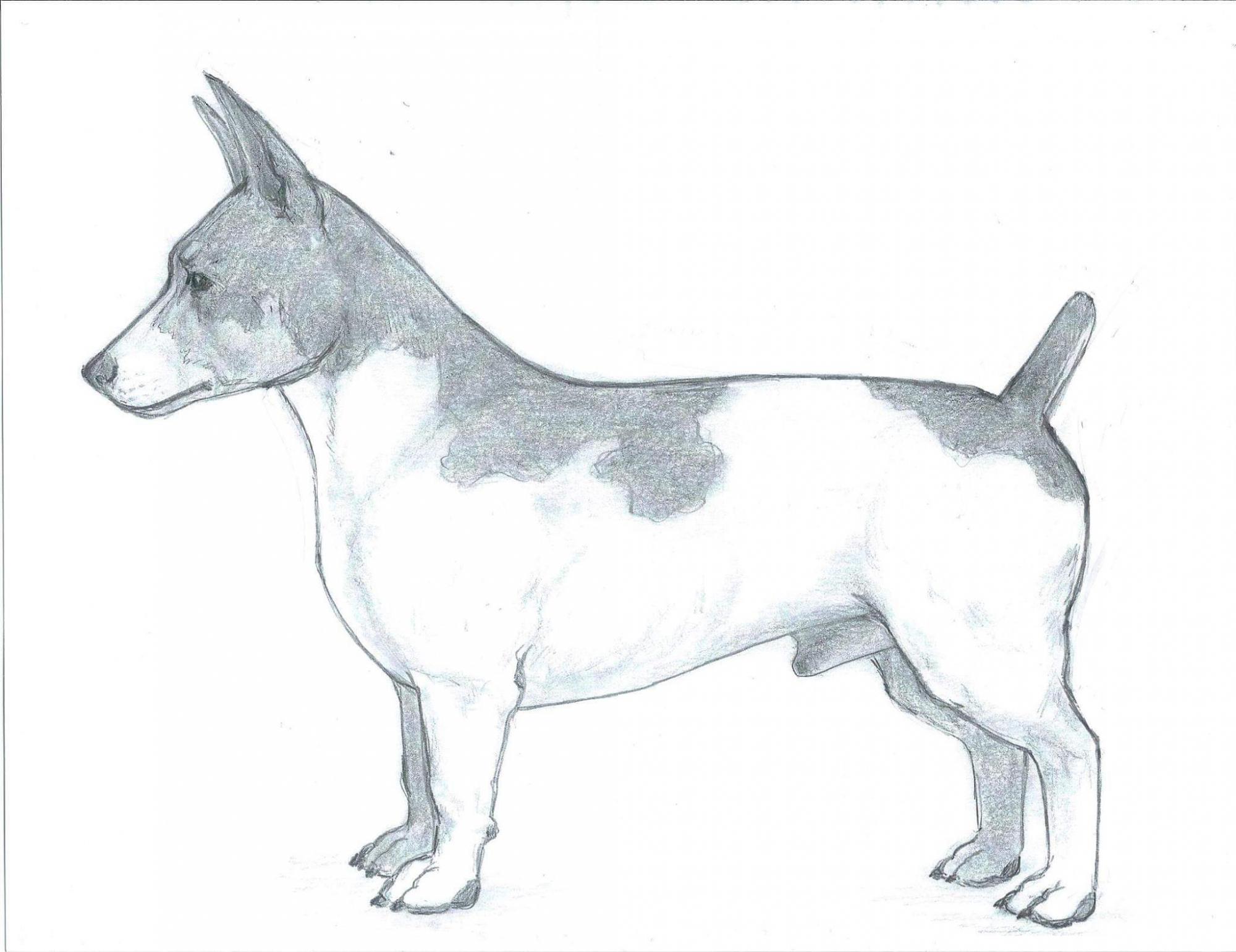