The history of the Swedish Vallhund dates back to eighth century Sweden where the breed worked as farm dogs, primarily herding cattle. The breed was nearly extinct in 1942 when Count Bjorn Von Rosen and K. G. Zettersten made a concerted effort to revive the breed. They tracked down the best remaining specimens in the country and carefully bred them to a standard written by Count Von Rosen. The breed was recognized by the Swedish Kennel Club in 1943. In 1964, the name in Sweden was changed to “Vasgotaspets,” after the province of Vastergotland where the breed continues to flourish. In Sweden, it is believed that the Vallhund traveled to Wales with Viking raiders and became the ancestor of the Corgi breeds.

The Swedish Vallhund was recognized by the United Kennel Club January 1, 1996.

The Swedish Vallhund is a small, sturdily-built, Spitz-type dog, with a wedge-shaped head, prick ears, and close-fitting, hard coat of short-to-medium length. The correct relationship of height to length of body is 2:3. The tail may be natural or bobbed. The appearance of the Swedish Vallhund conveys intelligence, alertness and energy.

The Swedish breed standard says that in type, the Vallhund is a wolf-like animal in everything except size. His short legs, intelligence and energy made him suitable as a herding dog. Those same characteristics today make him successful in obedience, agility, tracking, and any other activity in which he is free to take an active part. He requires plenty of exercise and mental stimulation. The correct double coat with the characteristic “harness markings” are essential features of this breed.

Balance, outline, intelligence, temperament, and movement are of overriding importance. The Swedish Vallhund is a thoroughly sound animal willing and able to do its work. Working dogs are not to be penalized under any conditions for scars or blemishes that are due to occupational injuries.

This breed matures slowly and individual dogs may not reach their prime until as late as four years of age.

The head is clean, dry, and fairly long, with a distinct stop. When viewed from the top or side, the skull and muzzle taper evenly toward the nose to form a blunt wedge shape.

The skull is broad and nearly flat.

Faults: A too short skull; a too round skull.

When viewed from the side, the blunt muzzle looks rather square and is just slightly shorter than the skull. It should be well filled-in under the eyes. The lower jaw is strong and blunt but not protruding. Lips are black and tightly closed.

The Swedish Vallhund has a complete set of good-size, evenly spaced, white teeth meeting in a scissors bite.

The nose is always solid black. In profile, the nose is on the same line as the top of the muzzle and does not extend beyond the forepart of the muzzle.

Faults: Nose any color other than solid black.

The eyes are of medium size, oval in shape, and dark brown with black eye rims.

The ears are of medium size, prick, and set at the outer edge of the skull, but not too low. The tips of the ears are pointed but never cropped, and point upward. The leather is hard from base to tip and covered with smooth hair. The ears are mobile and react sensitively to sounds.

The neck is long, strongly muscled and with good reach, blending smoothly into well laid back shoulders.

The ratio of height (measured from withers to the ground) to length of body (measured from point of shoulder to point of buttocks) is 2:3. The topline of the back is level and well-muscled with a short, strong loin. The ribs are well sprung out from the spine, forming a strong back, then curving down and inward to form a body that would be nearly oval if viewed in cross-section. The chest is moderately broad and let down about two-fifths the length of the foreleg. When viewed from the side, the lowest point of the chest is immediately behind the foreleg. The forechest should extend in a shallow oval shape well in front of the forelegs but the sternum should not be excessively pointed. The croup is broad and very slightly sloping. The belly is only slightly tucked up.

The thighs are very muscular and powerful for the size of the dog.

The feet are of medium size, oval in shape, well-knuckled up, with thick strong pads. Dewclaws may be removed.

The Swedish Vallhund may be born with a tail or a natural bob. In the past, virtually all Swedish Vallhund standards required a short tail so most tails were docked. Now that England and many European nations have banned tail docking, the following described tails are acceptable:

The Swedish Vallhund may be shown with a natural or docked tail.

The Swedish Vallhund has a water-repellent double coat. The outer coat is harsh and lies close to the body. The undercoat is thick, soft and dense. The coat is short on the front of the legs, slightly longer on the neck, chest and back part of the hind legs. A long outer coat with feathering on the ears and back of the legs may be seen from time to time but it is not desirable. The Vallhund should be shown in its natural condition, but the feet may be tidied if desired.

Color may be any shade of gray, red or yellow/brown sable or any combination of these colors as long as they are sabled. Hair in lighter shades of these colors is desirable on the muzzle, throat, chest, belly, buttocks, feet, and hocks. White in place of these lighter shades is also acceptable as long as the amount of white never exceeds one-third of the dog’s total color. A black sable coat with the aforementioned lighter shading is permissible. A "blue" coat may occasionally be seen but it is very undesirable. A well-defined mask, with lighter hair around eyes, on muzzle, and under the throat, giving a distinct contrast to the upper mask is highly desirable. A dark muzzle is acceptable. A band of lighter hair, running from near the withers to behind the elbow is known as “harness markings.” These are strongly preferred.

The Swedish Vallhund is a herding dog which requires an easy, almost floating movement, agility, and endurance. The correct shoulder assembly and well-fitted elbows allow a long, free stride in front. The forelegs should reach well forward without too much lift. Viewed from the front, the legs do not move in exact parallel planes, but incline slightly inward to compensate for shortness of leg and width of chest. Hind legs should drive well under the body and move on a line with forelegs, with hocks turning neither in nor out. Feet should travel parallel to the line of motion with no tendency to swing out, cross over, or interfere with each other. Short, choppy movement; rolling or high-stepping gait; or close or overly wide movement are incorrect. 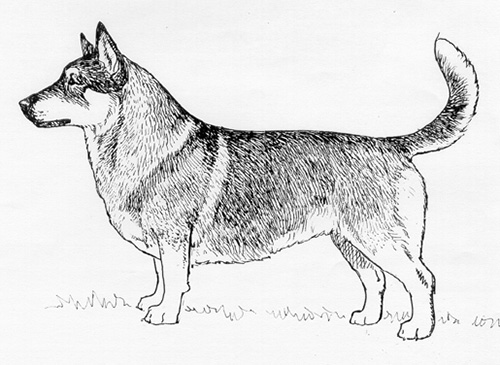