The Swedish Elkhound is a breed with ancient origins, though it was only recognized as a separate breed in 1946, because it used to be shown together with the smaller Norwegian Elkhound. The breed was mainly used for hunting Elk, though it was sometimes used on bear and lynx as well.

The Swedish Elkhound was recognized by the United Kennel Club in 2006.

The Swedish Elkhound is a large, rectangular spitz breed, clean cut, strong, substantial and agile. It must not give the impression of having a long body or of being overly heavy in body, as it is a breed known for great endurance.

The head is clean cut, and rather long.

Broad between the ears, slightly arched. The stop is well defined but not too deep.

The muzzle is slightly shorter in length than the skull. It tapers in width from the stop to the nose. It must not be snipy. The nasal bridge is straight, strong and broad. The lips are tight fitting and the cheeks are clean.

The Swedish Elkhound has a complete set of evenly spaced, white teeth meeting in a scissors bite.

Slightly oval in shape, brown in color, with a keen, yet calm, expression.

High set, perfectly erect, pointed and mobile. Slightly longer than the width at the base. The inside of the ears are well covered with hair.

The shoulder blades are long and well laid back.

Straight and clean cut, with strong bone. The elbows are close to the chest.

The body is powerful and slightly longer than tall. The chest is deep and the ribs are well sprung. The topline is straight, and slopes slightly from withers to croup. The loin is broad and well developed, and the croup is broad and only slightly sloping. There is a slight tuck up.

The hind legs are parallel when viewed from behind. There is good angulation at the stifle and hock joints.

The feet are somewhat oval in shape, with tightly knit toes.

The tail is set high. It is of medium length and even thickness. It is carried curled, but not tightly twisted over or close on the back. The coat on the tail is dense but without fringe.

The outer coat is rather close lying, but not flat. The undercoat is short, soft and light in color, preferably cream. The coat is smooth on the head and the front of the legs, longer on the neck, chest, tail and back of legs and thighs.

Light or dark grey, with characteristic light grey or cream markings on the sides of the muzzle, cheeks, throat, chest, belly, legs and under the tail.

Powerful and free, with good reach. At a brisk trot, the breed single tracks.

(An Eliminating Fault is a Fault serious enough that it eliminates the dog from obtaining any awards in a conformation event.)
Over or under the allowed height.

(A dog with a Disqualification must not be considered for placement in a conformation event, and must be reported to UKC.)
Unilateral or bilateral cryptorchid.
Viciousness or extreme shyness.
Albinism.
Overshot or undershot bite.
Hanging ears.
Lack of characteristic cream colored markings. 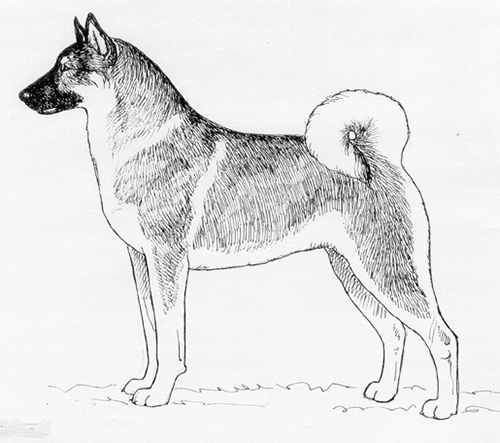