Though similar to them, the Stumpy Tail Cattle Dogs are not Australian Cattle Dogs with docked tails, but are cousins to that breed, and a breed in their own right.

In Australia, their country of origin, “Stumpies” are much sought after for their working ability. Both red and blue Stumpy Tails are extremely faithful, and tireless workers.

The Stumpy Tail Cattle Dog was recognized by the United Kennel Club on January 1, 1996.

The general appearance is that of a well-proportioned working dog, rather square in profile, with a hard-bitten, rugged appearance, and sufficient substance to convey the impression of the ability to endure long periods of arduous work under whatsoever conditions may prevail.

The “Stumpy” possesses a natural aptitude in the working and controlling of cattle, and a loyal, courageous and devoted disposition. It is ever alert, watchful and obedient, though suspicious of strangers. At all times, it must be amenable to handling in the show ring.

Any deviation from the standard is considered a fault and is to be penalized according to the degree of deviation.

The skull is broad between the ears and flat, narrowing slightly to the eyes. The stop is slight, but definite. The cheeks are muscular without being coarse.

The foreface is of moderate length, and well filled up under the eye. The deep, powerful jaws taper to a strong, blunt muzzle.

The moderate sized eyes are almond in shape and dark brown in color. They are neither full nor prominent. Expression is alert and intelligent.

The nose is always black, regardless of the color of the individual dog.

The moderately small ears are pricked and almost pointed. They are set on high, yet well apart. The leather is moderately thick. The inside of the ear is well furnished with hair.

The medium-length, muscular neck is exceptionally strong, and dry. It is arched at the crest and broadens to blend into the body.

The shoulders are clean, muscular and sloping.

The elbows are parallel to the body. The muscular forelegs are well boned. Viewed from any angle, they are straight, with strong, flexible pasterns.

The length of the body, from the point of the breastbone to the buttocks, is equal to the height of the dog, measured at the withers. The back is level, broad and strong. The loins are muscular and deep. The chest is deep and moderately broad. Ribs are well-sprung, and there is a slight tuck-up.

The hindquarters are broad, powerful and muscular. The thighs are well developed.

The stifles are moderately turned. The strong hocks are moderately let down, with sufficient bend. When viewed from behind, the hind legs, from hock to feet, are straight, and placed neither too close nor too wide apart.

The strong, round feet have deep pads, and well-arched, closely-knit toes. The strong, short nails are dark in color.

The natural length of the undocked, natural bob tail does not exceed 4 inches. It is set on high, but not carried much above the level of the back.

The breed is double coated. The outer coat is moderately short, straight, dense and of medium harsh texture. The undercoat is short, dense and soft.

The coat around the neck is longer, forming a mild ruff. The hair on the head, legs, and feet is short.

The acceptable colors are Blue and Red.

The dog is blue speckle or blue mottled over the whole body, with or without black markings on the head or body. Blues should not have a red undercoat or the appearance of red anywhere in their coat.

The color is a good, even red speckle or red mottle all over, with or without red markings on the head or body. Reds should not have a blue undercoat or the appearance of blue anywhere in their coat.

Males or females over or under the acceptable height ranges are undesirable.

Soundness of movement is of foremost importance. Action is true, free, supple and tireless. The movement of the shoulders and forelegs is in unison with the powerful thrust of the hindquarters. Capability of quick, sudden movement is essential.

(A dog with a Disqualification must not be considered for placement in a conformation event, and must be reported to UKC.)
Unilateral or bilateral cryptorchid.
Viciousness or extreme shyness.
Albinism.
Undershot or overshot bite. 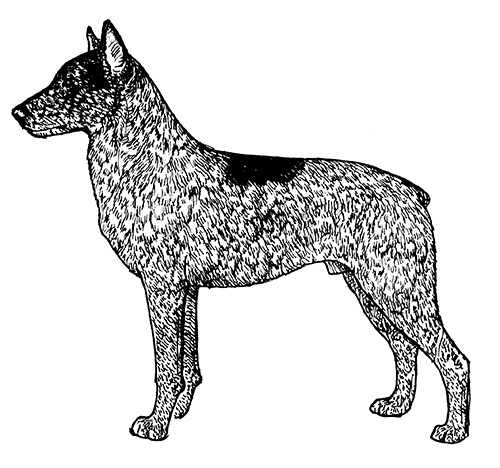