The Spinone Italiano is a rough-haired dog of Italian origin, and is thought to be a very old and established hunting breed. In his book Le Parfait Asseur, (The Perfect Hunter, 1683), Selicourt spoke of a "griffon" coming from the Piedmont region of Italy. In the Middle Ages, and in the 15th century, this type of dog was often represented by famous artists. The breed is also referred to as the Italian Coarsehaired Pointer.

The Spinone Italiano was recognized by the United Kennel Club on January 1, 1995.

The Spinone is a dog of solid construction, and is robust and vigorous. It has powerful bone, well-developed muscles, and rough hair. Its build tends to fit into a square. The length of the body is equal to, or slightly longer than (by �..." inch to 1 inch), the height of the dog.

The Spinone is naturally sociable, docile and patient. The breed is an experienced hunter in all terrains, is very resistant to tiredness, goes easily into brambles, and readily enters cold water. By nature, the breed is an excellent retriever and competent swimmer. It is built for an extended, fast trot. Height is measured at the withers. Any departure from the ideal is to be faulted according to the degree of deviation.

Serious faults: Parallel planes of the skull and muzzle. Dish-faced.

Oval-shaped, and gently sloping on the sides. The occiput is very well developed. The parietal crest is well marked. The bulge of the forehead is not very developed, not towards the front nor in height. The brows (superciliary regions) are not too prominent. The stop is barely marked. The medial-frontal furrow is very pronounced.

Equal in length to the length of the skull. Its depth, measured at mid length, is one-third of its length. The bridge of the muzzle is preferably Roman, but straight is acceptable. Seen from the front the muzzle is square shaped. The lower profile of the muzzle is defined by that of the upper lips which are fine in texture. The cheeks are lean.

The large, well-opened eyes are set well apart. Both eyes are on the same frontal plane. The eye is almost round, and neither protrudes nor is set deep. Eye color is ochre, more or less dark according to the color of the coat. Expression is soft and sweet.

The nose is in the same line as the nasal bridge. It is voluminous, and spongy in appearance, with a very thick and quite rounded upper edge. The nose protrudes over the forward vertical line of the lip. The nostrils are large and protruding. In white dogs, the pigment is flesh-colored. It is a bit darker in white and orange dogs. It is chestnut brown in brown (roan to chestnut) dogs.

The ears are practically triangular in shape. In length, they are not more than two inches longer than the line of the throat. In width, they go from the point of the inset of the head to the neck to the middle of the zygomatic arch.

The ear is nearly always carried low, and has little erection power. The forward edge is close to the cheek. It is not folded, but turned inwards. The tip of the ear is slightly rounded.

Ear cartilage is fine. The skin is covered with dense hair mixed with longer scattered hairs, which becomes thicker at the edges.

The powerful, muscled neck is clearly distinguished from the nape, and merges harmoniously into the shoulders. The length of the neck must not be less than two thirds inch of the length of the head. Its circumference reaches a third of the height of the dog. The lower edge of the neck has a lightly-developed double dewlap.

When viewed from the front, the forelegs are perfectly parallel, and perpendicular to the ground, with strong bone. Length of leg from elbow to ground is one-half the height at the withers. The point of the elbow is a little forward of a line dropped from the top of the withers to the ground. Pasterns are long, flat and flexible.

The body is almost square. The upper profile of the back is made up of two segments. The first, which is nearly straight, slopes from the withers to the eleventh dorsal vertebra. The second rises gradually to the strong and well arched loin.

The chest, which descends to at least the level of the elbows, is broad, deep and well rounded.

The slanting ribs are well sprung, with wide spaces between the ribs. The back ribs (false ribs) are long, oblique and well opened.

The slightly convex loin has well-developed muscles. The croup is long, and the hipbones fall away from the spine at an angle of approximately 30 degrees, making a slightly rounded croup.

The underline is straight to the back of the ribs, then slightly tucked up.

Thighs strongly muscled and broad, with the upper thigh slightly longer than the lower thigh. Hock joint is broad, and angulation at the joint is about 150 degrees. Rear pasterns are perpendicular to the ground and their length is about one-third the height of the dog.

A single dewclaw on each of the hind legs is acceptable.

The forefeet are round and compact. The hind feet may be slightly more oval than the forefeet. The arched toes are well-closed. The feet are covered with short, thick hair, including the spaces between the toes. The pads are lean and hard, and are pigmented more or less according to the coat color. The strong nails curve toward the ground. They are well pigmented, but never black.

The tail is thick, especially at the base. It is carried horizontally or down. There are no fringes. The tail is generally docked to a length of from six to ten inches.

Fault: Tail carried above the level of the back.

The hair on the body is from 1½ to 2½ inches in length. The hair is stiff, dense and rather flat, with a lack of undercoat. It is shorter on the muzzle, the head, the ears, the front side of the legs, and on the feet. On the back side of the legs, the hair is a rough brush, but never with fringes. Long, stiff hair garnishes the eyebrows and the lips, forming eyebrows, a moustache, and a tufted beard. The very thick skin fits close to the body. It is thinner on the head, throat, groin, under the arms, and on the back parts of the body. In the elbow folds, it is soft to the touch. There are two folds (dewlaps) from the sides of the lower jaw, gradually disappearing at the first half of the neck. When the head is carried low, there is a fold that descends from the outer corner of the eye over the cheek in its hind edge. This fold ends in a tuft of hair.

Skin pigmentation varies according to the coat markings color.

Coat color must correspond with the color of the external mucous membranes.

(A dog with a Disqualification must not be considered for placement in a conformation event, and must be reported to UKC.)
Unilateral or bilateral cryptorchid.
Viciousness or extreme shyness.
Overshot bite.
Undershot bite.
Wall eye.
Any nose pigment other than stated above.
Total depigmentation of the nose.
Black pigmentation of the skin or mucous membranes.
Tri-color coat.
Tan markings.
Any black coat coloring.
Albinism. 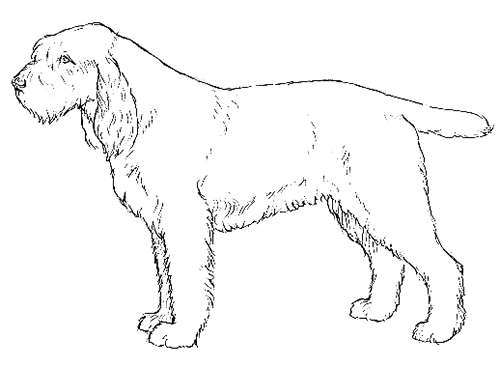