The Spanish Mastiff has long been used to guard the Merino livestock as they are moved from one pasture to another. In ancient times he often accompanied them on his own, without guidance from a shepherd. Today, the breed is also useful as a protector of farm and family.

The Spanish Mastiff was recognized by the United Kennel Club July 1, 2006.

The Spanish Mastiff is a dog of great size, compact and powerful. He has a massive head, a semi-long coat, and a balanced and harmonious build which allows him to be extremely functional.

Very intelligent, kind and noble. Determined and very sure of himself when protecting flocks, farm or master from dangerous predators.

The head is big and strong, shaped like a truncated pyramid, with a broad base. The skull and muzzle must blend together imperceptibly.

At least as broad as it is long, slightly arched in profile, with a prominent occiput and a slight stop.

Not quite as long as the skull, broad in its entire length, tapering only slightly to the tip. The upper lip largely covers the lower lip. The mucous membranes are black.

Disqualification: Mucous membranes any color other than solid black.

The Spanish Mastiff has a complete set of evenly spaced, white teeth meeting in a scissors bite.

Disqualification: Nose any color other than solid black.

Small, almond shaped, and dark hazel in color. The expression is attentive, noble, soft and intelligent, but turns very hard when the dog is confronted by a stranger.

Medium sized, triangular in shape, hanging flat. Set above the line of the eye. At attention, the ears raise up at the base. They must not be cropped.

The shoulder blades and upper arms are long and muscular and meet at an angle of approximately 100 degrees.

The legs are straight, with strong bone. The elbows are held close to the chest. The pasterns are strongly boned and slightly sloping.

The body is rectangular, stocky and robust, yet supple and agile. The chest is broad and deep, with a well developed forechest. The ribs are rounded. The withers are well marked, and the topline is straight and level, both standing and when the dog is in motion. The loin is long, broad and powerful, and the croup is broad and sloping at an angle of 45 degrees off the horizontal. There is a slight tuck-up.

The angle of the pelvis and femur matches that of the forequarter.

The thighs are solid and muscular, and the stifle and hock are moderately angulated. The rear pastern has a clearly visible Achilles tendon.

Set moderately low, thick at the base, long enough to reach the hock, and covered with hair that is longer than that on the rest of the body. When the dog is alert or moving, the tail will be raised in saber fashion, sometimes with a curve in the tip, but it is never carried curled over the back.

Of medium length, dense, thick and smooth. The hair is shorter on the legs and longest and silkiest on the tail.

Immaterial, though those often seen are self colors of yellow, fawn red or black; wolf or deer colored; brindle or parti-colored or solid colored with a white collar.

Males should be over 31.5 inches at the withers; females over 29.5. When all else is equal, the greater size is to be favored.

Harmonious and powerful, without rolling or ambling. 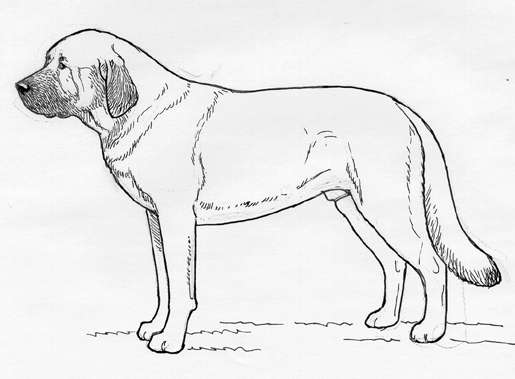