The Spanish Hound was described in the 14th Century by King Alphonse XI. He is generally used for hunting small game, but is not adverse to hunting large game and is an excellent blood tracker for large game.

The Spanish Hound was recognized by the United Kennel Club January 1, 1996.

The head is long, in proportion with the rest of the body. The skull and muzzle are of equal length.

The skull is medium in width, with a convex profile. Its width should be equal to its length. From the front, the skull is domed. The stop is a gentle slope.

The muzzle is moderately rectangular when seen from above, narrowing in width slightly towards the nose. It is never pointed. The upper lips are loose and abundant, well covering the lower jaw. The lips must be the same color as the nose.

The Spanish Hound has a complete set of evenly spaced, white teeth meeting in a scissors bite.

Large and moist, from light to intense black.

The eyes are medium in size, almond in shape, and dark in color. They have a sad, noble, intelligent expression. The eyelids match the nose in pigment and fit tightly.
Fault: Loose eyelids.
Serious Faults: Entropion or ectropion.

The ears are large, long and hanging. They are soft in texture and hang freely, twisted in a corkscrew. They must reach well beyond the nose.

Broad, strong and muscular, with thick, loose skin that forms a dewlap.

The shoulder blades and upper arms are approximately the same length and meet at an angle of nearly 100 degrees.

The legs are straight and parallel. They give the impression of being short. The bone is strong and the muscles and tendons are clearly visible. The elbows are very close to the body. The pasterns are strong, powerful and slightly oblique.

The body is clearly rectangular. The chest is very developed, with a prominent point of sternum. The ribs are rounded. The topline is straight with a slight dip behind the withers and a slight arch over the loin. Not a saddle or sagging back. The back is long and broad. The loin is very broad and powerful and only slightly raised. The croup is broad and fairly horizontal. The rump should be the same height as, or slightly lower than, the withers. In young dogs the rump is sometimes higher than the withers. The flanks are deep, and the belly is not tucked up.

Fault: Weakness in the back which causes swaying when the dog is walking.
Serious Fault: Sway back.

The hindquarters are powerful and muscular, with excellent angulation. They give the dog the necessary strength, stamina and agility to follow a trail over very rough terrain. The angulation of the pelvis and femur is 100 degrees.

The upper thigh is strong and muscular. The angle at the stifle is 115 degrees. The hock is well marked, with the tendon clearly visible. The angle of the hock is 120 degrees.

Set at medium height, and thick at the root. The tail is covered with short hair that forms a small paint brush at the tip. At rest the tail is carried down and curved between the hocks. In action it is raised in saber fashion and has a continual lateral movement. The tail is never straight, vertical or curled over and resting on the rump.

The coat is dense, short, flat and smooth. The skin is thick and loose all over the body, sometimes forming wrinkles on the forehead when the head is lowered.

White and orange, distributed in irregular markings. No ticking. The orange color may range from lemon to dark russet brown.

Disqualifications: Tri-colored dogs, or dogs with tan markings on the muzzle or legs.

The female Spanish Hounds are considerably smaller and finer than the males. Height for males is from 20.5 to 22.5 inches at the withers. For females, it is 19 to 21 inches.

At a trot the gait is long, sustained and economical.

(A dog with a Disqualification must not be considered for placement in a conformation event, and must be reported to UKC.)
Unilateral or bilateral cryptorchid.
Viciousness or extreme shyness. 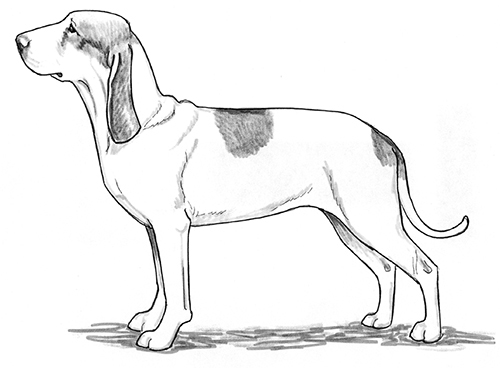