The history of the South Russian Shepherd Dog is shrouded in antiquity. There are many variations in the descriptions of their origin that are available. One thing seems certain; this is a native Russian breed, directly descended from the wolf, with additions of local shepherd dogs and sighthounds. They were used as flock herders and guardians in the Russian steppes.

The South Russian Shepherd Dog is a dog of above average size and robust constitution, with a thick, dense, double coat. The breed is lean, but with massive bone structure and strongly developed musculature. Secondary sex characteristics are strongly marked, with the males being stronger, more massive and more courageous than the females.

Fierce, distrustful of strangers, and dominant in character, the South Russian Shepherd Dog is capable of adjusting to a wide variety of climatic conditions and temperatures.

The head is elongated in shape, with a moderately broad forehead. In basic shape, it is similar to the wolf.

The occipital crest and zygomatic arches are strongly developed. The stop is barely visible.

The muzzle is approximately the same length as the skull, with a straight nasal bone and tight lips that are black and fully pigmented.

The South Russian Shepherd Dog has a complete set of evenly spaced, white teeth meeting in a scissors bite.

Faults: Small teeth, lack of premolars.
Serious Fault: Any bite other than scissors.

The nose is large and black.

The eyes are oval in shape, with dark, tight rims. They are set horizontally, and are dark in color.

The ears are relatively small, triangular in shape, and hang close to the head.

Fault: Ears that lift away from the head.

The neck is moderately long, lean, muscular, and set high.

The angle formed by the shoulder blade and the upper arm is approximately 100 degrees.

The forelegs are straight, parallel and relatively long. The pasterns are wide, long and slightly slanting.

The body is slightly longer than tall. The chest is deep, reasonably broad and slightly flattened. The withers are apparent but not high. The back is straight and strong. The loin is short, broad and slightly arched. The belly is moderately tucked up.

Faults: Square in shape or excessively elongated. Weak or roach back. Chest not let down to elbow. Excessive tuck up or sagging flank.

The hindquarters are powerful, wide set, parallel and well angulated.

The upper thigh is well muscled. The stifle is well angulated. The hock joint is clean cut and angular. The rear pastern is strong and long.

The feet are oval in shape, strong, well arched, and covered with long hair.

The tail falls at rest, reaching to the hock. It has a slight upward curve at the end.

The coat is long, coarse, thick and dense, with a well developed undercoat. It is of equal length on the head, legs, chest and tail.

Serious Faults: Black, brown or any color not specifically stated in the standard. Strong speckling.

The natural gaits of this breed are the heavy trot and the gallop. The gaits are free and extended. At a trot, the legs move in a straight line and tend to converge toward a center line. 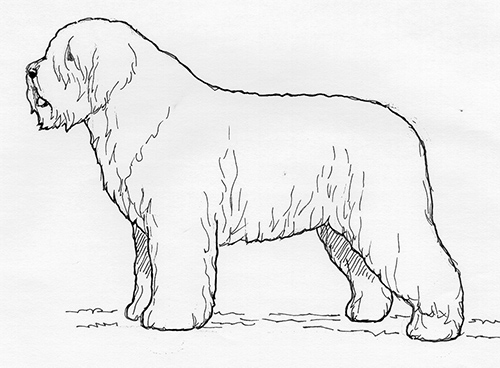