The Soft-Coated Wheaten Terrier is an old breed, probably of over 200 years. It is one of the terriers of Ireland and most likely shares common ancestors with the Kerry Blue and Irish Terriers. As with many terriers, it was a dog of the common, working people and had to earn its keep. It was used to hunt otter and badger and as a guardian against intruders. As old as the breed is, it did not receive recognition as a separate breed until 1937.

The Soft-Coated Wheaten Terrier was recognized by the United Kennel Club in 1978.

The Soft-Coated Wheaten Terrier is a medium size, well balanced, short-coupled dog with a distinctive single, flowing wheaten colored coat. He gives the appearance of a hardy, active terrier, neither leggy nor too low to the ground.

The Wheaten is an even-tempered, intelligent, friendly dog. He is spirited and game, willing to defend but not aggressive. He does not exhibit the sharpness of temperament that is sought in some of the other terrier breeds.

The well-balanced, long head is rectangular in appearance. It is powerful, with no suggestion of coarseness, and in proportion to the body. The skull and foreface are equal in length. The stop is defined.

Flat between the ears and not too wide.

The strong, powerful muzzle is well-filled-in below the eyes; the cheekbones are not prominent. The lips are tight and black. There is no suggestion of snipiness.

A full complement of strong, large, white teeth meet in a scissors or level bite.

Medium in size, set well apart and not prominent. Dark brown or hazel in color. Expression is alert and self-confident.

The nose is large for the size of the dog and black in color.

Serious Fault: Any nose color other than black.

Ears are small to medium in size. They break level with the skull, dropping slightly forward. The inside edge of the ear lies next to the cheek, pointing to the ground rather than to the eye.

The shoulder blades are well laid back and cleanly muscled.

The body is strong and short coupled, with a deep chest and well-sprung, but not barrel-shaped, ribs. The back is short and broad, loin is short and powerful, and the topline is level. The Soft-Coated Wheaton Terrier gives the impression of being square in proportion.

The hindquarters are well muscled.

The hind legs are well developed with powerful muscles. The stifles are well bent; turning neither in nor out. The hocks are well let down. When viewed from behind, the rear pasterns are parallel to each other. Dewclaws should be removed.

Small and compact. Dark nails are preferred but other colors are acceptable.

Set on high and not too thick, generally docked to two-thirds of its original length.

The Soft-Coated Wheaten Terrier coat is a distinguishing characteristic of the breed, one that sets it apart from all other Terriers. An abundant single coat covers the entire body, including the legs and head. The coat on the head falls forward, shading the eyes. There may be evidence of undercoat on the ears, but never on any other part of the body.

The soft, silky coat has a gentle wave. In both the puppies (under one year of age) and adolescents (under two years of age), the mature soft, wavy coat is generally not yet evident.

Serious Faults: Any of the following coat textures in a mature dog: Woolly, harsh, crisp, cottony, curly, stand away. In addition, a straight coat in adults.

The properly presented Wheaten shows the neat Terrier outline, but the coat must be long enough to flow when the dog is in motion. The coat must never be clipped or plucked. Any sharp contrasts or stylizations are discouraged. Any dog that is overly trimmed or sculpted is to be removed from consideration for class placement.

The coat on the head is blended to present a rectangular outline. The eyes should be obvious, but not fully exposed. Ear fringe should be removed, but not down to the ear leather. Sufficient coat must remain on the skull, cheeks, neck and tail to balance the proper length of body coat.

Any shade of clear wheaten is acceptable, from pale to golden red. (Occasional red, white or black guard hairs may be found on close examination). Puppies frequently have a red or gray cast, a black mask, and black tipping on the body coat. These markings clear with age.

Height at the withers for males is between 18 and 19 inches, for females, somewhat less. Males 40-45 pounds; females proportionally less.

Typical gait is free, graceful and lively, accompanied by good reach in the front and a strong drive behind. Leg action is straight in front and rear and the elbows are held neatly to the body.

(An Eliminating Fault is a Fault serious enough that it eliminates the dog from obtaining any awards in a conformation event.)
White or brown color.

(A dog with a Disqualification must not be considered for placement in a conformation event, and must be reported to UKC.)
Unilateral or bilateral cryptorchid.
Viciousness or extreme shyness.
Yellow eyes.
Albinism. 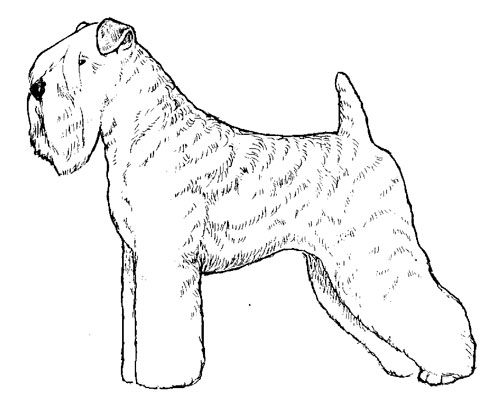 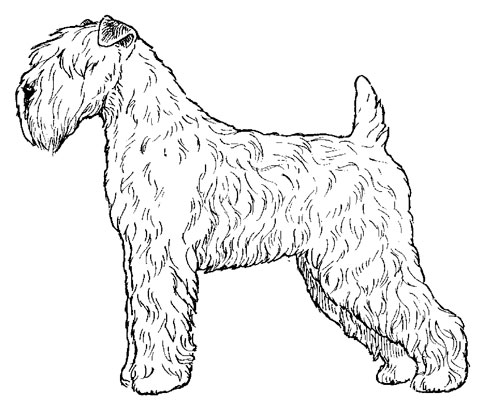