At the turn of the century, the system of hunting in enclosed hunting grounds was introduced to Switzerland. The larger, popular Swiss Hounds were too fast for this sort of hunting, so it was decided to replace them with smaller, shorter legged scenthounds. The new, smaller breed was developed through controlled and selective breeding. They are low on leg and come in attractive colors that are similar to the medium sized Swiss Hounds.

The Small Swiss Hound was recognized by the United Kennel Club in 2006.

Smaller and much more rectangular in proportion than the Swiss Hound, the Small Swiss Hound has a noble head and a friendly, alert expression.

Untiring and keen with a sensitive nose. Friendly, calm to lively.

The head is rather long and slender, gradually widening towards the eyes.

The skull is lightly arched and free of wrinkle or furrow. The stop is moderately developed.

The muzzle is strong, fairly long, and never pointed. The nasal bridge is straight or slightly convex, and lies in a plane that is parallel to the line of the skull. The cheeks are only slightly developed. The upper lips are moderately overlapping.

The Small Swiss Hound has a complete set of evenly spaced, white teeth meeting in a scissors bite. The absence of up to two small premolars is tolerated.

Disqualifications: Undershot, overshot or wry mouth. Absence of incisors or canines. Absence of more than three premolars or molars.

The ears are long, set on low, pendulous, and carried folded and close to the cheeks.

Moderately long, light, elegant yet well muscled. There is some loose skin under the throat, but a dewlap is not desirable.

The forequarters are strongly muscled, yet not loaded. The shoulders and upper arms are sloping and meet at a right angle.

The legs are quite straight, with strong bone and elbows placed against the body. The forearms are about the same length as the upper arms. The pasterns are short and never turned out. They are slightly sloping.

The body is moderately long. The chest is broad and deep, at least to the elbow. The point of the sternum is visible but not too prominent. The ribs are long, moderately rounded and reach well back. The back is straight and firm. The loin is broad, strong and supple, and the croup is slightly sloping. The underline is slightly tucked up towards the hindquarters.

The thighs are of good length and width. The stifle is well bent, and the hock is well angulated and set low.

Set on low in continuation of the croup. Medium long, reaching at least to the hock, and ending in an elegant point. Well covered with hair, but no plume. Carried slightly upwards but never tilted over the back.

There are two coat varieties, which are all shown together at United Kennel Club conformation events.

There are four color varieties, which are all shown together at United Kennel Club conformation events

This variety is bred with a smooth and a rough coat. Always tricolor: white, black and tan. Basic colour white with large black patches. A few black mottles permitted. Tan markings (“Brand”) above eyes, on cheeks, on inside and upper part of leathers and round the vent. Black mantle permitted. Skin: Black under black coat, slightly black-and-white marbled under white coat.

Fault: too much black ticking.

This variety is usually smooth haired, seldom shows a “double coat” (Stockhaar). Preferably deep black with tan markings (“Brand”) above eyes, on cheeks, on chest and/or on legs. Or alternatively tan with black mantle or saddle. White patch on chest, not too large, tolerated. Skin: black under black coat, lighter under tan markings.

This variety is smooth-haired. Basic colour white, densely grey-white, or black-white speckled (giving a “blue” impression), with large dark or black patches. Tan markings (“Brand”) above eyes, on cheeks, on the inside and upper part of leathers and round the vent. Black mantle permitted. Skin: black under black coat, lighter under blue speckling.

Faults: Too many orange ticks in the white. Black overlay (“soot”) at leathers, set-on of tail and/or in orange patches.
Disqualification: Any color not described in the standard.

(An Eliminating Fault is a Fault serious enough that it eliminates the dog from obtaining any awards in a conformation event.)
More than one inch over or under the standard.

(A dog with a Disqualification must not be considered for placement in a conformation event, and must be reported to UKC.)
Unilateral or bilateral cryptorchid.
Viciousness or extreme shyness.
Albinism.
Undershot, overshot or wry mouth.
Absence of incisors or canines.
Absence of more than three premolars or molars.
Nose pink without pigmentation.
Entropion or ectropion.
Any color not described in the standard. 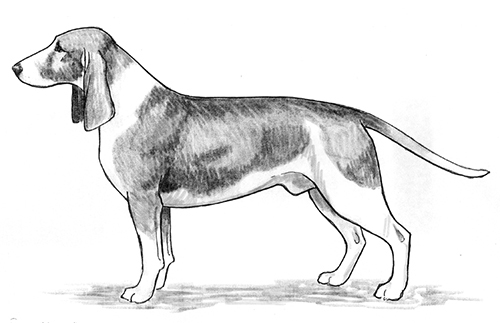