The Smaland Hound originated in Sweden. It is a combination of scenthounds from Germany and Poland, mixed with English hounds and local spitz type dogs. As recently as the 1950’s new blood has been added to the breed by recognizing dogs that were of similar type but unknown pedigree.

The Smaland Hound was recognized by the United Kennel Club in 2006.

Robust and strong, somewhat elegant, with a harsh coat.

Calm and kind with a faithful and keen temperament.

The skull is lean and of medium width. It is broadest between the ears. The stop is well defined.

The muzzle is the same length as the skull. It is well developed. The nasal bridge is straight and parallel to the top of the skull. The cheeks are lean. The upper lips only slightly overhang the lower.

The Smaland Hound has a complete set of evenly spaced, white teeth meeting in a scissors bite.

The black nose has large nostrils.

The dark brown eyes have a calm expression.

Set fairly high and hanging flat, the ears are slightly raised when the dog is attentive, and are rounded at the tips. They should reach only half way along the muzzle when pulled forward.

Moderately long, powerful and clean, the neck fits smoothly into the shoulders.

The shoulder blades and upper arms are long, and form a right angle.

The elbows set close to the body. The legs are straight and parallel, with strong bone. The pasterns are springy and slightly sloping.

The body is square in proportion. The chest is well developed, and the ribs are well sprung. The withers are well defined, and the back is short and powerful. The loin is muscular and slightly arched, and the croup is broad and slightly sloping. The belly is only slightly tucked up.

The hindquarters are strong, and the legs are parallel when viewed from behind.

The thighs are broad, and the stifle and hock joints are well angulated. The rear pasterns are short, lean and straight.

The feet are firm, with well knuckled, tight toes.

Long, set on a straight line with the back, and carried straight or slightly curved; half length; natural bob. Full or half length tails are preferably carried below the line of the back.

Medium length, harsh and close fitting, with a well developed undercoat. Under the tail and on the backs of the thighs the hair may be slightly longer.

Black and tan, with or without small white markings on the chest and toes.

(An Eliminating Fault is a Fault serious enough that it eliminates the dog from obtaining any awards in a conformation event.)
Height that is more than one inch over or under the standard. 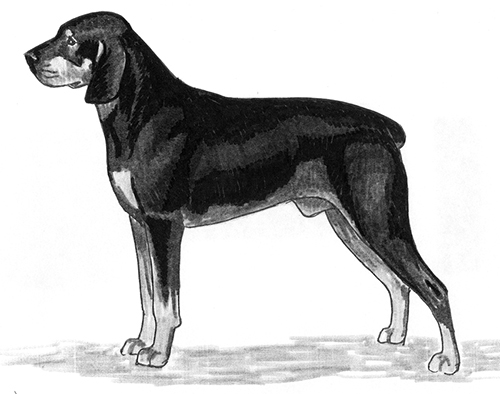