The Sloughi is an ancient sighthound breed, developed in North Africa (in the area including Morocco, Algeria, Tunisia and Libya) to hunt game such as desert hare, desert fox, jackal, gazelle, ostrich, wild boar, and hyena.

The first Sloughis arrived in Europe at the end of the 19th century and, in 1935, the breed was officially recognized by the Fédération Cynologique Internationale. Sloughi breeding has expanded greatly in the last 50 years in Europe following interruptions by both World Wars.

The Sloughi was recognized by the UKC in 1995.

The Sloughi is a medium-sized, short-haired, smooth-coated Sighthound which appears feather-light and athletic when moving. The Sloughi’s head is a long wedge-shape, with relatively small drop ears. The body shows defined bony structure and strong, lean muscles. The body has a nearly straight topline from the base of the neck to the loin, where it arches very slightly and blends into a bony, gently sloping croup. The underline of the Sloughi is evenly curved, the brisket is deep but does not reach the elbow. The long sternum curves evenly into the well-tucked-up belly and flank. The tail is long and carried low, with an upward curve at the end. The attitude is noble and somewhat aloof, and the expression of the dark eyes is gentle and melancholy.

Males are typically larger than females.

In North Africa, the Sloughi was and is treasured for its hunting skills, speed, agility and endurance over long distances. It is a robust, but elegant and racy, pursuit dog with no exaggeration of length of body or limbs, muscle development, nor curve of loin.

The Sloughi is an intelligent and very driven hunter which chases on sight what it considers moving prey, but also relies on olfactory and acoustic cues in the chase.

In Africa the Sloughi is a working dog, primarily used for hunting. The Sloughi is typically loyal, playful and affectionate with family and cautious and watchful with strangers.

The Sloughi does not respond well to harsh training, but benefits from a firm, consistent, fair and praising hand.

In profile the head is long and refined, but deeper and sturdier than in many other Sighthounds. Seen from above, it has the shape of a long wedge, the skull being the widest part, tapering to the tip of the nose.

Seen from the side, the top part of the skull is flat. The skull is rather broad, measuring approximately 4-6 inches between the ears. The skull is distinctly rounded at the back, and curves harmoniously on the sides. The brows are scarcely projecting, the frontal groove is hardly marked, the stop is barely pronounced, and the occipital crest is barely visible.

Faults: Skull too heavy and broad, too narrow, brows and stop too visible or insufficiently pronounced.

The muzzle has the shape of an elongated and moderately refined wedge and is roughly as long as the skull. The bridge of the nose is straight from its root. The nose leather, not being supported by the skeletal structure, bends slightly forward. The lips are thin and supple, just covering the lower jaw. The corner of the mouth is very slightly visible.

Faults: Muzzle too short, too long, too wide, lips too strong and thick, corner of the mouth drooping.
Very Serious Fault: Unpigmented areas on lips.

Black and strong, not pinched.

Faults: Any color other than black.
Very Serious Fault: Unpigmented areas on nose.

Large, dark, well set in their sockets, oval to almond-shaped. The expression is gentle, slightly sad, and melancholy. The eye color is shades of dark brown to dark amber. The eye rims are pigmented.

The ears of the Sloughi are set high and droop close to the head when the animal is at rest. The ears are of medium size, triangular in shape, and slightly rounded at the tips.

Very Serious Faults: Ears too long, tips hanging clearly below the lower jaw.
Disqualifications: Ears erect or with tips drooping forward, or small and folding backwards in a “rose ear”.

The neck is long and springs well up from the shoulders. It is slightly arched at the crest. The skin is fine, tight, with no dewlap and the hair is very smooth.

Faults: Neck too short and thick, or too long and thin, dewlap.

The shoulder blades are long and oblique, and the upper arms are strong.

The forelegs are straight, bony and muscular. The pasterns are slightly sloping, supple and strong. The forelegs appear long.

The withers are apparent. The back is short, almost horizontal. The loin is short, lean, wide and slightly arched. The croup is bony and oblique, with apparent hip bones that are the same height as, or slightly higher than, the withers.

The chest is not too wide. In depth, it hardly reaches the level of the elbow. The ribs are flat, close fitting to a long, straight sternum. The underline first starts as a straight line (sternum), then rises up smoothly to a well tucked up belly. The ratio between the depth of chest and the height at the withers is 4:10.

Faults: Croup too long, not bony enough, too round; top line not horizontal, saddle-back, rounded back, back too long, chest not deep enough, too narrow or too wide, chest reaching below the elbow, round ribs (barrel chest), not enough tuck, abrupt underline.

Very Serious Faults: A dog whose body is clearly longer than high, or whose hip bones are clearly lower than the withers, lacks breed type and should not be considered for champion points. When showing, the hind legs should be left in their natural position so that the horizontal topline remains apparent.

Faults: Bulging round muscles, not enough or too much angulation, legs not parallel to each other, toes turned in or out.

The feet are lean and have the shape of an elongated oval. In many lightly-built Sloughis, the foot is shaped like a hare-foot. The nails are black or just pigmented.

Faults: Feet flat, toes not tight, toes turned in or out.

The tail is long, thin and set in line with the croup, carried low with a typical upward curve at the tip when in the resting position. The tail should be long enough to reach the point of the hocks. Normally, the tail should be carried below the horizontal line of the back. When excited, the upward-curved part of a Sloughi’s tail may rise above that horizontal line.

Faults: Tail too short, coarse, with too much hair and too thick, badly carried.

The coat of the Sloughi is always smooth. It is short, tight, and fine all over the body. The Sloughi is presented in natural condition, and any tampering with its looks should be strongly discouraged.
Faults: Coat hard and coarse.

Disqualifications: Coat too long, and feathering on the tail and/or legs.

The coat colors of the Sloughi are all shades of light sand (cream) to mahogany red fawn, with or without black markings such as brindling, black mask, black ears, dark overlay and black mantle, with no invasive white markings.

Faults: Large white patch on the chest. Small to medium white marks on the chest or toes are allowed.
Disqualifications: Color not in accordance with the standard. Extensive white markings such as parti-color, white socks and white blaze.

Height at the withers for males is 26-29 inches. For females, it is 24-27 inches. Dietary factors have led to taller Sloughis in Europe and America, and moderately taller Sloughis should not be disqualified.

The Sloughi has a feather-light, floating and effortless gait, tail held low, head at a moderate angle to the body. The gait is supple and smooth, and covers plenty of ground with stride lengths that are consistent with the breed’s proper proportions and angulation.

(A dog with a Disqualification must not be considered for placement in a conformation event, and must be reported to UKC.)
Unilateral or bilateral cryptorchid.
Viciousness or extreme shyness.
Overshot or undershot.
Ears erect or with tips drooping forward, or small and folding backwards in a “rose ear”.
Coat too long, and feathering on the tail and/or legs.
Color not in accordance with the standard.
Extensive white markings such as parti-color, white socks and white blaze.
Albinism. 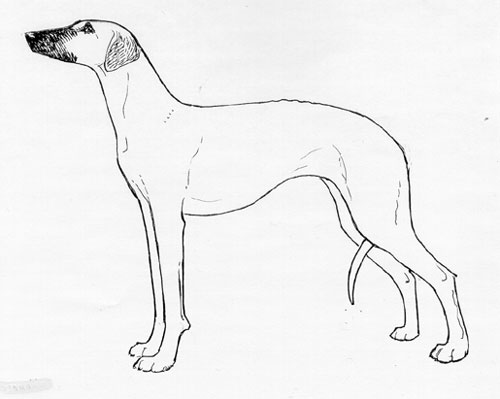