The Chukchi Indians, natives to the Soviet Arctic, developed the Siberian “Chukchi” (later changed to “Husky”), approximately 3,000 years ago. They needed a small sledding dog to haul small loads long distances. The dogs, brought by the Indians, eventually made their way across the Bering Straits to Alaska, and then to Canada and the United States. As a result of their use and close proximity to people, Siberian Huskies are known for their speed, endurance and good temperament.

The Siberian Husky was recognized by the United Kennel Club as the “Arctic Husky” in 1938. The breed name was changed to Siberian Husky in March of 1991.

The Siberian Husky is a medium-sized, well-balanced working dog, with moderate bone, ease and freedom of movement and a good disposition. Their moderately compact, well-furred body, erect ears and brush tail indicate the breed’s Northern heritage.

The working characteristics of the breed have been maintained, ensuring that it is able to pull a light load, in harness, at a moderate speed over great distances. The basic balance of power, speed and endurance is reflected in his proportions and form. A dog in proper condition, with firm, well-developed muscles, does not carry excess weight. They never appear so heavy as to suggest a freighting animal nor so light as to suggest a sprint-racing animal. Males are masculine, but never coarse. Females are feminine, but not weak.

In addition to the noted faults, any obvious structural faults common to all breeds are as undesirable in the Siberian Husky as in any other breed.

The Siberian Husky is characteristically friendly and gentle, while also being alert and outgoing. The mature dog may display some measure of reserve and dignity. The breed is not possessive, overly suspicious of strangers, nor aggressive with other dogs. Their intelligence, tractability and eager disposition make them agreeable companions and willing workers.

The medium-size head is in proportion to the size of the body.

The skull is slightly rounded on the top, and tapers gradually from the widest point to the eyes. The stop is well defined.

Faults: Clumsy or heavy head. Head too finely chiseled. Muzzle too snipey, too coarse, too short or too long. Insufficient stop.

Faults: Any bite other than scissors.

The almond-shaped eyes are moderately spaced and set a trifle obliquely. Their keen, but friendly, expression shows interest and even mischievousness. Eye color may be brown or blue; one eye of each color and parti-colored eyes are acceptable.

Faults: Set too obliquely. Set too close together.

Various colored noses are acceptable. They may be black in black, gray or tan dogs; liver-colored in copper dogs; and flesh colored in pure white dogs. The snow nose, which is pink streaked, is also acceptable.

The medium-sized, triangular-shaped ears are close fitting and set high on the head. They are thick, well furred and slightly arched at the back. They are strongly erect, with the slightly rounded tips pointing straight up.

Faults: Too large in proportion to the size of the head. Too wide set. Not strongly erect.

Faults: Too short and thick. Too long.

The moderately spaced forelegs are parallel and straight when viewed from the front. Bone is substantial, but never heavy. The elbows are close to the body, turning neither in nor out. In profile, the pasterns are slightly slanted. The wrist is strong, but flexible.

The length of the leg, from the elbow to the ground, is slightly more than the distance measured from the top of the withers to the elbow. Dewclaws on the forelegs may be removed.

Faults: Weak pasterns. Bone too heavy. Too narrow or too wide in the front. Out at the elbows.

The topline is level. The medium length back is straight and strong. The taut, lean loin is narrower than the rib cage, with a slight tuck-up. The sloping croup is never so steep as to restrict the rearward thrust of the hind legs.

The deep, strong chest is not too broad. The deepest point is just behind and level with the elbows. The ribs are well sprung from the spine, and flatten on the sides to allow freedom of action.

Faults: Weak or slack back. Roach back. Sloping topline. Chest too broad. Barrel ribs. Too flat or weak ribs.

The moderately spaced legs are parallel when viewed from the rear. The well-muscled upper thighs are powerful. The stifles are well bent. The well-defined hock is set low to the ground. Any dewclaws on the hind legs are removed.

Faults: Straight stifles. Cowhocks. Rear too wide or too narrow.

The oval-shaped feet are not too long. The compact, medium-size paws are well furred between the toes and the tough, thickly-cushioned pads. At a natural stance, the paws turn neither in nor out.

Faults: Soft or splayed toes. Too large and clumsy paws. Too small and delicate paws.

The well-furred tail is of fox brush shape. It is set on just below the level of the topline, and is carried in a graceful sickle curve over the back when the dog is at attention. It is not curled to either side of the body. When the dog is in repose, the tail may trail.

The medium-length hair is approximately the same length on the top, sides, and bottom of the tail, giving the appearance of a round brush.

Faults: Snapped or tightly curled. Highly plumed. Set too low or too high.

The breed is double coated, the hair being medium length, giving a well-furred appearance. The outer coat guard hairs are straight and somewhat smooth lying. The soft, dense undercoat is of sufficient length to support the outer coat. The absence of an undercoat during shedding season is normal and not to be penalized. It is permissible to trim the whiskers and the fur between the toes, but the trimming of the fur on any other part of the dog is to be severely penalized.

Faults: Long, rough or shaggy coat. Too harsh or too silky in texture. Guard hairs standing straight off from the body. Hair so long as to obscure the clean-cut outline of the dog.

All colors, from black to pure white, are allowed. A variety of markings on the head is common, including many striking patterns not found in other breeds.

Height is measured at the withers. Height ranges are as follows: Males, 21 inches up to, and including, 23½ inches; females, 20 inches up to, and including, 22 inches. Weight is to be in proportion to height. The following weight parameters (as well as the height parameters above) present the extreme limits. No preference is to be given to either extreme. Weight ranges are as follow: Males, 45 to 60 pounds; females, 35 to 50 pounds.

The characteristic gait is smooth and seemingly effortless. They are quick and light on their feet. While gaiting, the topline remains firm and level. The good reach of the forequarters and the good drive of the hindquarters are best viewed at a moderately fast trot. As speed increases, the dog single tracks. The forelegs and hind legs are carried straight forward, with neither the elbows nor stifles turning in or out. Each hind leg moves in the path of its corresponding foreleg. 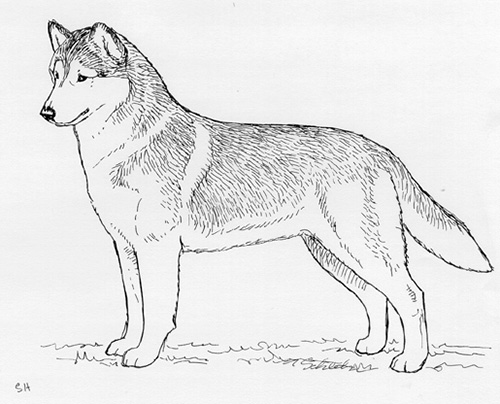