The Shikoku is descended from the medium sized dogs of ancient Japan. It was developed as a hunting dog, mainly used on boar in the mountainous regions of Kochi. There were originally three varieties of this breed, each named for the area in which it was bred.

The Shikoku was recognized by the United Kennel Club in 2006.

The Shikoku is a medium sized dog, well balanced and with well developed, clean cut muscles. It has prick ears, a curled or sickle tail, and a sesame colored coat. It is a strong, well-boned and compact breed.

An enthusiastic hunter with marked endurance, the Shikoku is energetic and alert, yet docile with his master.

Broad in forehead. The stop is shallow but defined.

Rather long and wedge shaped, with a straight nasal bone.

The Shikoku has a complete set of evenly spaced, white teeth meeting in a scissors bite.

The shoulders are moderately sloping with strong muscles.

The legs are straight and clean cut. The elbows set close to the body, and the pasterns are slightly sloping.

In proportion, the body is just slightly longer than tall in a ratio of 11:10. The chest is deep, and the ribs are well sprung. The withers are high, and the back is straight and strong. The loin is broad and muscular, and the belly is well tucked up.

The hindquarters are powerful, with well developed muscles.

The hocks are moderately angulated and very tough.

Tightly closed, with well arched toes and hard, elastic pads. The nails are hard and dark in color.

Thick, set on high and carried curled over the back or like a sickle. The tip nearly reaches the hock when let down.

Double, with a harsh, straight outer coat and a soft, dense undercoat. The hair on the tail is rather long.

Height at the withers for males is 20.5 inches. For females, it is 18 inches. There is a tolerance of one inch in either direction.

Light and quick, with rather narrow strides.

(A dog with a Disqualification must not be considered for placement in a conformation event, and must be reported to UKC.)
Unilateral or bilateral cryptorchid.
Viciousness or extreme shyness.
Albinism.
Extremely overshot or undershot bite.
Ears not pricked.
Tail hanging or too short. 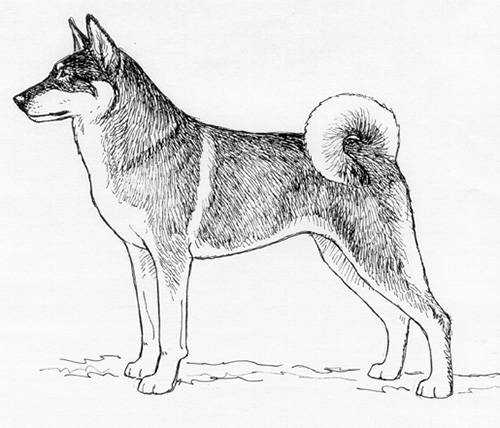