The history of this little dog is clouded by time and folklore, but it is thought that the Shih Tzu originated in Tibet. It resembles the Tibetan Spaniel, Lhasa Apso and Pekingese, which also originated in this area of the world. The Shih Tzu were considered so valuable that they were often given as gifts to the Chinese Court. In the early 1930s, they were imported to England, and were brought to the United States about 1958.
The Shih Tzu was recognized by the United Kennel Club in 1966.

An overall well-balanced dog with no exaggerated features is the ideal. The breed is slightly longer than tall, length being measured from the withers to the root of the tail, and the height being measured from the withers to the ground. Regardless of size, the Shih Tzu is always compact and solid and carries good weight and substance. Carriage is distinctly arrogant, with the head well up and the tail carried over the back. The manner in which the coat grows on the head gives the breed a distinctly chrysanthemum-like appearance, while not affecting the dog’s ability to see.

Absolute soundness and proper muscle tone is a must. Head properties should remain free of exaggeration, and muzzle must be an adequate length so as to not compromise breathing and/or obstruct normal vision.

Any structural faults common to all breeds are also undesirable in the Shih Tzu, even though they are not mentioned in the standard. Any such faults are to be penalized to the extent of their deviation from the standard.

The round, broad head is wide between the eyes.

The skull is domed. There is a definite stop.

The square, unwrinkled muzzle is well cushioned, and fairly flat. Its ideal length, when measured from the tip of the nose to the stop, is one inch, although the length may vary in relation to the overall size of the dog. The bridge of the nose is straight or slightly upturned. The top of the nose should be on a line with, or slightly below, the bottom of the eye rim. The lower lip and chin do not protrude and never recede. Lip pigment is black except on liver-colored dogs, when it is liver, and on blue-pigmented dogs, when it is blue. The jaw is broad and wide.

A full complement of strong, white teeth meet in an undershot or even bite. Neither the teeth nor the tongue should show when the mouth is closed. A missing or slightly misaligned tooth is not to be severely penalized.

The large, round eyes are placed well apart, looking straight ahead. The eyes are not prominent. They are very dark in color, but may be lighter in liver and blue-pigmented dogs. Eye rim pigment is black, except on liver-colored dogs, when it is liver, and on blue-pigmented dogs, when it is blue. Expression is warm. An overall well balanced and pleasant expression supersedes the importance of any of the individual parts. A false image created by grooming techniques is to be severely penalized.

The large, heavily coated ears are set slightly below the crown of the skull.

The well-set-on neck flows smoothly into the shoulders. It is of sufficient length to permit a natural, high head carriage, and is in balance with the height and length of the dog.

The shoulders are firm, and well laid back.

The straight, well-boned, muscular forelegs are set well apart and under the chest. The elbows are close to the body. The pasterns are strong and perpendicular. Dewclaws may be removed from the forelegs.

The thighs are well-rounded and muscular.

The hind legs are short, and have ample bone. They are straight when viewed from the rear. The legs look massive due to the abundance of hair.

Round, firm and well padded, the feet appear large due to the amount of hair.

The heavily plumed tall is set on high and carried in a curve well over the back. The height of the tail should be approximately the same as the height of the skull, to give a balanced appearance.

The breed is double coated. The luxurious, dense coat is long and flowing. A slight wave is permissible. Length or amount of coat should not affect movement or vision. The hair on the top of the head is customarily tied up.
The breed is to be shown in as natural a state as possible. Trimming is done on the feet and at the anus for neatness.

All colors and markings are acceptable and are to be given equal consideration.

Ideally not more than 10½ inches in height.
The ideal weight of mature dogs is from 9 to 16 pounds.

In order to evaluate its smooth, flowing, effortless, straight gait, the Shih Tzu is to be shown at its own natural speed; neither raced nor strung up. There is a good reach in the front and an equally strong rear drive. While gaiting, the topline is level, the head is carried naturally high and the tail is carried in a gentle curve over the back. 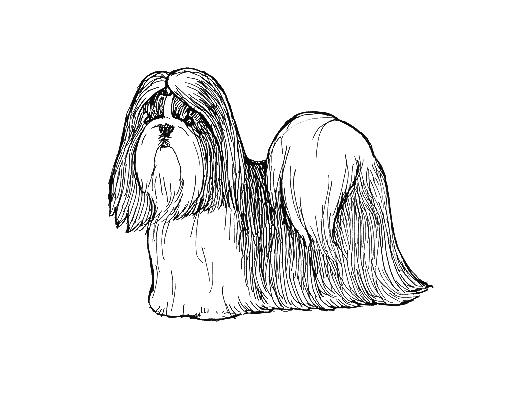