The Shiba is the smallest of the working Japanese Spitz breeds and was originally used as a hunting dog for small game and ground birds. Due to the importation and cross breeding of English pointing and setting dogs with the Shibas, the breed in its original form was nearly extinct following World War II. The preservation of the pure Shibas began around 1928, and the Japanese breed standard was unified in 1934. The Shiba is the number one companion dog in Japan. The first documented Shiba in the United States was in 1954.

The Shiba was recognized by the United Kennel Club in 1992.

The Shiba's frame is compact, with well-developed muscles. There is a distinct difference between males and females. The males have a masculine and robust body structure, while the females are more refined and feminine. The height to length ratio in males is 10 to 11. Females are slightly longer.

The Shiba has a good nature as well as a spirited boldness and feeling of alertness. They have keen, alert senses, and are agile and athletic, able to move quickly with nimble, elastic steps. They have an independent nature, and should not be faulted for being aloof towards strangers. While the Shiba can be aggressive towards other dogs, they should be under the control of their handler at all times.
Fault: Lack of proper temperament.

The skull size is in proportion to the body, with a broad, flat forehead, and a well defined stop that has a slight furrow rising above it. The cheeks are full.

The muzzle is firm, full and round. It tapers from the stop to the end of the nose, giving a fox-like appearance but does not taper so much as to become snipey. The bridge of the nose is straight. The lips are drawn tight, showing no looseness. Lip pigment is black.

Faults: Bulge in the bridge of the nose. Black spots on the tongue. Very shallow stop. Dewlap.

The eyes are somewhat triangular in shape. They slant upward toward the outside base of the ear. Iris color is dark brown. Eye rims are black.

The small, thick ears are triangular in shape and well covered with hair. They stand up firmly and lean forward slightly.

The neck is sturdy.

The well-developed shoulders have moderate angulation.

The forearms are straight. Dewclaws are optional.

Faults: Straight shoulders. Turning out at the elbows.

The chest is deep, the depth of which, measured from the withers to the sternum, is 45 to 50 percent of the total height of the dog, measured from the withers to the ground. The forechest is well developed. The ribs are moderately sprung. The back is straight and strong and the loin is broad and muscular. The topline is level to the set on of the tail. The belly is tucked up.

The angulation of the hindquarters is moderate to balance with the forequarters.

The upper thighs are long, and the lower thighs are short but well developed. The hock joint is strong and thick. No dewclaws.

The thick tail is set on high, and nearly long enough to reach the hock. It is carried either curled or curved in sickle fashion.

Disqualifications: Hanging (drop) tail. Tail too short to be carried over the back.

The breed is double coated. The outer coat is stiff and straight, about two inches in length over the withers, with the guard hairs standing off the body. The coat is short and even on the face, ears and legs. The undercoat is soft and thick. The tail hair is slightly longer and stands up. The Shiba is to be shown in a natural state with no trimming of the coat.

All acceptable colors must have Urajiro, which is cream to white ventral color in the following areas: on the sides of the muzzle, on the cheeks, inside the ears, on the underjaw and upper throat, inside of legs, on the abdomen, around the vent and the ventral side of the tail. White spots above the eyes are permitted on all colors but are not required. Undercoat is cream, buff or gray.
The acceptable colors are as follows.

Bright orange red, giving a fox like appearance. Clear red is preferred but some black tipping on the back and tail is acceptable.

A 50/50 mixture of black and red hairs fully intermingled together so that there is no area where the black color predominates. The sesame may end in a widow’s peak on the forehead, leaving the muzzle red.

The black is not jet black, but has a very slight brownish cast due to the color of the undercoat. The borderline between the black and tan areas is clearly defined. The distinct tan markings are found: as small spots above the eyes, on the sides of the muzzle and the cheeks, on the forechest, on the ends of the legs, and the underside of the tail. The tan areas lie between the black coat color and the white markings.

Clearly delineated white markings (in addition to Urajiro) are permitted in all colors, but not required, on the tip of the tail, as a blaze on the throat or chest, and as stockings on the front legs up to the elbows and on the back legs up to the stifle joint.

Disqualifications: Any color other than red, red sesame, or black and tan. Lack of Urajiro. Albinism.

The height is measured at the top of the shoulder blade. The acceptable height ranges are: males, 14½ to 16½ inches; females, 13½ to 15½ inches. The ideal heights are those closest to the center of the acceptable range for each sex.

(An Eliminating Fault is a Fault serious enough that it eliminates the dog from obtaining any awards in a conformation event.)
Height outside the allowed range.

(A dog with a Disqualification must not be considered for placement in a conformation event, and must be reported to UKC.)
Unilateral or bilateral cryptorchid.
Viciousness or extreme shyness.
Drop ears.
Ears that bend at the tip.
Undershot or overshot bites.
Hanging (drop) tail
Tail too short to be carried over the back.
Any color other than red, red sesame, black and tan.
Lack of Urajiro.
Albinism. 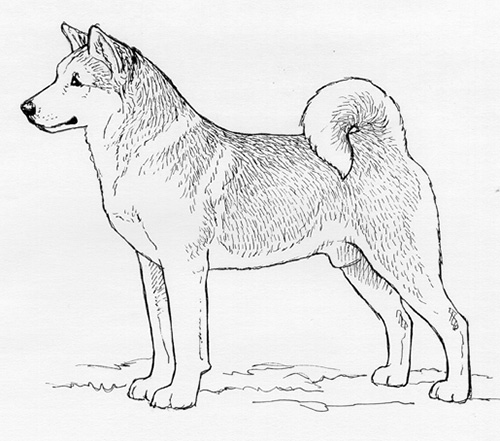