The Serbian Tricolor Hound has the same origins as the other Balkan scenthounds. It was originally considered a variety of the Serbian Hound, but was given its own breed status in 1946, though except for color the standards are nearly identical.

The Serbian Tricolor Hound was recognized by the United Kennel Club in 2006.

The head is long and narrow, with divergent planes.

The skull is slightly rounded and has a pronounced frontal furrow. It is longer than it is wide. The stop is almost imperceptible.

The muzzle is just slightly shorter than the skull. It tapers in width progressively from the eyes to the nose. The nasal bridge is straight. The cheeks are flat. The upper lip overhangs the lower lip. The edges of the lips should be black.

The Serbian Tricolor Hound has a complete set of evenly spaced, white teeth meeting in a scissors or level bite.

Disqualifications: Undershot. Overshot. Missing teeth other than the PM 1’s.

The black nose is well developed.

The medium size, oval shaped eyes are set slightly obliquely. The eyes and the eyerims are as dark as possible.

High set, thin and pendulous, the ears are rounded at the tips.

Approximately the same length as the head, strong and well arched.

The shoulder blades and upper arms are long and form an angle of approximately 90 degrees.

The elbows are close to the body. The legs are strong, with flat bone. The distance from the elbow to the ground is one half the height at the withers. The pasterns are slightly sloping.

The body is slightly longer than tall. The chest is deep and wide. The withers are slightly pronounced, and the back is long, strong and straight. The loin is muscular, and the croup is slightly sloping, broad and muscular. There is a slight tuck-up.

The hindquarters are strong, with flat musculature.

The upper and lower thighs are approximately the same length. The stifle angulation is 120 degrees. The hock is low and powerful, with angulation of 140 degrees. The rear pasterns are strong and nearly vertical.

The tail set follows the natural line of the croup. It is strong at the base and tapers to the tip, which reaches to the hock. The tail is carried in a slight curve below the line of the back. It is covered with abundant hair.

Short, thick, abundant and shiny, the coat may be slightly longer on the back of the thighs and the underside of the tail. There is a good undercoat.

Base coat of red, with a black mantle or saddle. There is a white blaze on the head, and a complete or partial white collar on the neck. There may be white on the chest that reaches to the belly and the insides of the legs. The tip of the tail may be white. The white markings may not make up more than one-third of the body color.

Disqualification: Red or black ticking in the white markings. White that covers more than one third of the body. The presence of a fourth color.

Free and energetic at the trot.

(A dog with a Disqualification must not be considered for placement in a conformation event, and must be reported to UKC.)
Unilateral or bilateral cryptorchid.
Viciousness or extreme shyness.
Albinism.
Undershot.
Overshot.
Missing teeth other than the PM 1’s.
Blue eyes.
Red or black ticking in the white markings.
White that covers more than one third of the body.
The presence of a fourth color. 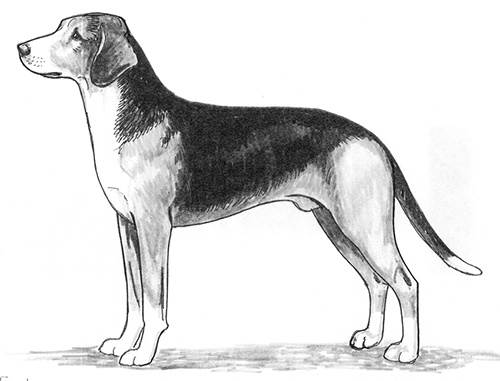