The Scottish Terrier originated in the highlands of Scotland. Although references to small, scrappy “earth” dogs appeared in several of the earliest books on dogs, there are few written records of early breed history. Scotties remained isolated by geography until the late 1870s, when Captain W. W. Mackie toured the highlands, buying Scottish Terriers and writing about them. Predators such as foxes, badgers, rats and other vermin competed with local hunters for scarce game. Scotties were bred to go underground and flush or kill any such creature that went to ground. At first, the breed was surrounded by controversy, with each proponent certain that he alone had the correct breed type. There was even controversy about the breed’s correct name. They were sometimes referred to as Aberdeen Terriers, Cairn Terriers, and Skye Terriers, but as their popularity grew, “Scottish Terrier” was the name that stuck. By the turn of the century, Scotties were appearing in show rings on both sides of the Atlantic. During the 1930s, Scotties were wildly popular. President Franklin Roosevelt’s Fala was the most well-known dog of his era. Today, the majority of Scotties are family companions, but the breed’s feisty character and instinct to dig and hunt are still intact.

The Scottish Terrier was recognized by the United Kennel Club in 1934.

The Scottish Terrier is a small, compact, short-legged, sturdily-built dog of good bone and substance. His head is long in proportion to his size. He has a hard, wiry, weather-resistant coat and a thick-set, cobby body which is hung between short, heavy legs. These characteristics, joined with his very special keen, piercing, varminty expression, and his erect ears and tail are salient features of the breed. The Scottish Terrier’s bold, confident, dignified aspect exemplifies power in a small package.

Although the Scottie is instantly recognizable by his characteristic profile, Scottie temperament is the essence of the breed. The Scottish Terrier is alert and spirited but also stable and steady-going. He is a determined and thoughtful dog whose “heads up, tails up” attitude in the ring conveys both fire and control. The Scottish Terrier, while loving and gentle with people, can be aggressive with other dogs. The Scottie exudes ruggedness and power, living up to his nickname, the Diehard. Judges should always spar this breed in order to properly assess temperament, and no judge should put up any Scottish Terrier not showing real terrier character in the ring. Other key breed characteristics include the long head; the dark, deep-set eyes; the prick ears; the broken coat; the erect, carrot-shaped tail; the short legs; the deep, compact body; the powerful hindquarters; and the characteristic gait.

The head is long in proportion to the overall length and size of the dog. In profile, the skull and muzzle are of equal length, giving the appearance of two parallel planes. There is a slight but definite stop, allowing the eyes to be set in under the brow, contributing to proper Scottish Terrier expression.

The skull is long and, although slightly domed, appears nearly flat in profile. The width of the skull is approximately equal to the length of the skull from occiput to stop. The skull is smooth, with no prominences or depressions and the cheeks are flat and clean.

The length of the muzzle is approximately equal to the length of the skull with only a slight taper to the nose. The muzzle is well filled in under the eye, with no evidence of snipiness. A correct Scottish Terrier muzzle fills an average man’s hand when grasped from underneath. Lips are close-fitting with dark pigment.

Faults: Lack of fill under the eyes; snipy muzzle.

The Scottish Terrier has a complete set of large, evenly spaced, white teeth. A scissors bite is preferred, but a level bite is acceptable. The jaw is square, level and powerful.

The nose is black, regardless of coat color, and of good size, projecting somewhat over the mouth and giving the impression that the upper jaw is longer than the lower.

The eyes are set wide apart and well in under the brow. They are small, bright and piercing, and almond-shaped. The color is dark brown or nearly black, the darker the better.

Faults: Round, protruding or light eyes.

The ears are small, prick, set well up on the skull and pointed, but never cut. They are covered with short velvety hair. From the front, the outer edge of the ear forms a straight line up from the side of the skull. The use, size, shape and placement of the ear and its erect carriage are major elements of the keen, alert, intelligent Scottish Terrier expression.

The neck is moderately short, strong, thick and muscular; blending smoothly into well laid back shoulders.

Faults: Neck too long, too thin, or so short as to appear clumsy.

The shoulders are well laid back and moderately well knit at the withers. The upper arm and the scapula form an apparent 90-degree angle with the upper arm almost as long as the scapula. The elbow joint is well behind the front line of the chest and above the bottom line of the brisket. The forelegs are very heavy in bone, straight or just slightly bent, with elbows close to the body.

Faults: Upright shoulders, short upper arms, out at the elbows.

The body is moderately short, with ribs extending well back into a short, strong loin, deep flanks, and very muscular hindquarters. The ribs are well sprung out from the spine, forming a broad, strong back, then curving down and inward to form a deep body that would be nearly heart-shaped if viewed in cross-section. The topline of the back is firm and level. The croup is relatively flat. The chest is broad, very deep, and well let down between the forelegs. From the front, the body appears to be slung between the forelegs. From the side, the forechest extends well in front of the legs and drops well below the elbow. The lowest point of the brisket is such that an average man’s fist would fit under it with little or no clearance.

The thighs are very muscular and powerful for the size of the dog. The stifles are well bent. The hocks are well let down and perpendicular to the ground. Viewed from the rear, the hocks are parallel to one another. A line dropped from the back of a Scottie’s tail when the dog is standing naturally would just touch the back of the hocks.

The feet are large for the size of the dog, round, and compact, with thick pads and strong nails. The forefeet are larger than the rear feet. Nails should not be cut so short as to make them useless for digging. Dewclaws may be removed.

The tail is about seven inches long, set on high, and never docked. When the dog is alert or moving, the tail is carried erectly, either vertical or with a slight curve forward, but not over the back. The tail is thick at the base, tapering gradually to a point and covered with short, hard hair.

The Scottish Terrier is a double-coated dog, with a hard, wiry outer coat and a soft, dense undercoat. The coat is trimmed by stripping and blended into the furnishings to give a distinct Scottish Terrier outline. The dog should be presented with sufficient length of body coat so that the texture and density may be determined. The longer coat on the beard, legs, and lower body may be slightly softer than the body coat but should not be or appear fluffy. The hair on the skull is short and hard while the hair on the back of the ears is soft and velvety. The Scottish Terrier coat must be sufficiently clean and well-groomed to enable a judge to properly evaluate the dog, but the artfulness of the trimming is not a factor to consider in judging this breed unless all other aspects of the dogs being judged are equal.

Faults: Soft coat; curly coat; clippered coat anywhere other than on the throat, cheeks and back of the ears.

Black, wheaten or brindle of any color. Many black and brindle dogs have sprinklings of white or silver hairs in their coats. This is not to be penalized. Distinct areas of white hair are allowed only on the chest and chin and that to a slight extent only.

The Scottish Terrier has a thick body and heavy bone. Equal consideration shall be given to height, weight, length of back, and length of head. Height at withers for either sex is about 10 inches. For a dog of this height, the head from occiput to nose is slightly over 8 inches and the length of back from withers to set-on of tail is approximately 11 inches. The principal objective is symmetry and balance without exaggeration, so these measurements are not absolute but rather describe ratios between height, length of body and length of head. A well-balanced Scottish Terrier male weighs from 19 to 22 pounds, and a female from 18 to 21 pounds.

Faults: Deviations from ideal size should be penalized in proportion to the degree of the deviation and to the degree that it affects the dog’s ability to do the job it was bred to do.

The gait of the Scottish Terrier is very characteristic of the breed. Viewed from the front, the forelegs do not move in exact parallel planes. Because of the deep, broad chest and the shortness of the legs, the Scottie is required to reach inward as well as forward when trotting. This causes a very slight roll in the front, sometimes referred to as “the Scottie roll.” Scottie movement is free, agile and coordinated with powerful drive from the rear and good reach in front. The action of the rear legs is square and true and both hocks and stifles are flexed with a vigorous motion. When the dog is moving, the topline remains firm and level.

Faults: Lack of reach in front or drive behind; stiff or stilted movement; movement too wide or too narrow in front. 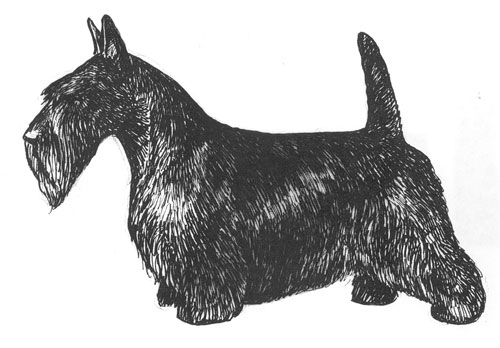