Once known as the "Royal Dog of Scotland,” the Scottish Deerhound was permitted to be owned only by those people holding the rank of Earl or above. The breed was highly regarded for its courage and tenacity as a stag hunter and its loyalty to the clan chieftain and his kin.

The Scottish Deerhound was recognized by the United Kennel Club in 1949.

The Scottish Deerhound possesses the general body formation that is found in the Greyhound, though they are larger in size, heavier in bone and rough coated. Their build suggests the combination of speed, power and endurance necessary to bring down a stag, but their general bearing is one of gentle dignity.

The breed is obedient, friendly and docile. They are willing and easy to train. Scottish Deerhounds should never be suspicious, aggressive or nervous.

The long head is broadest at the ears, and narrows slightly to the eyes. The flat skull has a very slight rise over the eyes, but nothing approaching a stop.

The pointed muzzle tapers towards the nose. A black muzzle is preferred in lighter-colored dogs. The lips are level.

The slightly aquiline nose is black.

The ears are set on high. The smaller the ear, the better. When the dog is in repose, the ears are folded back like a Greyhound’s. When the dog is excited, the ears are raised above the head and, in some cases, may be semi-erect. The coat on the ears is soft and glossy, like that of a mouse's coat. Sometimes there is a silky, silvery coat on the body and tip of the ear. The ears should be black or dark-colored on all Deerhounds, regardless of coat color.

Although the long neck befits the Greyhound character of the Deerhound, it is not to be excessively long as the Deerhounds do not stoop to their work as the Greyhounds do. The mane may detract from the apparent length of the neck. The neck is as strong as is necessary to hold a stag. The nape, where the head is set on, is very prominent. The throat is clean and prominent.

The shoulders are well-sloped, with the blades well back, with not too much distance between them.

The forelegs are straight and broad with flattened bone.

The chest is deep rather than broad, but is not too narrow or slab-sided. Great lung power is indicated by a good chest girth. The loin is well arched and the croup is broad, powerful and drooping to the tail. A flat topline is undesirable.

The hips are set wide apart.

There is great length from the hip to the hock. The stifles are well bent. The bone is broad and flat.

The ideal hair coat is one that is thick, close lying, ragged, and harsh or crisp to the touch. The hair on the body, neck and quarters is harsh, wiry and approximately 3 to 4 inches in length. The hair on the breast and belly is much softer. The hair on the skull is moderately long and softer than the rest of the coat. There is a good mustache of rather silky hair and a fair beard. There is a slight, but not excessive (as in a Collie), fringe on the insides of the forelegs and hind legs. The tail is well covered with thick, wiry hair on the inside. It is longer on the underside and a slight fringe toward the end is acceptable.

Dark blue-grey, darker and lighter greys or brindles and yellows, sandy-red or red fawns with black points. A white chest, white toes and a slight white tip to stern are permissible but the less white the better, since it is a self-coloured dog.

Disqualifications: A white blaze on the head, or a white collar.

Minimum desirable height for males is 30 inches. For females, it is 28 inches. Approximate weight is 100 pounds for males, 80 pounds for females.

(A dog with a Disqualification must not be considered for placement in a conformation event, and must be reported to UKC.)
Unilateral or bilateral cryptorchid.
Viciousness or extreme shyness.
A white blaze on the head.
A white collar.
Albinism. 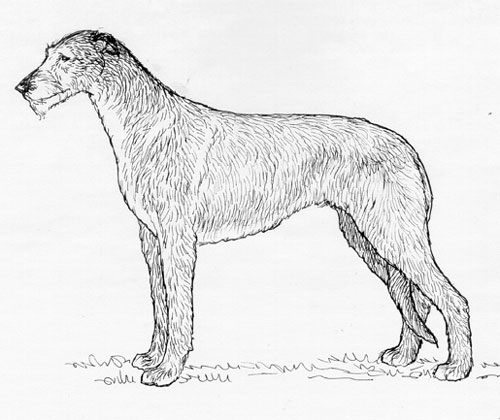