Schipperke means “little shepherd” in Flemish. A small, black sheepdog that was called Leuvenaar was probably the common ancestor of the Belgian Shepherd and the Schipperke. Schipperkes have been used as vermin catchers for many centuries. They became fashionable thanks to Queen Marie-Henriette of Belgium. They were introduced into Great Britain and the USA in 1887.

The Schipperke is a small, solidly built dog, square in proportion, with a wedge-shaped head and a distinctive black coat that grows in a specific pattern. It has a broad, stocky body but its limbs are fine in bone.

The Schipperke is an excellent small guard dog, good at giving alarm, and aloof with strangers. It is active, agile and tirelessly interested in what is going on around it. The breed is gentle with children and useful as a vermin hunter.

The head is fairly broad, wedge-shaped, and not too long. The brows and the cheekbones are moderately arched. The stop is apparent but not exaggerated. The toplines of the skull and muzzle lie in parallel planes.

The skull is wide between the ears, narrowing towards the eyes. In profile, it is slightly rounded.

A full complement of strong, white teeth meet in a scissors bite; an even bite is acceptable.

The small, almond-shaped eyes are dark brown, with black eye rims. The expression is lively and mischievous.

The nose is small and black.

The small, erect triangular shaped ears are set high but not too close together. They are very mobile.

Serious Fault: Any ear carriage other than erect.

Medium length and strongly muscled, the neck is slightly arched at the crest and appears very big due to the abundant ruff of hair.

The shoulder blades and upper arms are long and sloping, which places the front legs well under the body.

The forelegs are straight, fine in bone and set rather far apart. Pasterns are short and nearly vertical. The distance from the elbow to the ground is half the height at the withers. Dewclaws may be removed.

Short, wide and square, with a deep, broad chest and a prominent forechest. The withers are pronounced and the topline slopes gently to the croup, which is broad and appears rounded when viewed from behind. (Known as a Guinea Pig rump). The underline rises gently from the deep chest to the belly, which is only moderately tucked up.

The hindquarters are well under the body with broad, strongly muscled thighs.

Perfectly straight when viewed from behind, with fine bone. Moderate angulation at the stifle and hock joints. Short rear pasterns. Dewclaws should be removed.

Small, round, tight with well-arched toes, and short black nails.

Customarily docked to no more than one inch in length. If natural, the tail will be broad at the base, tapering to the end, and of various lengths and carriages. The tail may be straight, or curled and carried over the back.

Double, with a firm, harsh, straight outer coat, and a soft, thick undercoat. The hair on the ears, head, front of the front legs, and rear legs from the hock to the ground is short. On the body, the coat is moderate in length and close lying. On the neck, starting at the outer edges of the ears, the hair is much longer, forming a ruff, frill and mane on the entire neck and chest, continuing between the front legs and then gradually fading away. On the back of the thighs, the hair is long and abundant, forming culottes. The tips of the culottes point inward. The tail is furnished with hair the same as on the body.
Serious Faults: Coat that is overly long, soft or silky. Lack of the characteristic coat pattern. Fringes of hair on the ears. Total lack of undercoat.

The Schipperke is a solid black dog. Other solid colors (shades of cream, ivory, wheaten, gold, red, white, blue, and chocolate) do occur and are permissible. However, bi-colored dogs such as black and tan, or dilute colors such as blue-cream, are not solid colors and are eliminating faults.

Characteristic gait is firm and supple, with reasonable reach and drive. The topline remains straight. At a slower speed, the legs move parallel to one another. As speed increases, the legs tend to converge.

(An Eliminating Fault is a Fault serious enough that it eliminates the dog from obtaining any awards in a conformation event.)
Bi-colored dogs such as black and tan, or dilute colors, such as blue-cream.

(A dog with a Disqualification must not be considered for placement in a conformation event, and must be reported to UKC.)
Unilateral or bilateral cryptorchid.
Viciousness or extreme shyness.
Any white markings.
Albinism. 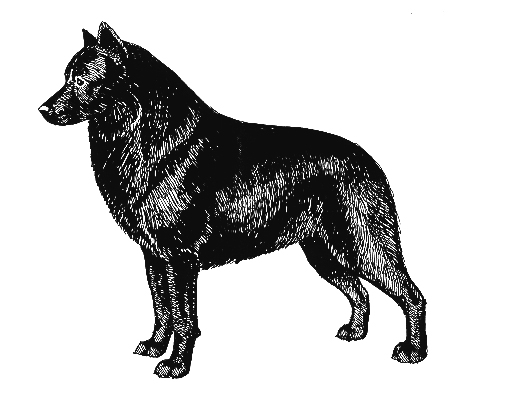