The Schiller Hound originated in Sweden. It is descended from Swiss hounds, along with an infusion of British hound blood, mostly Harrier. It was recognized by the Swedish KC in 1907. The breed is used for hunting fox and hare. It is not a pack hound.

The Schiller Hound was recognized by the United Kennel Club in 2006.

Well proportioned, sinewy and noble, giving the impression of speed and strength.

The head is fairly long. It is triangular in shape, but should never appear snipy.

The skull is broadest between the ears. It is slightly arched. The stop is well defined.

The muzzle is long, and the bridge is straight and parallel to the top of the skull. The lips are tight and close fitting. The cheeks are lean.

The Schiller Hound has a complete set of evenly spaced, white teeth meeting in a scissors bite.

Faults: Any bite other than scissors.

The eyes are dark brown, and have a lively expression.

The high set ears are soft, and hang flat, with the forward edge close to the cheeks. They reach about half way along the muzzle when pulled forward.

The neck is long and powerful. Males should have a well defined arch at the crest.

The shoulder blades and upper arms are long and well laid back, forming a right angle.

The legs are straight and parallel, and the elbows set close to the body. The bone is strong, and the pasterns are springy and slightly sloping.

The body is slightly longer than it is tall. The well developed chest is deep, and the ribs are moderately sprung. The withers are well defined, and the back is strong and level. The loin is muscular and slightly arched, and the croup is long, broad and slightly sloping. There is a slight tuck up.

The hindquarters are strong, muscular, and parallel when viewed from behind.

The stifle and hock joints are well angulated. The rear pasterns are short, lean and vertical.

The feet are oval in shape, with tight, well arched toes.

Set on a line with the back, the tail is broad at the base and tapers to the tip, which should reach to the hock. The tail is preferably carried not above the level of the back.

Harsh, not too short, and very close lying. The coat may be longer on the backs of the thighs and the underside of the tail.

Fault: Undefined mantle with an infusion of tan hairs. 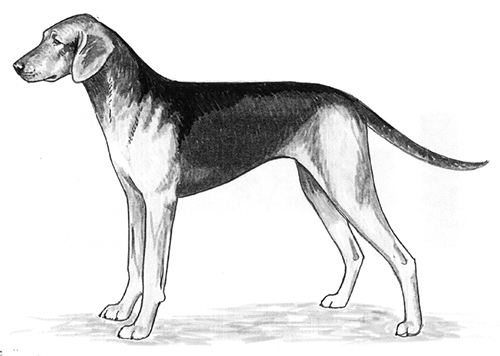