The Sarplaninac (pronounced shar-pla-nee-natz) is an ancient livestock guarding breed from the mountain region of southeastern Yugoslavia, known in Roman times as Illyria. This breed was formerly named the Illyrian Shepherd Dog when first recognized by the FCI in 1939. The name was changed in 1957 to Yugoslavian Shepherd Dog Sharplanina, after the Sharplanina mountain range where the breed is most common.

Like all ancient breeds developed in isolated regions, the origin of the Sarplaninac cannot be determined. It is believed to be descended from the ancient Molossian dogs of Greece and the livestock guarding dogs of Turkey. Although little known in the United States, the Sarplaninac is still widely used in its homeland to protect flocks against predators.

Until 1970, Sarplaninacs could not be legally exported from Yugoslavia. The first to arrive in the U.S. was actually carried down from the mountains by mule. Since then, growing numbers of American and Canadian ranchers have been successfully using Sarplaninacs for predator control.

The Sarplaninac was recognized by the United Kennel Club on January 1, 1995.

The Sarplaninac is a medium-sized dog who looks bigger than he is because of heavy bone and thick coat. Any solid color is acceptable but the most common is an iron gray. The length of body is slightly longer than its height at the withers, and the head is in proportion to the size of the body. Ears are drop and V-shaped and the tail is long and carried like a saber. The Sarplaninac should be evaluated as a working livestock guardian capable of protecting stock in mountainous terrain, and exaggerations or faults should be penalized in proportion to how much they interfere with the dog’s ability to work.

Despite being slightly smaller than many other livestock guarding breeds, the Sarplaninac is characterized by extraordinary strength and large teeth, making it a formidable adversary of predatory animals. This breed has a typical livestock guarding temperament: highly intelligent and independent; devoted to family members and wary of strangers; calm and steady but fearless and quick to react to perceived threats.

The skull is slightly domed and broad between the ears, tapering gradually toward the muzzle. The median furrow is distinct. The supraorbital ridges are only slightly developed and the occiput is not evident. Cheek muscles are well developed but the cheekbones are flat.

The muzzle is broad and deep at the base, tapering slightly toward the nose. The topline of the muzzle is straight except for the tip, which is unusually developed giving an aquiline appearance in profile. Lips are moderately thick, tight, and dry. The upper lip only slightly overhangs the lower lip.

The Sarplaninac has a complete set of evenly spaced, white teeth meeting in a scissors bite.

The nose is broad and black, projecting somewhat over the mouth and giving the impression that the upper jaw is longer than the lower. Viewed in profile, a line drawn from the tip of the nose to the chin slants downward and backward.

Eyes are almond-shaped and of moderate size. Eye color ranges from dark brown to chestnut. The expression is piercing. Eye rims are black.

The neck is of medium length but appears shorter than it is because of the thickness of the coat. The neck is broad and well muscled, and blends smoothly into the head and shoulders. The skin is tight with no dewlap. The crest of the neck is straight or slightly arched. The head is carried slightly above the line of the back.

The forelegs are straight, strong, and sturdy in bone, with strong, broad, slightly sloping pasterns. The length of the foreleg is slightly greater than one-half the distance from the withers to the elbow.

A properly proportioned male Sarplaninac is 8 to 10 percent longer (measured from prosternum to point of buttocks) than tall (measured from the withers to the ground), with a little more length of body allowed in bitches (10 to 12 percent longer). The withers are moderately developed and broad. Whether the dog is standing or moving, the line of the back is strong and level from the withers to the slightly sloping croup. A very slightly sloping topline is acceptable but not preferred. The loin is moderately short, muscular, and deep, with very little tuck-up. The ribs extend well back and are well sprung out from the spine, forming a broad, strong back, then curving down and inward to form a deep body. The brisket extends to the elbow. Viewed from the front, the chest between the forelegs is broad and muscular.

The hindquarters are muscular, wide, and set somewhat wider apart than the forelegs. The rear angulation is slightly more open than the angulation of the forequarters, with the angle of the stifle about 125 degrees and the angle of the hock about 130 degrees. When the dog is standing, the broad rear pasterns are perpendicular to the ground and, viewed from the rear, parallel to one another.

The feet are firm and oval-shaped, with well-arched and closed toes. The nails are strong and dark in color. The pads are tough, elastic, and darkly pigmented. Front dewclaws may be removed; rear dewclaws should be removed.

The tail is a natural extension of the topline. It is thick and muscular at the base and tapers to the tip in a saber shape. A tail of the correct length extends at least to the hock. When the dog is relaxed, the tail hangs down naturally. When the dog is moving or alert, the tail is raised level with, or slightly above, the back. When very agitated, the tail may be raised over the back.

Disqualification: Bobtail (including dogs born with a stump tail or no tail).

The Sarplaninac is a double-coated breed with a long, straight, somewhat rough-textured outer coat, and a shorter, much finer and thicker undercoat. The coat on the head, ears, and front side of the legs is short. The hair on the neck, the buttocks, the tail, and the back side of the legs is longer. This variation in coat length results in a ruff at the neck, a distinct frill at the nape of the neck, breeches on the buttocks and backs of the legs, and a plume on the tail. At the withers, the outer coat should be 4 to 5 inches long and no shorter than 2¾ inches. Skin is moderately thick, elastic and tight all over the body.

Minor Faults: Coat slightly shorter than desired, as long as the feathering is correct.
Disqualification: Coat on the withers shorter than 2¾ inches.

All solid colors are acceptable from white to a very dark brown that is nearly black. The most common color is an iron gray. The color may vary from a darker shade on the top of the head, neck, and body, to a lighter shade toward the extremities, but the change must be very gradual so as not to give the impression of spots or patches of color. The hairs of the outer coat may be tipped in black resulting in a sable color pattern. Tiny white markings on the chest and toes are allowed but not desirable.

At the trot, the Sarplaninac moves freely with strides of moderate length. The back and loin are elastic and springy. As speed increases, however, the width between the legs decreases and the tendency to single track increases until the dog breaks into a heavy, lumbering gallop. When alert, the Sarplaninac moves with determination and purpose toward the object of interest, often with the head slightly lowered and the tail raised above the back.

(A dog with a Disqualification must not be considered for placement in a conformation event, and must be reported to UKC.)
Unilateral or bilateral cryptorchid.
Extreme viciousness or shyness.
Total lack of pigment in lips, nose, or eyerims.
Undershot or overshot bite.
Missing teeth.
Bobtail (including dogs born with only a stump or no tail at all).
Coat on the withers shorter than 2¾ inches.
White spots or patches other than tiny white markings on chest or toes.
Brindle.
Albinism. 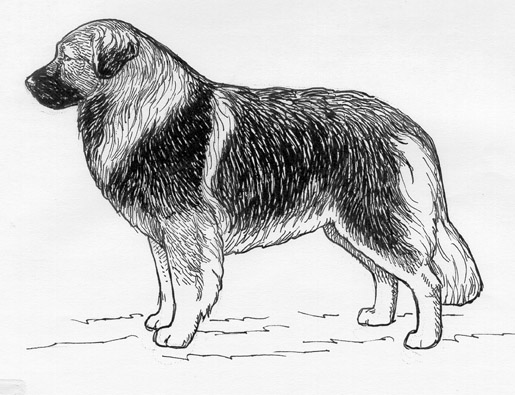