This member of the Spitz family takes its name from the Samoyed people, a nomadic tribe whose survival in the harsh Siberian tundra depended on their hardy white dogs. Samoyed dogs were used to hunt, herd reindeer, and haul sledges. Living in close proximity to their owners, the Samoyed dogs were noted for their gentle good nature. Polar explorers discovered this versatile breed and began importing them to England just prior to and during World War I. English aristocracy adopted the friendly white Samoyed with enthusiasm and, in turn, introduced the breed to the United States.
The Samoyed was recognized by the United Kennel Club in 1927.

The Samoyed is a medium-sized Spitz-type dog with a wedge-shaped head, prick ears, and a profuse white or biscuit-colored double coat. The corners of the mouth are turned up slightly, giving the impression that the dog is smiling. The body is slightly longer than tall, and legs are somewhat long and moderately well boned. The tail is moderately long, covered with long hair, and normally carried over the back, draped to one side or the other. Gender differences in this breed are very apparent. Typically, males carry a heavier “ruff” on the neck, while females may be slightly longer in body. The Samoyed is a working dog, capable of a variety of tasks. Deviations from the standard are to be penalized to the degree they affect the dog’s versatility and agility.

The Samoyed is affectionate, gentle, intelligent and adaptable. They are trusting and eager to please. They are extremely sociable and live very easily with children and other dogs. Samoyeds require lots of interaction with their owners. They are lively and mischievous, even into old age. The Samoyed’s characteristic good nature, combined with his white color and “smiling” appearance, has contributed to the steady popularity of this breed.

The head is proportional to the size of the body. From the front, the head forms a medium-length wedge. Viewed from above, the broad skull tapers very distinctly toward the place where the muzzle joins it and then tapers slightly from the base of the muzzle toward the nose. The skull and muzzle are roughly parallel to one another when viewed from the side, and joined by a well-defined, but not abrupt, stop.

The Samoyed has a characteristic expression that is an essential element of breed type. It is made up of the correct combination of eye color and placement, ear shape and erect carriage, and the upturned corners of the tight, dark lips.

The skull is broad, wedge-shaped, and slightly domed. Lines drawn between the inner corners of the ears and the central point of the stop form an equilateral triangle.

Faults: Round or apple head.

The muzzle is proportionate to the size of the dog and the width of the skull. The muzzle is deep and of moderate length and width. Viewed from the front, the muzzle is well filled in under the eyes, and there is slight tapering toward the nose. Lips are preferably black and tightly closed, with a slight curve upward at the corners of the mouth. This “Samoyed smile” is an essential characteristic of the breed. Whiskers are not trimmed.

The Samoyed has a complete set of evenly spaced, white teeth with a scissors bite.

Black is preferred, but a brown, liver, or Dudley nose is acceptable. Changes in nose color due to age or weather are not penalized.

Shape of the eyes is very important to establish correct Samoyed expression. The eyes are dark brown, almond-shaped, and set obliquely and wide apart. Eye rims are tight and darkly pigmented.

Ears are proportionate to the size of the head and are carried strongly erect. They are triangular in shape, slightly rounded at the tips, and set well apart, but not extending beyond a line drawn upward from the outer edge of the skull. The length of the ear from base to tip is equal to the length of a line drawn from the inner base of the ear to the outer corner of the eye. Ears are highly mobile and expressive. Hair covers the inside and outside of the ears. The hair in front of the ears is full and stands away from the head.

The neck is moderately long, but strong and well muscled, blending into sloping shoulders with a graceful arch. The neck is free of throatiness and covered with a thick ruff of hair.

The shoulders are long and well laid back, with good angulation and well-developed muscles. The shoulder blade and the upper arm are roughly equal in length. The upper arm lies close to the ribs with the elbow moving close to the body. FORELEGS The forelegs are moderately well boned, straight and muscular, with moderately short, moderately sloping, flexible pasterns. The length of leg from elbow to ground should be approximately 55 percent of the dog’s height at the withers. The space between the tips of the shoulder blades is approximately 1 to 1½ inches.

Faults: Very short legs; out at shoulders or elbows; straight or broken-down pasterns.

The Samoyed is about five percent longer, measured from prosternum to point of buttocks, than tall, measured from the withers to the ground. Females may be slightly longer. The withers are the highest points of the back, and blend gracefully into the level back. The loin is very muscular, slightly arched, and of sufficient length to allow for easy movement and powerful drive from the rear. The belly is tight, with moderate tuck-up. The croup is full and slightly sloping.

Faults: Barrel chest; body too long or too short-coupled.

The thighs are strong and muscular.

The rear legs are well angulated at stifle and hock joints. The hocks are well let down. Viewed from the rear, the rear pasterns should be parallel to each other; from the side, they should be perpendicular to the ground.

Feet are large, long, and somewhat flat. Toes are arched and slightly spread but not splayed. Pads are thick and tough with a protective growth of hair between the toes. Feathering on feet may be more profuse on females than males.

Faults: Toeing in or out; round or cat foot; splayed feet.

The tail is set neither high nor low, and of moderate length, reaching about to the hock when straightened out. When the dog is alert or moving, the tail is carried forward over the back or draped to the side, but loosely and without any loss of mobility. When the dog is relaxed, the tail may hang down between the legs. The tail is covered with profuse feathering. When judging the Samoyed, the judge must see the tail over the back at least once.

Faults: Double hook tail; tail snapped tightly to the back; tail set too high or too low.

The profuse, dense, double coat of the Samoyed was essential to this breed’s ability to live and work in the harshest arctic environment. The outer coat is long, straight and coarse, standing away from the body, while the undercoat is short, dense, and soft. The hair on the neck and shoulders forms a protective ruff. Males generally carry longer, harsher coats than females and a more profuse ruff.

Pure white, white and biscuit, cream, or all biscuit.

Disqualification: Any color other than those listed.

The bone of a Samoyed is heavier than might be expected in a dog of this size but is not so massive as to reduce the dog’s speed or agility. The Samoyed should never be so heavy as to appear clumsy or so light as to appear racy. Weight should be in proportion to height and in accordance with these principles.

When trotting, the gait is effortless, smooth, powerful and well coordinated, showing good reach in front and drive behind. The back remains level with only a slight flexing to indicate suppleness. Viewed from any position, legs turn neither in nor out, nor do feet cross or interfere with each other. As speed increases, feet tend to converge toward centerline of balance.

Poor movement should be penalized to the degree to which it reduces the Samoyed’s ability to perform the tasks it was bred to do.

(A dog with a Disqualification must not be considered for placement in a conformation event, and must be reported to UKC.)
Unilateral or bilateral cryptorchid.
Viciousness or extreme shyness.
Any color other than pure white, cream, biscuit, or white and biscuit.
Albinism.
Blue eyes. 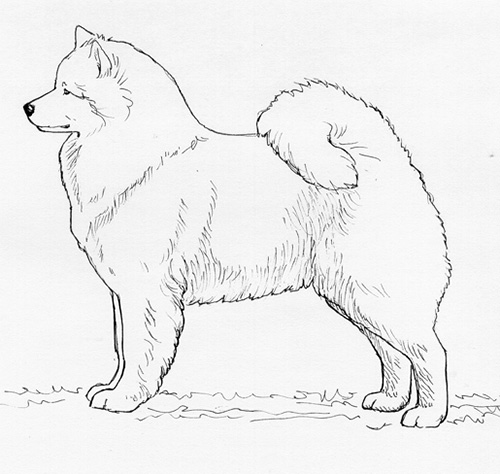