In the 17th Century, the monks of the hospice of St. Bernard in Switzerland began to keep large, alpine farm dogs to serve as guardians, draft animals, turnspits, and bed warmers. The role that made them famous, however, was as finders and rescuers of lost travelers. The thousands of travelers who passed through the hospice made the breed famous but it was not until the middle of the 19th century that a breeder outside the hospice, Heinrich Schumacher, developed a standard and began to keep breeding records of the Saint Bernard. All modern Saints trace their ancestry to Schumacher’s dogs. Saints were introduced to the United States in the late 18th Century.

The Saint Bernard was recognized by United Kennel Club in the 1920s.

The Saint Bernard is a large, massive, athletic dog with a broad head, medium-sized drop ears and a natural tail carried level with the back or with a slight upward curve. The Saint Bernard is nearly square and proportionally tall. The breed comes in two coat varieties, shorthaired and longhaired. In evaluating a Saint Bernard, exaggerations or faults should be penalized in proportion to how much they interfere with the dog’s ability to perform its historical task of alpine rescue.

The Saint Bernard is noted for its large size, great substance, and friendly, eager-to-please temperament. The ideal Saint Bernard is a gentle giant, friendly with strangers and affectionate with his family. This breed is typically not aggressive with other dogs, regardless of sex.

The correct Saint Bernard head is large, imposing and well chiseled. The head is nearly as deep as it is long and is wider than long. Viewed from the side, the ratio of the length of skull to muzzle is 2:1. A median furrow extends from the occiput to the nose. The furrow deepens from occiput to stop where it is strongly marked, then becomes wider and shallow as it runs down the bridge of the muzzle.

The skull is massive, broad and gently arched laterally and longitudinally. The skull is broadest at the zygomatic arch, which is very prominent. The occiput is moderately developed. The supraorbital arches are strongly developed and form a nearly right angle with the horizontal axis of the head. When the dog is alert, the skin above the eyes will form wrinkles, which contribute to proper Saint Bernard expression.

The muzzle is broad, blunt and deep, with no taper in any direction. The muzzle is relatively short, about one-half the length of the skull, and deeper than wide with a ratio of 11:8. The width of the muzzle is approximately equal to its length. Viewed in profile, the bridge of the muzzle is straight. Flews of the upper jaw are strongly developed and slightly overhanging, forming a gentle curve into the lower edge. Lips are black.

Faults: Roman nose, lumps on bridge of nose, folds of skin on top or sides of muzzle, curved bridge of muzzle.
Serious Faults: Absence of median groove on muzzle; flews hanging more than 1½ inches below the lower edge of the underjaw; flews too sharply cut back.

The Saint Bernard has a complete set of evenly spaced, white teeth meeting in a scissors bite. A level bite is acceptable but not preferred. It is desirable for the roof of the mouth to be black.

The nose is broad with nostrils well open. Nose leather is black. In profile, the top of the nose does not rise above the bridge of the muzzle.

Eyes are medium in size and dark brown in color. They are set moderately deep and more to the front of the skull than the sides. Each eyelid has a slight fold, causing the eye to have a diamond-shaped appearance. Expression is kindly and intelligent.

Ears are drop, of medium-size, and set fairly high. The base of the ear is well developed so that the rear edge of the ear leather stands away from the skull while the front edge hangs close to the head. The earflap forms a rounded triangle, slightly elongated toward the point.

The neck is extremely muscular and thick, slightly arched, rather high set, and blends smoothly into the shoulders. The neck is of moderate length but appears short due to its extreme thickness. There is an observable dewlap on the neck and throat.

The back is level to the haunches, then slopes slightly toward the rump. The loin is short, broad and so distinctly muscular that there is a well-defined break between the muscles of the loin and the belly below. The croup is slightly sloping.

The ribs extend well back and are well sprung out from the spine, then curving downward and inward. The ribs in the forward section of the rib cage are flatter to allow for efficient movement. Viewed from the side, the brisket extends to the elbow and the forechest extends in a gentle curve slightly beyond the point of shoulder. Viewed from the front, the chest is well filled and is at least as wide as a man’s closed hand. The belly is firm with very little tuck-up.

The muscles in the upper thigh of an adult male should be so massive that an average man’s two hands cannot span them. When the dog is standing, the short, thick rear pasterns are perpendicular to the ground and, viewed from the rear, parallel to each other.

The feet are large, round and compact with well-arched toes and thick, elastic pads. Feet do not turn in or out. Rear feet are just slightly longer than front feet. Rear dewclaws may be removed.

The tail is set on as a natural extension of the topline. It is thick and muscular at the base and tapers to the tip. When the dog is in repose, the tail just reaches to the hock. It is acceptable for the bottom third of the tail to curve gently upward. When the dog is moving or alert, the tail is carried level with the back or with a slight upward curve. It is never vertical, curled, or tucked between the legs.

The coat is short over the entire dog except that the hair on the thighs and tail is longer and thicker. The longer coat at the base of the tail gradually shortens toward the tip.

The coat is of medium length except that it is longer, but not abundant, on the ears, neck, back of legs, brisket and lower chest, back of thighs and tail. The coat forms a ruff around the head and neck. There is feathering on the forelegs and belly. The coat on the thighs and tail is very bushy.

Feet may be trimmed and stray hairs neatened, but neither the natural appearance of the coat nor the outline of the dog should be altered by trimming.

All shades of red and white; brindle and white; or any shade of brown and white. The following white markings are required: white chest, white feet and tip of tail, white nose band, and white collar or white spot on the nape of the neck. The following white markings are highly desirable: white collar, white muzzle, white blaze between the eyes, white belly and legs, and white on the lower half of the tail. A dark mask around the eyes and dark color on the ears are highly desirable but their absence is not a fault. Black on any other part of the dog is a minor fault.

Fault: Black color anywhere but on the ears and mask around the eyes.
Disqualifications: Solid-colored dog; absence of white; black and white dog; albinism.

The ideal height for an adult Saint Bernard male is 30 inches at the withers and for a female, 28 inches. A one-inch deviation from the ideal is acceptable. A Saint Bernard must be massive, powerful and well boned with hard, firm muscles and moderately dry skin.

Faults: Deviation from the ideal height by more than one inch but less than 2½ inches.

When trotting, the gait is effortless, smooth, powerful and well coordinated, showing moderate reach in front and similar moderation behind. When moving, the dog’s head moves slightly forward and downward. The topline remains level with only a slight flexing to indicate suppleness. Viewed from any position, legs turn neither in nor out, nor do feet cross or interfere with each other. As speed increases, feet tend to converge toward the centerline of balance. It is recommended that dogs be shown on a loose lead and moved at a moderate speed to reflect true gait.

(An Eliminating Fault is a Fault serious enough that it eliminates the dog from obtaining any awards in a conformation event.)
Deviation from the ideal height by 2½ inches or more.

(A dog with a Disqualification must not be considered for placement in a conformation event, and must be reported to UKC.)
Unilateral or bilateral cryptorchid.
Viciousness or extreme shyness.
Nose color other than black.
Blue eyes.
Solid-colored dog.
Absence of white.
Black and white dog.
Albinism. 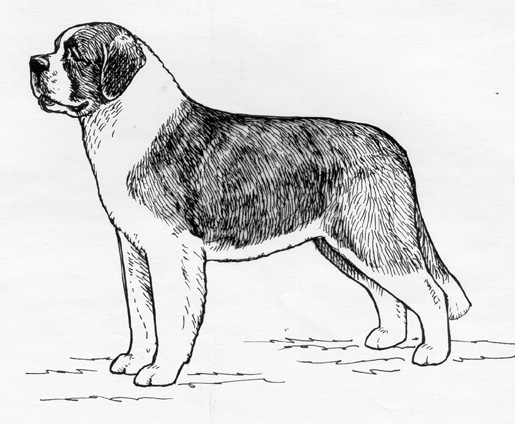