In 1932, a gentleman named Leendert Saarloos crossed a male German Shepherd Dog with a female European wolf. He then bred the offspring back to their sire, and with that pool of dogs he created the Saarloosewolfdog. The breed was not created for any specific working purpose, but rather to be a hardy, self reliant companion and housedog.

The Saarloosewolfdog was recognized by the United Kennel Club July 1, 2006.

The Saarloosewolfdog is lively, energetic and independent. The breed is devoted and reliable with its master but suspicious of strangers. A natural, wolf-like reserve and desire to flee from unknown situations is typical of this breed.

The skull is flat and broad. There is no prominence of occiput or eye socket. There is a slight stop.

The muzzle is the same length as the skull and must balance in size with the skull and never be coarse, which would take away from the wolf-like appearance. The bridge of the nose is straight. The lower jaw is not conspicuous.

The Saarloosewolfdog has a complete set of evenly spaced, white teeth meeting in a scissors bite.

The eyes are a very typical characteristic of the breed. They must be almond shaped, set slightly obliquely, and yellow in color. The desired expression, which is alert and reserved, yet not anxious, can only be achieved with a light eye. Eye color may darken with age but the tendency to a light eye must remain. Brown eyes are less desirable. Round, protruding eyes are very undesirable.

Medium size, fleshy, triangular in shape, with rounded tips, the ears are set on at the level of the eye. They are very mobile. Pointed or very high set ears are undesirable, as are low set ears that are carried too far on the sides of the head.

Dry, well muscled and clean, the neck flows smoothly into the topline. When the dog is in winter coat, the neck is adorned by a beautiful ruff.

The shoulder blade and upper arm are fairly long and meet at a moderate angle.

Straight and well muscled, with oval shaped bone that is not too coarse. The elbows lie close to the thorax without being pressed tight. The carpal joints are strong and the pasterns are slightly sloping. A slight turning out of the forefeet when the dog is standing is allowable.

In proportion, the Saarloosewolfdog is longer than tall. The chest is moderately broad and reaches only to the elbow, not below. The outline of the chest is rather slim and very wolf-like. The back is straight and strong and the ribs are normally sprung. The underline is taut and lightly tucked up.

The angulation of the hindquarters is in balance with that of the forequarters. Due to a lower tail set, the pelvis sometimes appears to slant at a greater angle than it actually does.

The angulation at the stifle and the hock must not be exaggerated. The thighs are of normal length and breadth. The rear pasterns are sufficiently long (not short). Slight cow-hocks are permitted when the dog is standing.

The tail appears slightly low set, which is often accentuated by a slight depression at the set on. It is broad and well coated at the base, and reaches at least to the hock joint. It is carried lightly curved in saber shape, or almost straight. It may be carried slightly higher in excitement but a tail curled over the back is undesirable.

The double coat is profuse in winter, forming a distinct ruff around the neck. In summer, the coarse outer coat predominates, but some undercoat should always be present. It is essential that the belly, inside of the upper thighs and scrotum be fully covered with hair.

Light to dark shaded grey or brown, light creamy white or pure white. In the grey and white dogs, the pigment of the nose, eye rims, lips and toenails should be black. In the brown dogs, it is liver. In the grey and brown dogs, the coat is pale on the whole underside of the body, the inside of the legs and the back of the breeches. On the outside of the legs and the face, the coat is dark. Pale, washed out colors are less desirable, as are dogs with dark saddles.

A tireless, unexaggerated trot, very typical of the wolf. Light footed and unrestricted but without an excess of reach and drive. The head and neck are carried almost in line with the back.

(A dog with a Disqualification must not be considered for placement in a conformation event, and must be reported to UKC.)
Unilateral or bilateral cryptorchid.
Viciousness or extreme shyness.
Albinism.
Any color other than those described in the standard. 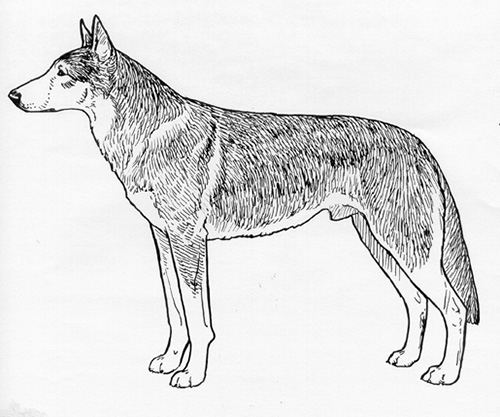