Any departure from the following should be considered a fault, and the seriousness with which the fault should be regarded should be in exact proportion to its degree and its effect upon the health and welfare of the dog and on the dogs ability to perform its traditional work, which includes acting as a functional companion.

At the beginning of the 20th Century, the English Toy Terrier was one of the most popular toy dogs in Russia. However, during the years from 1920-1950, the breeding of this breed was nearly stopped and when it started up again, practically all of the dogs used had no pedigrees and many were not purebred. The new standard for the breed that was drafted in Russia differed significantly from that of the original English Toy Terrier. From that point on, evolution of the breed went its own way and during a long period of development a new breed was created, the Russkiy Toy.
The Russkiy Toy was recognized by the United Kennel Club in 2008.

Active and very cheerful, neither cowardly nor aggressive. Always curious of the outer world; strongly devoted to its owner.
Disqualifications: Viciousness or extreme shyness.

The head is small in proportion to the body. Light, lean; wedge-shaped if viewed from above; occiput is not pronounced.
Disqualification: Open fontanel in dogs over nine (9) months of age.

The skull is high, but not too wide (the width at the level of the zygomatic arches does not exceed the depth of the skull), with a slightly rounded forehead. The roundness should be pronounced but not exaggerated. The stop is clearly pronounced, of medium depth.

The muzzle is slightly shorter than the skull, from one-third to two-fifths of the head, and is lean and pointed, gradually narrowing to the nose. The lips are thin and tight fitting, either dark or matching the coat color. The cheekbones are only slightly pronounced.
Disqualification: Tongue visible constantly when mouth is closed.

The teeth are of medium size and white, and meet in a scissors bite. A level bite extending to two or three pairs of incisors is permitted but undesirable.
Fault: Missing one or two incisors in the upper and/or lower jaw.
Disqualifications: Wry mouth. Overshot or distinctly undershot. Absence of any canine tooth. Absence of more than two incisors in any jaw.

Small, well-developed, with well-open nostrils. The color of the nose is black or matches the main hair color.

Quite large, rounded, expressive, dark and somewhat prominent. They are set well apart and look straight ahead. The eyelids are tightly fitting, and either dark or match the color of the coat. The look is self-interested, clever, curious, and intelligent.

Small and oval, turning neither in nor out. The toes are well-knit and arched. Pads are springy. Nails and pads are black or match the coat color.
Disqualification: Disproportionately short legs.

The chest reaches the elbows; is slightly-flat and oval shape in cross-section. The back is strong and straight. The withers are slightly pronounced, and the topline moderately and gradually slopes from the withers down to the tailset. The loin is short, sufficiently muscled, and slightly prominent. The croup is sloping about 15 degrees to the horizontal line, of medium width, and sufficiently long. The tucked-up belly and drawn-up flanks form a smooth and nicely curved line from the chest to the flanks.
Disqualification: Barrel chest.

Viewed from the rear, the hind legs are straight and parallel, standing a little bit wider than the front legs. Viewed from the side, they are set slightly rearward. The stifles and hocks are sufficiently bent, and are in balance with the forelegs angulation.

The upper thigh is moderately long, and the muscles are lean and developed. The upper and lower thighs are the same length. The hock is of moderate angulation. The rear pasterns are perpendicular to the ground, and parallel to each other.

The toes are arched and well-knit; may be a little bit narrower than the forefeet, turning neither nor out. Pads are springy. Nails and pads are black or match the coat color.
Disqualification: Disproportionately short legs.

Medium length. Sickle or sabre. Without ring or kinks. Set moderately high. In movement, it is desired that it is carried neither lower than the level of the back nor lie on the back. A docked tail is permitted; two to four vertebrae are left.
Fault: Low tail set, tail lying on the back.
Disqualifications: Ring or kinked tail.

There are two coat types: smooth-coated; and long-haired.

Short, close-lying and shiny, without undercoat or bald patches.

The body and neck are covered with moderately long (1 to 2 inches), straight or slightly wavy, close lying hair. The hair on the head and the front of the legs is short and close-lying. There are distinct feathers on the back of the legs and on the tail. In adult dogs the ears are covered with long hair that forms a fringe. The skin is thin and tight-fitting.
Disqualifications: In long-haired dogs: absence of fringes on ears; presence of curly hair; trimmed coat on the body; curly coats; semi-pricked ears without fringes; very soft, tousled, loose body hair; too long hair with pronounced feathering on limbs and tail; trimmed coat. In smooth-coated dogs: numerous bald patches (more than 25 percent).

Easy, straightforward, light and energetic, with moderate reach. The topline is straight, and there is no noticeable change in the topline when moving. Somewhat high in the withers is permitted. The head is proudly held high, and the tail is carried high.

(An Eliminating Fault is a Fault serious enough that it eliminates the dog from obtaining any awards in a conformation event.)
Under 7 inches or over 12 inches.
More than 6 pounds. Less than 3 pounds.

(A dog with a Disqualification must not be considered for placement in a conformation event, and must be reported to UKC.)
Unilateral or bilateral cryptorchid.
Viciousness or extreme shyness.
Open fontanel in dogs over nine (9) months of age.
Wry mouth.
Overshot or distinctly undershot.
Absence of any canine tooth.
Absence of more than two incisors in any jaw.
Tongue visible constantly when mouth is closed.
Dropped ears in long-haired dogs.
Semi-pricked ears in smooth-coated dogs.
Barrel chest.
Disproportionately short legs.
In long-haired dogs: absence of fringes on ears; presence of curly hair; trimmed coat on the body; curly coats; semi-pricked ears without fringes; very soft, tousled, loose body hair; too long hair with pronounced feathering on limbs and tail; trimmed coat.
In smooth-coated dogs: numerous bald patches (more than 25 percent).
Ring or kinked tail.
Albinism.
White spots on the head, on the throat, above the pasterns (front and rear), large white patches on the chest.
Presence of brindle markings.
Any color not specified in the standard.
Under 2 pounds.

The docking of tails and cropping of ears in America is legal and remains a personal choice. However, as an international registry, the United Kennel Club, Inc. is aware that the practices of cropping and docking have been forbidden in some countries. In light of these developments, the United Kennel Club feels that no dog in any UKC event, including conformation, shall be penalized for a full tail or natural ears 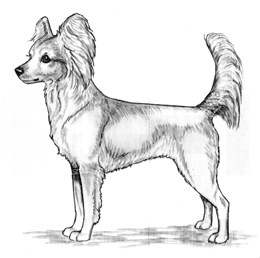