The Russian-European Laika originated in the northern zone of the European part of Russia, between Finland and the Uralian mountains. It is the smallest of the three Laika breeds, and is used as an all around hunting dog on both large and small game, though it was originally used mainly to hunt squirrel. It is closely related to the Karelian Bear Dog, but is smaller, lighter in bone and squarer in build.

The Russian-European Laika was recognized by the United Kennel Club January 1, 1996.

The Russian-European Laika is a medium size, slightly rectangular, strong, dry, agile dog. It has a moderate length, hard, double coat that is either black or dark grey with white, prick ears and small, slanting eyes.

Friendly, affectionate and loyal, extremely tolerant of children. The breed is strongly territorial and may be aggressive towards dogs that invade its territory. The Russian-European Laika has a very strongly developed hunting instinct and a good sense of direction. They are very efficient at trailing and treeing game such as squirrels and marten and bay at the game once it is treed. They may also be used on large game such as bear and moose.

The head is relatively small.

The muzzle is dry, strong and tapering.

The Russian-European Laika has a complete set of evenly spaced, white teeth meeting in a scissors bite.

Small, oval in shape, slanting, and dark in color.

Prick, pointed at the tips, and very mobile.

Muscular and dry, about the same length as the head.

Well-angulated between the shoulder blade and upper arm.

Just slightly longer than tall in proportion, measured from the withers to the ground and the breastbone to the buttocks. The chest is deep and well-developed. The back is strong and muscular, and the loin is short and slightly arched. The croup is broad, short and slightly sloping. There is a marked tuck-up.

The hindquarters are strong and well angulated.

The thighs are long and muscular. There is good angulation at the hock joint. Rear dewclaws should be removed.

The feet are oval, with strong, tight toes.

The tail is either sickle or ringed, carried over the back or buttocks.

Harsh and straight, with a well-developed undercoat. The coat on the face and ears is short and close fitting. It is longer on the neck, withers and shoulders, forming a beard on the cheekbones and a stand-off collar on the neck. The fronts of the legs are covered with short, smooth hair. On the back of the legs the hair is longer, but there is no feathering.

The typical gait for the breed is a gallop, alternating with a short trot. 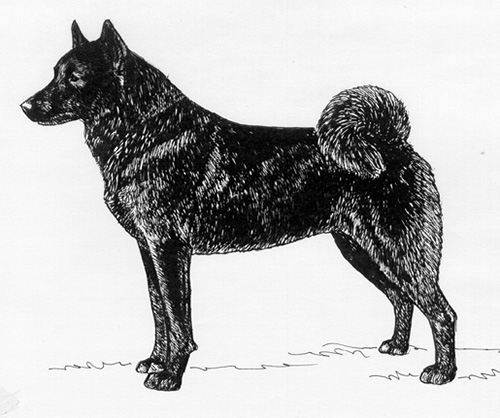