The Romanian Carpathian Shepherd Dog has been used for centuries by the Romanian shepherds in the Carpathian Mountains to defend the herds and guard the camps. Selection was based upon performance rather than breed type until the first breed standard was written in 1934.

The Romanian Carpathian Shepherd Dog was recognized by the United Kennel Club July 1, 2006.

A relatively large dog, rectangular in shape, always giving the impression of agility. Secondary sex characteristics are strongly pronounced, with the males being taller and stronger than the females.

A natural and courageous guard dog, calm, dignified and unconditionally attached to the herd and his master.

Wide and slightly domed, narrowing towards the eyes. Stop must be moderate.

Approximately the same length as the skull, never longer than the skull. Oval in shape with thick, tight, dark lips and lean cheeks.

The Romanian Carpathian Shepherd Dog has a complete set of evenly spaced, white teeth meeting in a scissors bite.

Triangular in shape, slightly rounded at the tips and set slightly above the outer corner of the eye. Carried dropped and close to the cheeks.

Medium length, very strong and carried at an angle of approximately 50 degrees to the horizontal.

The shoulder blades are well muscled and moderately sloping.

Straight, with strong, oval shaped bone and short, slightly sloping pasterns. Length of the foreleg from elbow to ground is one half the height at the withers.

Longer than tall, giving a rectangular appearance. The chest is well developed and deep to the elbows, rather broad. The ribs are well-sprung but never barrel shaped. The back is of moderate length, strong and firm, and the topline is level. The loin is fairly short and muscular and the croup is of moderate length and slightly sloping but never falling away. The underline is gently curving.

Very broad in upper thigh with a moderate length of lower thigh, a firm hock joint and a vertical rear pastern.

Set on relatively high, reaching to the hock, at rest it is carried low or saber-like. When the dog is alert it can be slightly above the topline, but never curled or carried over the back.

Harsh, dense, straight and double. Of moderate length and abundant all over the body, except on the head and the front of the legs where it is short and smooth. Profuse coat is typical on the neck, back of legs and tail.

Pale fawn overlaid with black (wolf grey), often with paler shadings on the under parts of the body. White markings are acceptable but should not be predominant.

Ideal height at the withers for males is 25½ inches to 29 inches; for females it is 23 to 26½ inches. Weight should be in harmony with the size, giving the impression of strength but not heaviness.

Free and long reaching, giving the impression of great endurance.

Any departure from the foregoing points should be considered a fault and the seriousness with which the fault should be regarded should be in exact proportion to its degree. 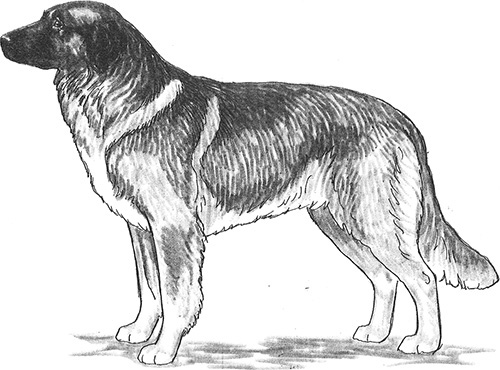