Years ago, most coon hunters who owned a red dog of unknown ancestry, but proven ability in tracking and treeing raccoons, called his dog a “Redbone”. Then a few serious breeders who were devoted both to the breed and the sport began a campaign of selective breeding to produce a hound with the necessary characteristics to make a superior coonhound that would breed true to type in color and conformation.

The foundation stock of the modern day Redbone came from George F.L. Birdsong of Georgia, who was a noted foxhunter and breeder. He obtained the pack of Dr. Thomas Henry in the 1840’s.

As is the case with most of the other coonhound breeds, the ancestors of the Redbone were foxhounds. A Bloodhound cross is said to have been made, and it’s also said that the blood of the Irish hounds was introduced later. This latter cross is said to account for the white chest and feet markings which still occasionally show up in Redbone pups today.

The first dogs were commonly called “Saddlebacks”. The background color was red, and most of them possessed black saddle markings. By selective breeding, the black saddle was bred out and the solid red dogs became known as Redbone Coonhounds.

The Redbone was the second coonhound breed to be registered with UKC, the first one being registered in 1902, two years after the American Black & Tan. Today, of the seven coonhound breeds, the Redbone is probably the most uniform as to type and size. They are coon hunting specialists but also proficient in trailing and treeing bear, cougar and bobcat. Often times, when used on big game, Redbones are hunted in packs.

The Redbone is a medium-sized hound, with a rich, deep red colored coat. He is well-balanced and agile, making him adaptable to various types of hunting and terrain.

This breed is characterized by its pleading eyes and “sweet” voice. They have a natural treeing instinct and make excellent water dogs. They are even tempered and affectionate with a strong desire to please.

Moderately broad, and slightly domed in skull, proportionate to general body size. Muzzle is well balanced with the other features of the head, as long as the skull, with a straight nasal bone, never dish-faced or concave. The planes of the top skull and muzzle are parallel. Stop is well defined but not abrupt. The head gives the general impression of length rather than width.

Set fairly well apart in skull, brown to hazel in color, with the darker color preferred. Round in shape but not prominent. Expression is pleading.

Set moderately low, firmly attached to head. Fine in texture, not stiff, and reaching near the end of the nose when stretched forward. Size in proportion to head.

Chest is both deep and broad, and ribs are well sprung for plenty of lung space. Topline is slightly higher at withers than at hips. Back is strong and straight, loin muscular and slightly arched, with moderate tuck up. Overall proportion (measured from point of shoulder to point of buttocks and withers to ground) is square or slightly longer than tall.

Thighs well muscled and strong. Rear legs straight from hip to foot when viewed from behind, never cowhocked. Dewclaws removed. Moderate angulation at stifle and hock to balance with forequarter. Rear pasterns short and strong.

Set slightly below the line of the back, moderate in length, with a slight brush.

Solid red preferred, small amount of white on brisket or feet not objectionable.

Height at withers for adult males, 22 to 27 inches. For adult females, 21 to 25 inches. Weight proportionate to size and medium build.

The well balanced and agile Redbone moves freely and easily at a reasonable speed with head and tail carried well up.

(A dog with a Disqualification must not be considered for placement in a bench show/conformation event, and must be reported to UKC.)
Undershot or overshot.
Unilateral or bilateral cryptorchid.
Viciousness or extreme shyness.
Albinism.
Any color or combination of colors other than described.
Deaf.
Blind. 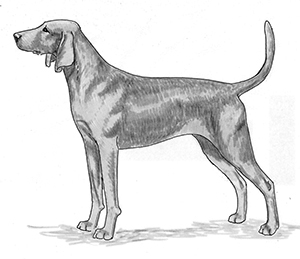