The Pumi came into being during the 17th to the 18th century in Hungary by cross breeding the primitive Puli with imported German and French Terrier type breeds with prick ears. It has been recognized as an independent breed since the beginning of the 20th century.

The Pumi was recognized by the United Kennel Club January 1, 1996.

The Pumi is a lively, medium-sized herding dog with Terrier characteristics. Its Terrier character is most obvious in its head, which has an elongated foreface and semi-prick ears. It is a square breed, with a good amount of leg and a medium length, wavy coat that forms curls. The Pumi comes in a variety of solid colors.

The Pumi is a bold, active dog with a rather restless temperament. He can be a little suspicious towards strangers. The breed is constantly on the alert and looking for action, and can be rather noisy. Shyness is untypical of the breed.

The head is relatively long and narrow. The shape of the head is characterized by the elongated muzzle. The jaws are strong. The cheeks are well-muscled.

The top of the head is relatively broad and domed. The long forehead is only slightly domed and flat, seen from the side. The supercilliary ridges are moderately developed. The stop is barely perceptible, the forehead running in an almost straight line between the eyebrows towards the bridge of the nose.

The bridge of the nose is straight. The elongated facial region tapers toward the nose, but is never pointed. The length of the muzzle is slightly less than one half the entire length of the head. The lips are tight-fitting, and have dark pigment.

The Pumi has a complete set of evenly spaced, white teeth meeting in a scissors bite.

Serious Fault: Missing teeth, with the exception of the M3’s, which are disregarded.
Disqualifications: Overshot, undershot, or wry mouth.

Narrow, bluntly cut off. It is always black.

The medium size, oval-shaped eyes are set moderately wide apart, and slightly oblique. They are dark brown in color. The eyelids are close fitting and dark in color. Expression is lively and intelligent.

The ears are V-shaped, set on high, and carried upright, with the top third bending forward. The ears are very mobile and show alert reaction to all stimulation.

Disqualifications: Completely upright ears. Hanging ears. Ears that do not match in carriage.

The neck is approximately the same length as the head. It is well muscled, clean, slightly arched at the crest and is carried quite upright.

Long and gaunt, with the elbows close-fitting to the body and the pasterns upright. The length of the leg from elbow to ground is slightly more than half the total height at the withers.

The Pumi is exceptionally lean, with taut muscling. The chest is deep rather than broad, reaching to the elbow and the forechest is not pronounced. The ribs are slightly arched. The withers are high, sloping to a back that is short and straight. The loin is short and firmly coupled. The croup is short and slightly sloping. Tuck up is apparent.

The hindquarters are strong and muscular, with the hind legs somewhat extended behind the rear when viewed from the side.

The upper thighs are long and sloping. The stifle joint is on a plane approximately the same as the elbow. The lower thigh is long and dry. The hock joint is clean and dry and the rear pasterns are short and steep.

The feet are round and tight, with springy pads and nails that are black or slate grey.

The tail is set high and carried in an open circle above the croup. It is well covered with wiry hair that stands off.

The wavy or curly coat is one and one half to three inches long. The coat is always tufted and shaggy, never smooth nor corded. It is dense and double, with a strong, but not coarse, topcoat and a soft under coat. There is wiry hair, of medium length, on the ears that grows upward. The eyes and foreface are free of long hair. The body coat should be prepared by hand. Scissoring of the face and legs is allowed, but the entire body coat should not be trimmed with scissors.

Solid colors of white, black, varying shades of grey, and fawn. The fawn may run from cream through yellow to red, and a trace of black or grey and a distinct mask are desirable on the fawn colors. A small white spot on the chest, or a white line on the toes, is not a fault.

Disqualifications: Chocolate color. Multi-colored coat. Any clearly defined patching in coat, such as tan markings or a mantle or saddle on the body.

Very Serious Fault: Height over or under the above specifications.

At a trot the gait is bold and spirited, with a short stride that is light-footed and harmonious. The dog puts his rear feet exactly into the footprints of his front feet.

(A dog with a Disqualification must not be considered for placement in a conformation event, and must be reported to UKC.)
Unilateral or bilateral cryptorchid.
Viciousness or extreme shyness.
Albinism.
Overshot, undershot, or wry mouth.
Completely upright ears.
Hanging ears.
Ears that do not match in carriage.
Docked tail, or natural bob tail.
Short, smooth coat.
Overly long, matted or corded coat.
Chocolate color.
Multi-colored coat.
Any clearly defined patching in coat, such as tan markings or a mantle or saddle on the body. 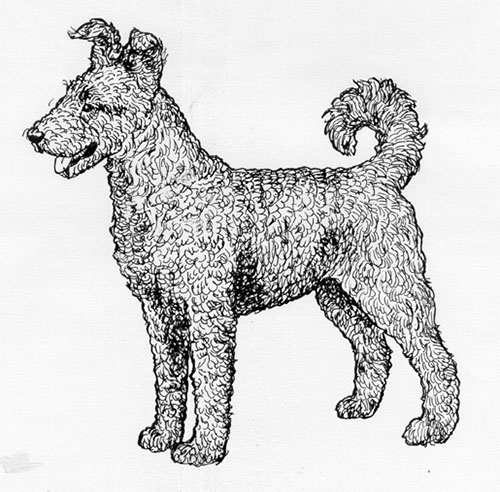