The Puli is an ancient Hungarian breed of Asiatic origin, perhaps descended from the Tibetan Terrier. The Puli has been a part of the lives of the Hungarian shepherds for 1,000 years. When sheepdogs were being developed, color and size played a part in defining their jobs. The larger, lighter colored dogs were used to guard the flocks at night and the smaller, darker colored dogs, the Pulik, were used to drive and herd the sheep during the day.

The Puli was first shown at the Budapest dog show in 1923.

The breed was recognized by the United Kennel Club in 1948.

The Puli is a medium-sized, compact, square dog with a distinctive shaggy appearance. Its unusual corded coat is the result of many years of natural development, and of having to adapt to outdoor living and extreme climatic conditions. The profuse coat makes it difficult to judge the breed by visual examination only; therefore it is important to carefully touch the dog when judging. The actual dog is lean, muscular and fine boned.

Agility and soundness of mind and body are of prime importance, as these characteristics are indicative of the breed’s original function.

The Puli is an affectionate, intelligent and home-loving companion by nature, but is also aloof and sensibly suspicious, making it an excellent watchdog. The breed is vigorous, alert and active.

The slightly domed skull is smooth, moderately wide and rather small and fine. The stop is defined, but not abrupt.

The muzzle is one third the total length of the head. The nasal bone is straight, and the muzzle is not pointed.

The nose is rather small, and always black.

Pendant, with a broad base. Set somewhat high, the ears are V-shaped with rounded tips.

The medium-length neck is strong, muscular and free from throatiness. It forms an angle of approximately 45 degrees to the horizontal.

The shoulder blades are clean and sloping, forming an angle with the upper arm of 100 to 110 degrees.

The elbows lie close to the brisket. The forearm is long and straight, with dry muscles.

The withers are slightly higher than the level of the back. The medium length back is level and strong. The loin is short, strong and moderately tucked up. The croup slopes slightly towards the root of the tail.

The chest is deep, and the ribs are long and well-arched. The depth of the brisket is slightly less than one-half the height at the withers.

The hindquarters are well developed and muscular, with the angle of the pelvis and femur matching that of the forequarter.

The upper and lower thighs are long and well muscled. There is moderate angulation at the stifle joint. The hock is clean and dry and the rear pasterns are short and perpendicular.

The feet are round and compact, and have well-arched toes and thick cushioned, springy pads. The pads and strong nails are black or slate gray.

Set on at the base of the slightly sloping croup, the tail is well covered with dense coat and carried in a flat curl over the croup. When stretched out it should reach to the hock.

Serious Fault: Tail carried in a sickle shape or horizontally.

The puppy coat is dense, wavy or curly. As the dog grows, the coat develops into tassels and cords. It is important that there be a coarse topcoat and a finer undercoat, and that the two be in the proper relation to one another to produce the cords. The cords are longest on the loin, croup and back of rear legs, shortest on the head and limbs. The Puli may be shown either corded or brushed, but it is important that the proper texture and ratio of the two coats be readily apparent.

Rusty black (reddish-black), black, gray-reddish-black, all shades of gray, and white are the acceptable colors. The colors should always appear solid, but a white spot of not more than two inches is permissible on the chest and white toes are not a fault. An intermixture of gray, black or white hairs may be found in the black and gray-colored dogs. This is acceptable provided the overall appearance of a solid color is maintained.

The skin is fully pigmented with a blue, blue-gray or slate-gray, depending on the coat color of the individual dog.

Disqualifications: Parti-colors. Large markings of any color (other than the spot on the chest which may be no larger than two inches).
Serious Faults: Any undesired markings or patches of coat color.

Serious Fault: Dogs over or under the desired size range.

The Puli is light, quick, agile and able to change directions quickly. The gait is especially distinctive at a collected, or contained, trot, being animated and quick stepping. It is not far reaching, but is in no way mincing or stilted. As speed increases, the dog tends toward single tracking. The Puli’s distinctive movement is indicative of the breeds herding style and heritage. 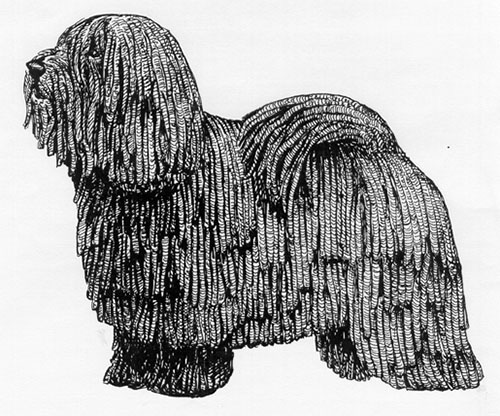